iStock.com/kadmy
Share this post on:
More Great Content:
Discover the 10 Largest Pigs in the…
Wild Boar vs Pig: What are the…
Hog vs Pig: 6 Main Differences
What Do Pot Belly Pigs Eat? What…
The Largest Prehistoric “Pig” Was Taller Than…
Pig Lifespan: How Long Do Pigs Live?

There are lots of sayings about pigs. “You can’t fatten the pig on market day. You can put wings on a pig, but you don’t make it an eagle. Pork is a nice sweet meat.” Okay, that last one is a line from Babe, but you get the point. Pigs have served a central role in both food and popular culture for thousands of years. In fact, until just a few years ago, pork was the most widely eaten animal meat consumed by humans. This reminds us, there’s also another saying that many people associate with pigs. Stop us if you’ve heard this one: “pigging out.” The phrase is used whenever people gorge themselves until they’re almost bursting and stems from pigs’ notoriously large appetites. That said, it doesn’t clarify exactly what it is that pigs are “pigging out” on. Do you know the answer to “what do pigs eat?”

If you’re ever wondered what it is that pigs eat, then you’ve come to the right place. Today, we’ll explore what pigs like to eat, and cover some of their favorite foods. We’ll also explain how pigs find food, as well as how they eat and digest. Additionally, we’ll examine what pigs eat in the wild versus what domestic pigs eat. Finally, we’ll take a moment to discuss the dietary requirements of baby pigs. So, get ready to pig out on some facts about pigs as we learn all about what do pigs eat.

It’s a common misconception that pigs can live on just about anything. This stereotype is reinforced in popular language, as we often call poor quality food slop or food “fit for pigs.” In reality, while pigs are omnivores, they require a well-balanced diet in order to thrive. Don’t get us wrong, pigs will eat just about anything you put in front of them, but that doesn’t mean they should or will. Many pigs can actually be quite picky, and will often refuse to eat foods that they don’t find appetizing. Both wild and domesticated pigs will often seek out foods that they like best and ignore foods they don’t like. In this manner, pigs are very similar to humans. Like us, they have a well-rounded digestive system that allows them to eat a variety of plants and animal foods. Pigs eat leaves, flowers, vegetables, roots, eggs, fish, and even dead animals. We’ve compiled a more detailed list of some of pigs’ favorite foods. Here are 11 foods pigs like to eat:

How Do Pigs Find and Consume Food?

Fortunately for domestic pigs, they don’t have to worry about finding their own food. All these pigs have to do is point their snout into their food trough and tuck in. However, wild pigs don’t have it so easy. Historically speaking, pigs had to rely on their senses to forage for food in the wild, all while avoiding predators. To accomplish this task, pigs often relied on their greatest attributes – their sense of smell and hearing. Pigs are foragers and use their snouts to root around and find food. With their excellent hearing, pigs can pinpoint sounds and will turn their heads upon hearing a noise that interests them. As for their sense of sight, while they have panoramic vision, they struggle with short-range vision and also find it difficult to distinguish colors. It’s no wonder that you often see pigs leading with their noses as they hunt for food.

Pigs possess a simple digestive system, similar to humans. While they have only one stomach, it is well-adapted to eat many different kinds of foods. Upon finding a tasty morsel, a pig will smell it with its snout before chomping down. Adult pigs have mouths that contain up to 44 teeth, including incisors, canines, premolars, and molars. Like humans, their teeth are coated with enamel, which helps to prevent tooth decay. Their small, sharp teeth help them to rip apart different tough foods, while their molars are suitable for grinding and chewing. Once the food is small enough, a pig will swallow and move food down the esophagus and into the stomach. There, digestive enzymes will start to break down food into smaller particulars before moving into the small intestine and eventually the colon. Finally, any leftover food is expelled as waste.

What Do Pigs Eat in the Wild?

Wild pigs are well-adapted to live just about anywhere. You can find them in grasslands, forests, savannahs, scrublands, and wetlands on every continent except Antarctica. Given that they are opportunistic omnivores, wild pigs will eat just about anything they can find. That said, the bulk of their diet consists of plants such as roots, grasses, leaves, and grains. As foragers, they spend most of their time rooting around for bulbs and roots. They’ll also eat large amounts of nuts, seeds, and fungi such as mushrooms. Wild pigs also eat worms, insects, and larvae, which provide suitable amounts of protein. When available, they will also eat the eggs of other animals, and will even eat small mammals. Common mammals that they eat include mice, rats, rabbits, hares, and even young deer. On rare occasions, they will also eat small reptiles such as lizards or snakes as well as amphibians like frogs.

What Do Domestic Pigs Eat?

Unlike wild pigs, domestic pigs do not have to forage for food. Most domestic pigs alive today are raised on factory farms. On these farms, pigs usually eat a specially formulated diet containing different grains and cereals. These feed meals help the pigs to put on weight quickly so that they can head to the market for butchering. Some of the most common meals to put in pig feed include soybean, corn, barley, and wheat. In addition to being fattening, these foods are also grown in abundance, which makes them relatively cheap. That said, pet pigs and pasture-raised pigs may eat a wildly different diet from pigs raised on factory farms. While they may also eat commercial pig feed, they may also get more whole fruits and vegetables as well as insects, fungi, and special snacks. Here are some safe foods that you can feed to a pet pig:

Other acceptable snacks include unsalted nuts, rice, yogurt, quinoa, oats, and unsalted seeds. However, there are certain foods that you should avoid feeding your pet pig. These foods are either toxic or simply not good for your pig’s health. Unacceptable foods include:

What Do Baby Pigs Eat?

Baby pigs, or piglets, are born after around 114 days of incubation. At birth, they weigh between 2 to 3 pounds and are reliant upon their mother for food. On average, baby pigs nurse for around 6 to 8 weeks. That said, they can start to eat solid food around 1 to 2 weeks old. If you’re raising a piglet without its mother, you can feed it a milk replacer. Alternatively, you can use goat’s milk. Once a baby is old enough to tolerate solid food, you can mix pellet pig food into the milk to soften it. Prior to weaning, baby pigs will start to eat solid foods such as soft vegetables and roots. However, they usually won’t transition to a solid-only diet until around 9 weeks at the earliest. After about nine weeks, a young pig will eat the same foods as a fully grown adult pig. 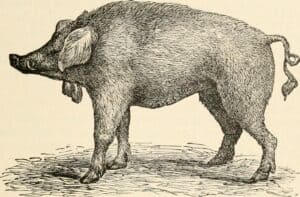 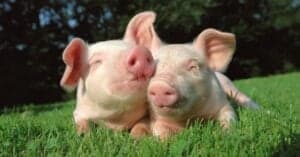