The hooves of the addax are splayed and have flat, springy soles, one of the adaptations that help it walk over sand.

Click through all of our Addax images in the gallery. 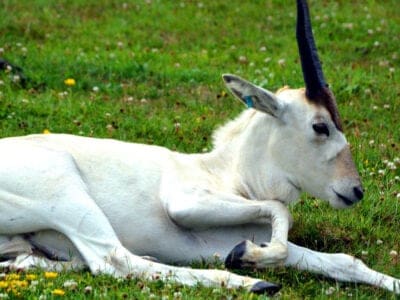 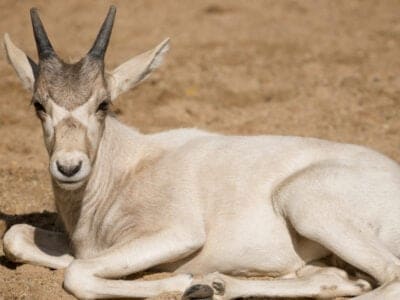 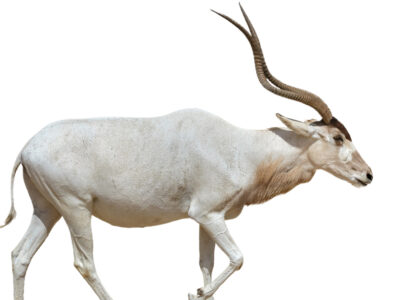 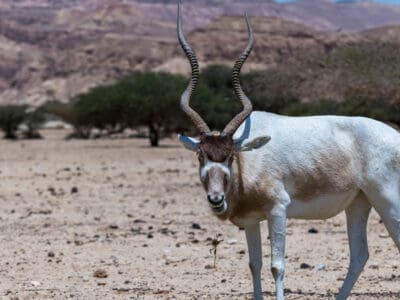 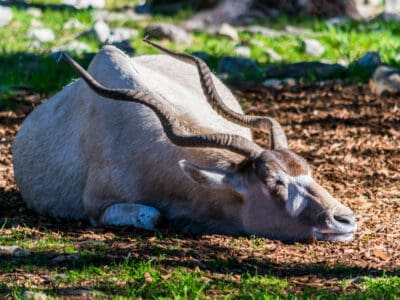 View all of the Addax images!

This beautiful antelope, also called the screwhorn or white antelope once ranged over the Sahara Desert. Now it is on the edge of extinction due to poaching, climate change, overhunting, and habitat destruction. Fortunately, efforts are being made to return its wild population to healthy numbers. Read on for more facts about the addax.

Here are five facts about this superb but endangered antelope:

The white antelope’s scientific name is Addax nasomaculatus. Addax is believed to come from an Arab word for “crooked horn.” Nasomaculatus comes from the Latin nasus for “nose” and maculatus, which means “spotted.” So the name Addax nasomaculatus probably translates as “animal with crooked horns and spotted nose.” There are only one species of addax.

The addax is noted for the beautiful color of its coat and especially its spiral horns. Males are a little bigger than females and stand about 41 to 45 inches at the shoulder compared to females, who stand 37 to 43 inches at the shoulder. Males are also heavier and weigh between 220 and 276 pounds, while females weigh between 130 and 200 pounds. The animal’s sense of smell and peripheral vision is excellent, two adaptations that help them follow the rains.

The coat of A. nasomaculatus changes with the seasons. It is mostly gray-brown in winter with white legs and rump. The coat turns almost entirely white or blond in the summer. There is a tuft of brown hair on the head between the horns, and this flows down into a mane. There are patches on the nose that make an X shape on the face. The animal also has a beard, notably red nostrils, and a short tail that ends in a black tassel.

The addax’s legs are short, and though the legs and feet are built for endurance they are not built for speed. To onlookers, it seems as if the animal’s “knees” hardly bend as it moves. This makes it easy prey for predators such as lions, hyenas, and humans. The horns can be as long as 33 inches, though the longest horns were 43 inches in length. The horns have 30 to 35 ridges in the center and the bottom. Males use their horns to spar with other males over females.

Addax lives in herds, which some biologists claim are headed by the alpha male while others claim are headed by the alpha female. They do know that females sort themselves into a hierarchy, with the oldest females being dominant. The males establish territories and guard the females within them. Though herds used to be large, nowadays they are made up of five to 20 individuals. Addax herds travel long distances to find vegetation, following the rains.

Interestingly, Addax is largely nocturnal, as the cooler night temperatures make it easier for them to move around. In the heat of the day, they excavate depressions in the shade and lie down in them. Their light-colored coats also reflect the heat and keep them cool.

A. nasomaculatus is a creature of the desert, but it also migrates to savannas and grasslands. Unfortunately, it has been extirpated from the areas where it used to range freely such as Egypt, Mauritania, and Western Sahara.

The white antelope eats grasses, including tussocks, wiregrass, and the seeds of panic grass. It will eat the leaves of small trees and shrubs if the grass is unavailable. These plant foods give the animal enough water so that it doesn’t have to drink.

Because they can’t outrun their predators, Addax has always been subject to predation by carnivores such as leopards, hyenas, and cheetahs. Even if they could run fast, they were never a match for the humans who valued their meat and their hides or simply wanted to put their heads with their magnificent horns on their walls. Because of this, the antelope’s population has been shrinking since the middle of the 19th century, and it is now critically endangered. However, there are thousands of addax in zoos and private menageries, and conservation strategies have been adopted in several countries, including Algeria and Morocco.

Addax also tends to harbor parasites when conditions are moist. The most common parasite of the antelope tends to be types of nematodes.

The female addax is ready to breed when she’s about one a half years old, and the male is ready when he’s about three. Since males guard females in their territory, the dominant male mates with the fertile females in his herd. Though addax can breed throughout the year, they mostly do so in the earliest spring or late winter. The female gives birth to one calf after a pregnancy that’s a little less than nine months. Calves weigh about 11 pounds at birth and are weaned when they are about seven months old. The female goes back into estrus just a couple of days after giving birth.

There are probably 500 or fewer of these antelopes remaining in the wild, though there are probably thousands in zoos or private menageries. Breeding programs have been established to help the wild populations, and addax has been reintroduced into regions where they were once abundant such as Tunisia’s Bou-Hedma National Park and the Grand Erg Oriental in the Sahara Desert.

Are Addax carnivores, herbivores, or omnivores?

What is an addax?

Addax is a rare antelope found in the deserts of northern Africa. It is known for its coat, which turns white in the summer, and its long, spiral horns.

What food does the addax eat?

Wild addax enjoys a diet of grasses, which gives them enough moisture so that they never have to drink water. They also eat Cornulaca, even though the plant is spiny. If grasses aren’t available, the antelope will browse the leaves of acacia trees and other shrubs.

Why is the addax endangered?

The white antelope is endangered because of poaching and the destruction of its habitat. Even climate change has impacted these tough animals, as desertification of their old grazing grounds has destroyed the grasses they used to eat. Even an addax can’t live on sand.

How many addax are left in the wild?

There are about 500 left in the wild according to the IUCN.

Where do addax live?

Besides zoos and ranches, addax now lives in pockets in deserts and semideserts in northern African countries such as Mauritania and Sudan.