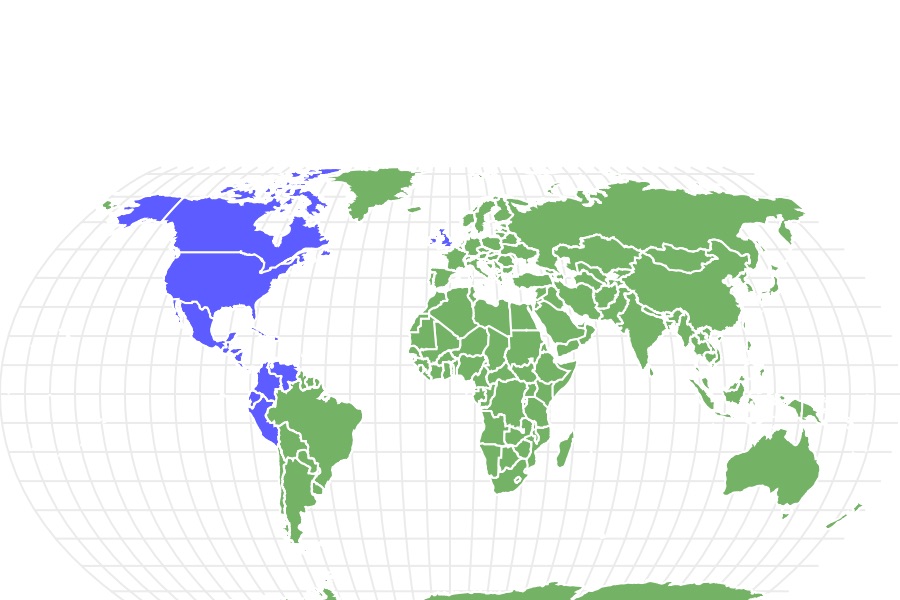 View all of our Black and White Warbler pictures in the gallery.

View all of the Black and White Warbler images!

“The black and white warbler spends winters in Jamaica hiding in coffee plantations.”

Where to Find the Black and White Warbler

This New World warbler has a wide-ranging habitat and migration. It breeds in Northern and Eastern North America and winters in the Southern parts of the United States, Central America, the West Indies, and the Northern region of South America. In extremely rare cases, you can find it in Western Europe.

This species occupies many habitats, and they change depending on the season. During summer, the black and white warbler prefers deciduous, mixed, or swampy forests, preferably among mature trees. While migrating, they like to stop in forests near riparian areas (the interface between land and river). Its wintering habitat varies from mangroves to cloud forests; Researchers have also witnessed this species taking cover in coffee plantations in Jamaica. You will often find these birds perched on trunks and major tree limbs, looking for food or taking shelter.

Females search for well-hidden areas to place their nests, primarily on the ground next to a tree, large rock, bush, or fallen log. She may occasionally build them on a tree stump, a rock crevice, or a mossy bank. You can also expect leaf litter and twigs covering the nest for concealment. It is a round, open cup shape made from dried leaves, bark strips, coarse grass, and pine needles. The inside is lined with moss, grass, and horse hair. The nest measures five inches in diameter and five inches high.

The black and white warbler (Mniotilta Varia) is a species of wood warbler in the Parulidae family. And because of its foraging adaptations, it’s the only one in its genus. It is closely related to the Satophago genus and is known to hybridize with other warblers like the cerulean and blackburnian. Its genus name (Mniotilta) is Ancient Greek, meaning “seaweed” and “to pluck.”

Warblers are small songbirds, and black and white warblers are medium-sized within this species. It’s about the size of a chickadee, with a flat head, a short neck, long wings, and a short tail. Its bill is fairly long and slightly curved downward. Adults measure between 4.3 and 5.1 inches and weigh around 0.5 ounces with a 7.1 to 8.7-inch wingspan. They have bold black and white stripes with black wings and white bars. The males are more heavily streaked in black, while the females are paler and less streaky.

These warblers are well-known for their tree-foraging behavior and more closely favor a nuthatch. They sneakily hop around branches and trunks, looking for insects inside the bark. You may even see it taking off after flying insects.

This warbler migrates short or long distances. It breeds in the Eastern and Northern United States and Canada, migrates mainly through the Midwestern states, and winters in Florida, Central America, Northern South America, and the West Indies. These neotropical migrants are one of the earliest spring travelers, marking the beginning of a new season.

The black and white warbler forages on tree bark, looking for insects.

What Does a Black and White Warbler Eat?

This warbler moves up and down the tree as it searches for spiders and other arthropods, like ants, beetles, flies, leafhoppers, and weevils. During breeding and migration, the black and white warbler relies heavily on moth and butterfly larvae.

For now, the IUCN lists the black and white warbler as “least concern” due to its wide-ranging habitat and the number of individuals. However, they are several threats that could potentially cause problems for this creature in the future.

As the climate continues to warm, the warbler could face spring heat waves and heavy rainfall, which can endanger young birds and impede adults from feeding their babies. Other threats include loss of habitat from urbanization and pesticides, which have caused population decreases since the 1970s.

What Eats the Black and White Warbler?

Because this species is a ground-nesting bird, it is vulnerable to attack from various predators, including other birds and mammals like squirrels, chipmunks, and raccoons. Blue jays and birds of prey like hawks can be problems for warblers.

Males get to the breeding grounds before the females, and during courtship, the males sing and flutter about to attract a mate. Once they’ve made a selection, the female will show the male around her potential nesting spots before she constructs it. Females lay four to six off-white eggs with brownish specks, and she incubates them for 10 to 12 days.

The babies are fed by both parents and leave the nest eight to 12 days after hatching, well before they know how to fly. But the pair will help them fend for themselves while they work on their flying skills. The brown-headed cowbird will sometimes parasitize the black and white warbler’s nest, meaning they will trick the warbler into raising their young.

As of 2020, there are over 18 million black and white warblers in the wild. Their population is considered current with no major fluctuations. However, they are going through a moderate decline, declining at a 10% rate over the last ten years. But short-term trends suggest it is not a significant issue. Its number one ongoing threat is climate change and severe weather, which puts stress on the species and reduces their reproductive success.

Do black and white warblers migrate?

Yes. they spend warmer months in Eastern and Northern United States and Canada, migrating to Florida, the West Indies, Central America, and Northern South America during the winter.

How many eggs does the black and white warbler lay?

They late between 4 and 6 eggs.

What is the black and white warbler's wingspan?

When do black and white warblers leave the nest?

Chicks leave the nest 8 to 12 days after hatching. Parents care for them until they get the hang of flying though.

How rare are black and white warblers?

These warblers are quite common. They have a wide-range and over 18 million in their population.

Are black and white warblers rare in the UK?

Actually, yes! these birds primarily inhabit areas around the Americas. There have only been 14 sightings of the black and white warbler in the UK.

Is the black and white warbler endangered?

The IUCN lists its status as “least concern.”

What do black and white warblers eat?

Their primary food source is insects and moth and butterfly larvae.