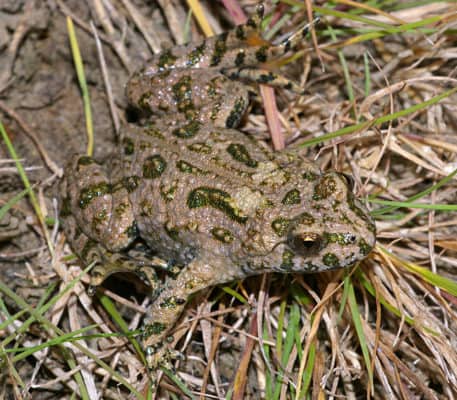 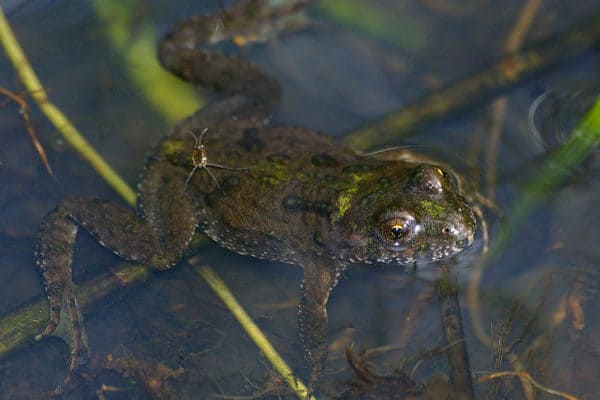 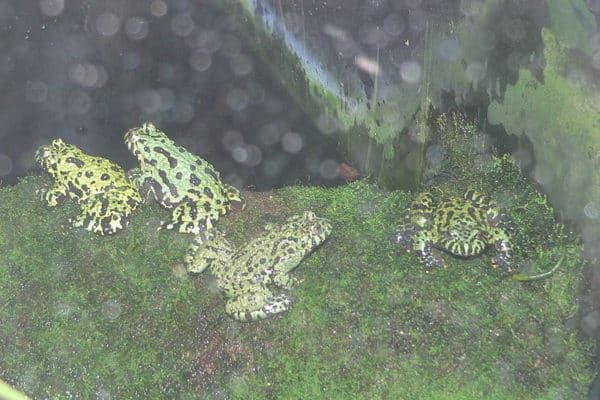 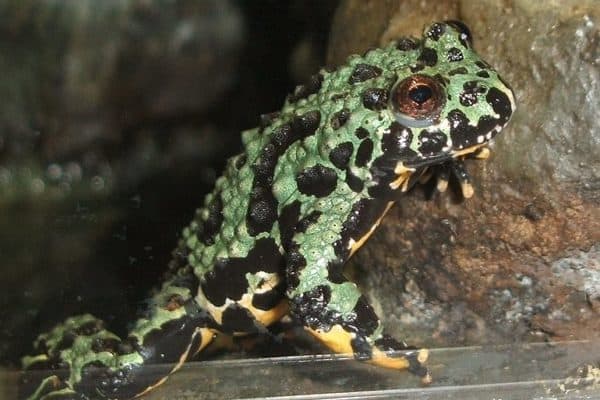 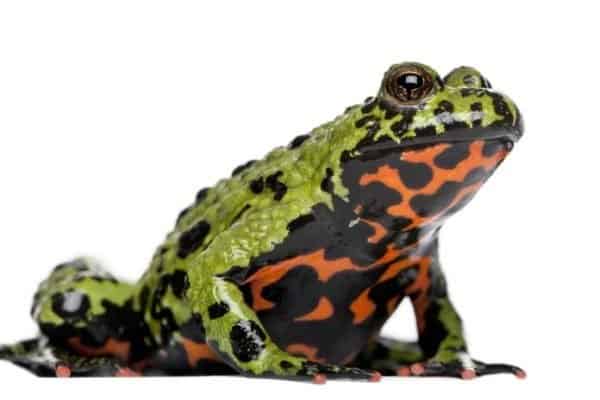 “The croak of a fire-bellied toad sounds a lot like a dog barking.”

The fire-bellied toad lives in northeastern parts of China, North Korea, South Korea and parts of Russia. This toad has an underbelly made up of bright red/orange and black splotches. An adult toad measures about 2 inches long. Though they only eat plant life as tadpoles, they evolve into omnivores as adults, eating a variety of insects and snails. Usually, they live for about 12 to 15 years in the wild and longer in captivity.

• Poison contained in their skin’s pores serves as protection against predators.
• They use their mouths to catch prey instead of a sticky tongue like other toads.
• They live much longer than many other types of toads.
• The bright orange/red on its underbelly signals danger to its predators.
• They are found in ponds, lakes, and streams with slow-moving water.

The scientific name of the Oriental fire-bellied toad is Bombina orientalis. It belongs to the Discoglossidae family and is in the class Amphibia. The word Amphibia comes from the longer word amphibian. Amphibian is a Greek word meaning double life or two worlds. An amphibian lives one part of its life in the water and the other on land. However, the fire-bellied toad spends most of its life in the water even as an adult.

The Oriental fire-bellied toad has large black eyes with pupils in the shape of a triangle. This toad has a bright green and black spotted pattern on its bump-covered back. Its underbelly is covered with splotches of bright red or orange and black.

These toads grow to be 1.5 to 2 inches long, about the length of a single golf tee. They weigh from 1 to 2 ounces, which is as heavy as two AA batteries. The giant fire-bellied toad is the largest species, measuring up to two-and-a-half inches long.

The bright reddish/orange splotches on this toad’s underbelly serve as defensive features. When this toad feels threatened it shows its underbelly to the predator by arching its back and raising up on its front legs. These bright colors send a signal of danger to predators. If a predator persists and tries to pick up the toad or grab it, this amphibian releases a milky poison from thousands of tiny pores in its skin. This usually causes the predator to drop the toad and move away. If the predator ever sees those warning colors again, it is not likely to approach the toad a second time.

European and Oriental fire-bellied toads are social and live in groups, called knots, that can number in the dozens depending on the size of the stream or pond. They are active during the day and are shy and try to stay out of sight. Of course, their bright colors make it hard for them to stay hidden.

These creatures live in Europe and Asia, in places like Germany, Hungary, Poland, northeastern China, Korea, Thailand, and southeastern Siberia. They need a moderate climate to survive and live in lakes, ponds, swamps, and slow-moving streams. When they’re out of the water, they move around on the leafy ground of nearby forests. In the spring and summertime these toads live mostly in the water, which is why they are sometimes called aquatic toads.

When the weather starts to turn cold in late September, they bury themselves in soft ground to hibernate through the winter. These toads can migrate a few hundred meters from water to find a place to hibernate. They come up out of the ground when the weather turns warm again in late April or early May.

The conservation status of the fire-bellied toad is Least Concern. Though their population is thought to be decreasing, there’s a large concentration of these toads in northeastern China and North Korea.

The European fire-bellied toads in Germany, Poland, Hungary and other nearby countries are also categorized as Least Concern.

When they are tadpoles, these creatures eat algae, fungus, and other tiny plant life. As adult, they eat snails, worms, and other insects. This change in diet makes them omnivores.

This toad has a few predators including hawks, owls, foxes, snakes, and large fish. Large birds like hawks and owls swoop down near the edge of a pond or lake to grab them. A fox or a snake may spot one that is further up on land and grab it. Large fish can pull this toad under water as it swims in a stream or pond.

These creatures can defend themselves against predators by letting the poison seep out of pores in its skin when attacked. The poison has a bitter taste that immediately makes a predator release the toad. But, of course, there are always exceptions. Grass snakes and other types of water snakes are able to capture and eat them with no reaction to the poison.

The fire-bellied toad has experienced some level of threat due to loss of habitat caused by logging activity, but it seems to be able to adapt to its changing environment.

Another threat is a decreasing population due to the international pet trade. Oriental fire-bellied toads are sometimes captured and sold as pets in North America and Europe. The brightly colored patterns on these toads is what makes them so desirable as pets.

Breeding season for these creatures begins in the middle of May. To attract the attention of female toads, a male floats on the surface of the water making a gentle clicking sound. Once a male and female mate, the female lays approximately 40 to 70 eggs in a pond, lake, or slow-moving stream. The eggs are jelly-like and cling to rocks or sticks near the surface of the water.

A female toad can have more than one group, or clutch, of eggs per breeding season. This may mean she lays over 200 eggs per spring. Once a female lays a clutch of eggs, she leaves them to hatch and care for themselves. The male tdoad is not involved at all in the care of the eggs or tadpoles.

The eggs hatch in just 3 to 6 days. The tiny tadpoles eat fungi and algae to nourish themselves as they grow. The tadpoles grow into fully formed toads in 45 days or less. At that point, they begin to eat worms, insects, and snails. Sometimes a young toad is called a toadlet.

The fire-bellied toad lives longer than many other types of toads. In the wild they usually live from 12 to 15 years. With proper care in captivity, these toads can live to be 20 years old or more!

These toads are vulnerable to skin infections due to bacteria in the water. In addition, they can suffer from a depressed immune system as a result of water pollution.

Fire-Bellied Toads in the Zoo

Visit the Oriental fire-bellied toad in the Lincoln Park Zoo. You can also find them on display at the Seneca Park Zoo, the Alexandria Zoo and the Peoria Zoo.

View all 24 animals that start with F

Where do fire-bellied toads lay eggs?

Fire-bellied toads lay eggs in ponds, swamps, lakes, and streams. The female lays the eggs on a rock, stick or log that is underwater, but still close to the surface. The sunlight helps the eggs to develop and hatch into healthy tadpoles.

What phylum does a fire-bellied toad belong to?

How do you feed a fire-bellied toad?

Fire-bellied toads in captivity are fed crickets, worms, and other nutrient-filled insects. A toad should be fed as many insects as it wants in a 15-minute period about three times a week. Sometimes the insects are dusted with special vitamin powder to ensure the toad is getting the right nourishment.

Yes. They release toxins through their skin if they feel threatened. This toxin, or poison, has the power to irritate skin or make a predator sick. A predator that takes in a large amount of toxin from a fire-bellied toad can become very ill.

No, these toads are not a good choice for a pet. They require special care and can cause skin irritation if they release their toxin on a person’s hands or arms. They are better left in their natural habitat or you can visit one in your local zoo!