Click through all of our Long-Eared Owl images in the gallery. 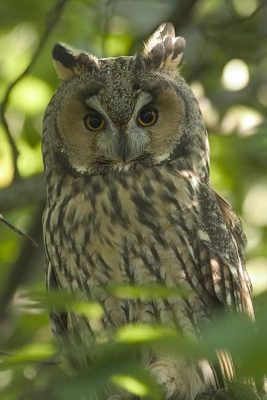 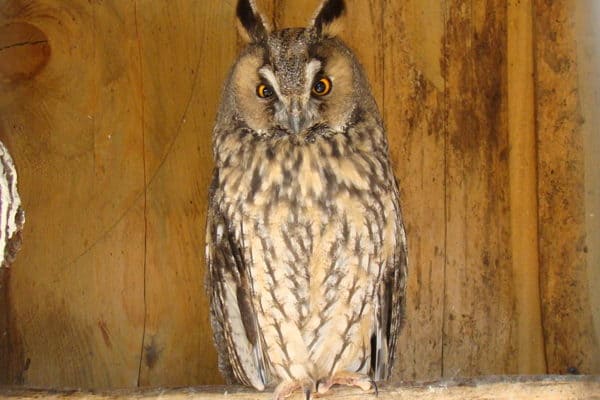 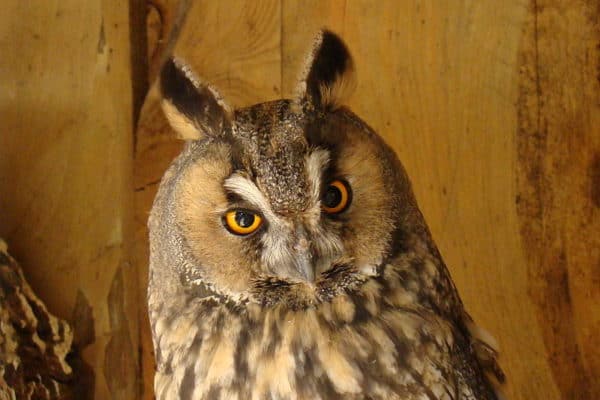 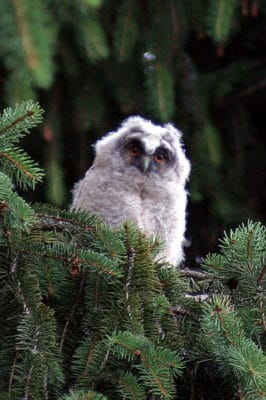 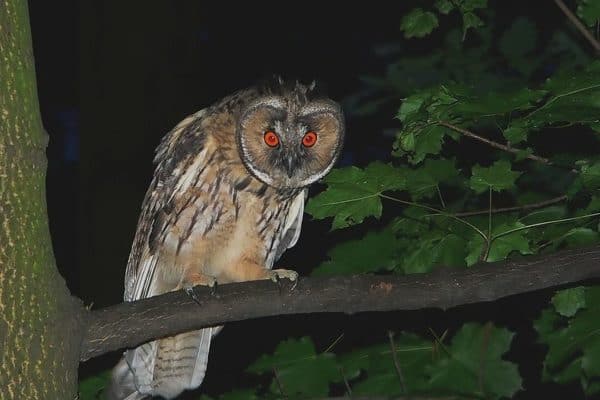 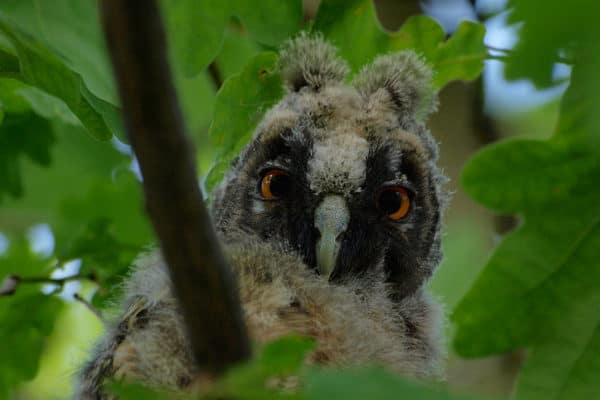 View all of the Long-Eared Owl images!

The long-eared owl makes its home in North America, Europe, parts of Asia as well as in northern and eastern parts of Africa, including Madagascar. It nests in forests where the trees grow close together. Long-eared owls hunt at night looking for mice, bats, and other small animals. The wingspan of these owls can measure up to 39 inches wide, and they can live to be almost 30 years old. The male and female long-eared owls differ in several ways, one of which is in the distinct sounds they make in their mating calls. Keep reading for additional facts about this fascinating animal.

• Making dense forests their home, these owls have babies in nests that are abandoned by other birds.
• They use their excellent sense of hearing to hunt for prey at night, often hunting in open country.
• Baby long-eared owls can’t fly until they’re 35 days old.

The long-eared owl, sometimes called the common or Northern long-eared owl, has a scientific name of Asio otus, which is Latin in origin. Its class is Aves, and it belongs to the Strigidae family.

The long-eared owl has a mixture of brown and gray feathers, which flow in a vertical design, with two ear tufts standing up on its head. But, despite the name, these ear tufts aren’t really the owl’s ears, they are simply tufts of black feathers. Its ears are located on the sides of its head.

A long-eared owl’s eyes are either orange or yellow, and it has a black beak. Its feet are covered with a thin layer of light-colored feathers.

This owl is categorized as medium-sized due to its slender body, which can range in length from 13 to 16 inches, which is slightly taller than a bowling pin. Normally, female long-eared owls are larger than males, weighing an average 10 ounces (the weight of two baseballs) to the male’s average 8.75 ounces (slightly less than a can of soup).

The wingspan of this owl can be as wide as 39 inches. So, if you set 18 golf tees on the ground end to end, you’d be looking at the approximate width of this owl’s wings when they’re spread. Its wings are so wide, in fact, that this owl has to cross them over one another on its back when perched on a branch. It’s no wonder they can fly as fast as 31 miles per hour!

Long-eared owls are quiet most of the year, except during mating season, when they make a lot of hooting sounds. Males make more than 200 sounds, which are primarily low-pitched, while a female’s call comes out as a much higher sound. A male’s sounds range from a short whine or whistle to a deep moaning sound. A call of this owl can sound like a squeak, a cat’s meow, a squeal and even a bark. Just like human speech, every owl call has its own meaning. What do you think owls like to talk about?

The slender body of this owl helps to protect it against predators. While sitting in a tree, a long-eared owl pulls in its feathers so they’re flat against its body and stretches out to its full length. In this position and with its dark coloration, it can be mistaken for a large tree branch by predators.

Owls are known to be solitary animals. But, when they do gather together, the group is called a parliament. These birds are shy and like to stay hidden if at all possible.

Long-eared owls live in areas throughout the world including North America, Europe, parts of Asia as well as in northern and eastern parts of Africa. Additionally, some subspecies of these owls live in Madagascar. The long-eared owl needs a temperate climate to survive.

Specifically, these owls live in large forests, smaller groves of trees, thickets around wetlands and marshes, and in grasslands. They prefer to nest in areas where the trees are packed closely together to give them protection from predators. But, when these owls hunt, they fly around open grassy areas in search of prey.

Some long-eared owls migrate south for the cold weather season. For instance, owls that live in the southern part of Canada or the northern United States fly south as far as Mexico before the cold weather arrives in the autumn. Scientists know these facts because they’ve tracked populations of these owls and their movements throughout the years.

The official conservation status of the long-eared owl is Least Concern. While its population has been affected by loss of habitat due to land clearing and construction, it remains stable. Since these owls are so good at staying hidden, scientists don’t know for sure how many there are in the world. However, it’s been estimated there are around 50,000 of these owls.

The long-eared owl has excellent hearing and vision, and it uses these senses to hunt in the dark. They fly low to the ground and listen for rodent activity so they can quickly capture any small prey they find. The tips of their wings are shaped like the teeth of a comb which helps them to move them without making any noise. They are true birds of prey.

Long-eared owls hunt for mice, voles, shrews, small birds, small snakes, bats, and sometimes insects. They are carnivores like most other owls and swallow their prey whole. It’s unclear how these owls take in water, but they may get enough from the fluids inside the animals they eat.

Several of the predators of the long-eared owl are larger owls, including the great horned owl, barred owls, and eagle owls. Other predators include red-tailed hawks, golden eagles, northern goshawks, and peregrine falcons.

Fully-grown long-eared owls can be chased into trees and attacked by the predators mentioned above. They’re smaller and thinner than many of their predators, making it easier to subdue them.

Baby long-eared owls are sometimes threatened while they are still in the nest. A raccoon or bull snake may approach the nest in an effort to grab a baby owl, and the mother and father owl will flap their wings at a predator or fly down to snap at it in an effort to protect their owl babies. In some cases, other owls with nests nearby will join in the fight to drive a predator away from the area. When a predator sees it’s outnumbered, it is likely to give up and go away.

The mating season of this owl goes from February to July. The male long-eared owl flies over the nesting area and makes a variety of calls and sounds to attract a female. It may also perform some interesting flying routines to grab the attention from other males looking for a mate. These owls are monogamous and have babies once per year. If you ever hear an owl’s call coming from one area and a second owl’s call coming from another direction, it’s likely they are a monogamous male and female pair that’s communicating with one another.

One of the most interesting facts about long-eared owls is they don’t build their own nests. Instead, they occupy nests abandoned by owls and other birds. Sometimes they settle down in an old nest abandoned by squirrels, which is called a drey.

Females can lay from 2 to 10 eggs in the nest, but the group, also known as a clutch, usually contains 5 or 6 eggs. Instead of laying all of her eggs at once, a female lays a new egg every two days or so. Each egg is a little over 1 inch in length and is bright white with a glossy shell. The female owl sits on the eggs non-stop during the day while taking a little time away to hunt at night.

The eggs hatch in 25 to 30 days. A newly hatched baby owl is covered with white feathers, called down, and its eyes are closed. This is when they are most vulnerable to predators. The mother owl is the main caretaker for about two weeks, and then the father owl takes over. He brings food to the mother and her babies also known as chicks or owlets. The chicks eat small things like worms and insects, then eat larger prey as they get bigger.

When the chicks are 21 days old, they leave the nest but are not able to fly. At this stage, they are called branchlings because they perch on branches around the nest while still getting food from the father owl. When they reach 35 days old, the babies are able to fly for short distances. They practice hunting and capturing small prey to prepare to care for themselves. At around 11 weeks, the baby owls are able to live independently.

The lifespan of a long-eared owl can range from 10 to 30 years old depending on its strength and health, but the average lifespan is 11 years old. The oldest long-eared owl made it to 27 years, 9 months old in the wild.

Owls can develop some of the same respiratory ailments as many other types of birds. Trichomoniasis and aspergillosis are two examples.

How many eggs does a long-eared owl lay?

How fast can a long-eared owl fly?

A long-eared owl can fly as fast as 31 mph. This owl has to swoop down in the dark to catch a mouse, shrew, snake, or other prey so it needs to be quick!

Where are long-eared owls found?

These owls are found on many continents including North America, Europe, parts of Asia and parts of Africa. In addition, there are some in Madagascar. They live in temperate climates found in forests, marshlands, grasslands, and small groves.

Why is the long-eared owl endangered?

The long-eared owl isn’t endangered. It’s listed as Least Concern by the International Union for Conservation of Nature (IUCN), Red List of Threatened Species. Their population is holding steady with some level of threat due to habitat destruction. They are sometimes killed by hunters, but this is uncommon. Once again, this is a bird that remains hidden from humans and other animals most of the time.

Both male and female long-eared owls have a variety of calls and sounds they make. They can squeak, squeal, whine, and whistle. And, of course, they can hoot! Some people compare a male long-eared owl’s call to a person putting their lips to the top of a glass bottle and blowing down into it. Now, that’s a call that’s hard to miss!

Long-Eared Owls are Carnivores, meaning they eat other animals.

What Kingdom do Long-Eared Owls belong to?

What phylum to Long-Eared Owls belong to?

What phylum to Long-Eared Owls belong to?

What family do Long-Eared Owls belong to?

What order do Long-Eared Owls belong to?

What genus do Long-Eared Owls belong to?

What type of covering do Long-Eared Owls have?

Long-Eared Owls are covered in Feathers.

What is the main prey for Long-Eared Owls?

What are some predators of Long-Eared Owls?

Predators of Long-Eared Owls include eagles, hawks, and foxes.

What are some distinguishing features of Long-Eared Owls?

What is an interesting fact about Long-Eared Owls?

What is the scientific name for the Long-Eared Owl?

The scientific name for the Long-Eared Owl is Casuarius.

What is the lifespan of a Long-Eared Owl?

What is the lifespan of a Long-Eared Owl?

What is the Long-Eared Owl's wingspan?