A marmot spends 80% of its life below ground

Click through all of our Marmot images in the gallery. 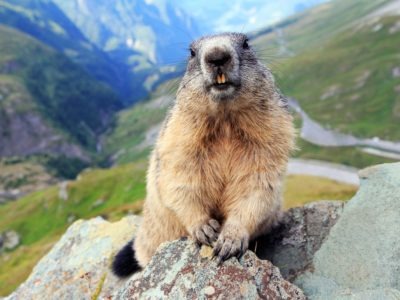 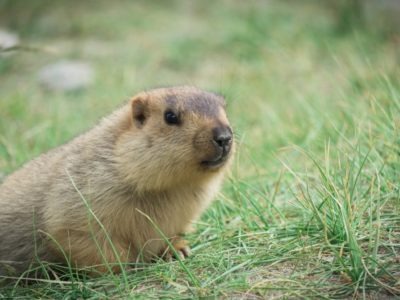 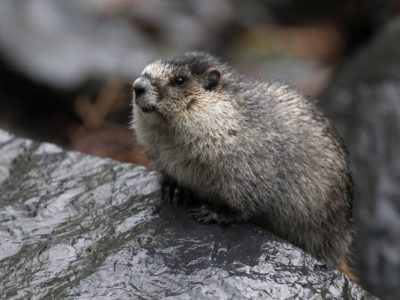 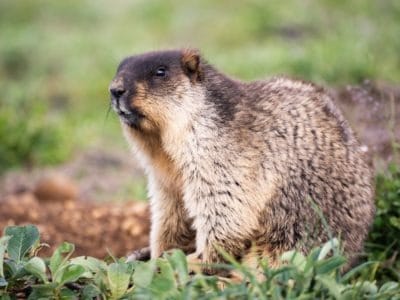 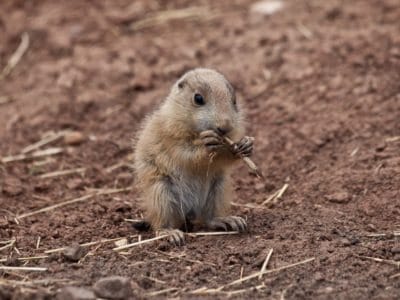 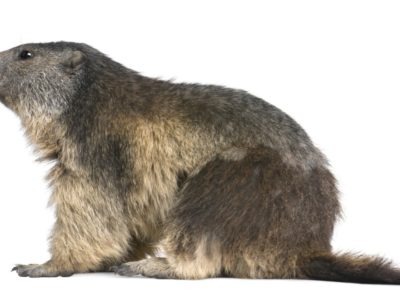 View all of the Marmot images!

A marmot is a rodent of medium size with brown fur on its head and back as well as yellow fur on its belly. This animal is a herbivore eating nuts, leaves, seeds, flowers, grass, and grains. They live in Europe, Asia, and North America. Groups of marmots are called colonies. Marmots are animals that can live from 13 to 15 years in the wild.

The yellow-bellied marmot’s scientific name is Marmota flaviventris. The word Marmota is Latin for mountain mouse and the word flaviventris translates to yellow-bellied. It goes by several other names including whistle pig, groundhog, ground squirrel, and rock chuck.

This animal belongs to the Sciuridae family and the class Mammalia.
There are 15 species. Some of them include:

Yellow-bellied marmots have short brown fur on their back and head along with yellow fur on their bellies. They have small ears, a black nose, and claws strong enough to dig deep burrows. In terms of size, these rodents measure 18.5 inches to 27.5 inches in length. Its bushy tail can measure up to 8 inches long. This rodent spins and lifts its tail as it runs. The weight range for this animal goes from 3.5lbs to 11.5lbs. Thirteen golf tees lined up end to end on the ground would equal the length of a 27-inch long animal. Alternatively, an 11-pound marmot is equal in weight to a gallon can of paint.

The largest species is the Olympic marmot. This animal can weigh up to 18 pounds. Though this animal isn’t a pet, it’s almost as heavy as an adult dachshund!

One of the defensive features of this animal is its voice. One marmot ‘stands guard’ over a colony while they look for food above ground. If it spots a predator, it makes a loud whistling sound. When other animals hear this, they run into their burrows and tunnels to escape danger. They make other sounds such as chattering and clicking. They even have a sound that is similar to a scream. All of these sounds are a unique form of communication between these ground squirrels.

Marmots are animals that make their homes in small spaces or in areas that are hard to access. This could be a crevice in a rock or a burrow beneath a collection of boulders. Many of their predators can’t gain access to these burrows and tunnels. This is another way they can escape an enemy or stay out of sight while scanning the area.

These animals are active during the day. Many of them lay on rocks sunning themselves in the morning, then look for food. Most of them are social animals and live in colonies with 10 to 20 other animals. However, some species live by themselves or with just one other marmot. This is a shy animal with a lot of predators. It prefers to stay underground and out of sight most of the time.

The Himalayan marmot lives in mountains in Nepal as well as in India and Tibet. Alpine marmots live in the Alps, Carpathians, Pyrenees, and other mountain ranges in Europe. The long-tailed marmot lives in Central Asia in the Tien Shen mountains.

The yellow-bellied marmot lives in a climate that’s dry and warm. Alternatively, the Alpine marmot that lives in the Alps is able to live in a very cold climate. In fact, this animal hibernates about 9 months each year. Their strong claws allow them to dig in the partially frozen ground to expand their burrow system in preparation for hibernation.

Hibernation is how these animals deal with the freezing winter temperatures of their habitat. They eat a lot during the summer to store fat in order to survive hibernation which begins in September and ends in May. During hibernation, the animals huddle together in a burrow for warmth. Interestingly, a marmot takes just 2 to 3 breaths per minute while in full hibernation mode.

Males are territorial. They mark their territory with scent to warn other animals away from the area. Marmots from the same colony get along fairly well. But, if an animal from another colony enters a strange burrow, there can be fights between the males. They chase and fiercely bite one another over territory.

This ground squirrel has several predators including coyotes, foxes, eagles, and badgers. Sometimes coyotes and foxes look for their burrows so they can capture these animals when they come out to look for food. Eagles can swoop down with speed and focus to capture them venturing outside of their tunnels to eat.

Babies are vulnerable to these predators as well. They must come out of the burrow to learn how to find plants, leaves, and other food.

What do marmots eat?

These animals are herbivores eating flowers, nuts, grains, and plants. They eat what’s most plentiful in their habitat during the spring and summer.

Alpine marmots can eat plants in their environment that would be poisonous to other mammals. This is true for other sorts of rodents as well.

These rodents weigh more in the fall season than they do in the spring. This is because they eat a lot over the summer to store fat they can live on while hibernating over 9 months. An animal may gain 4 or 5 pounds in preparation for hibernation. When it comes out in the spring, it weighs less having used up the stored fat.

Fortunately, the yellow-bellied marmot along with many other species of this animal doesn’t face any major threats. Sometimes Alpine marmots are hunted for sport as well as for food. There’s also a belief that their fat also known as mankei fat is a cure for arthritis. So, these rodents are sometimes captured for this purpose.

The conservation status of the yellow-bellied marmot along with most others is Least Concern with a stable population.

The breeding season of the yellow-bellied marmot takes place from May to June. These animals breed just once per year. Olympic marmots breed every other year.

The gestation period of a female marmot is approximately 30 days. They can have a litter of 3 to 8 babies also known as pups. But, on average, they give live birth to 4 pups. The pups are born with their eyes closed and without any fur. Each newborn pup weighs just one ounce.

The mother nurses her pups for about three weeks, then begins to feed them grasses and plants. The pups begin to venture out of the burrow to explore and look for food at around 4 weeks old. They are fully weaned at 7 weeks of age. Though the female continues to take some care of the pups, they are growing quickly and becoming more self-sufficient. Marmot pups are completely independent at 7 weeks old, but they may remain a member of the colony. In some cases, the parents of 7-week-old pups will chase them away from the colony forcing them to find a new system of burrows to live in.

Marmot pups are sexually mature at about 2 years old. The lifespan of a marmot is 13-15 years. These animals are vulnerable to a variety of intestinal parasites.

Fortunately, there are many national parks in the United States where marmots live in abundance. There’s Rocky Mountain National Park in Colorado, Sequoia & Kings Canyon in California, Olympic National Park in Washington State, and Denali National Park and Reserve in Alaska just to name a few!

What is a marmot?

A marmot is a rodent of medium size that lives in colder, dry climates. Its furry body and cute face may make it seem like the perfect pet. But a marmot is a wild animal that prefers to live with other marmots in a colony.

Is a marmot a groundhog?

A groundhog is a type of marmot. There are 15 species of marmot. So, when you think about it, you could call February 2nd Groundhog Day or Marmot Day!

How do you pronounce marmot?

Learning the proper pronunciation of marmot is easy when you remember it sounds like you’re saying marmet.

Are marmots carnivores, herbivores, or omnivores?

Marmots are herbivores. They eat plants, seeds, flowers, leaves, nuts, and grains. Some biologists call them folivores and granivores as well. A folivore eats a lot of leaves and a granivore eats the seeds of plants.

Where do marmots live?

Marmots live in Europe, Asia, and North America. They live in the western part of the United States in states such as Colorado, Utah, California, Washington State, and Alaska.

They live in central and southern Europe in various mountain ranges. They also live in China and areas of north-central Asia including Siberia.

A marmot’s appearance is similar to a large squirrel or even a large version of a prairie dog. They share the same small ears, black nose, and prominent teeth. They can sit up on their back end and look out over their habitat. Marmots are categorized as ground squirrels and they are close relatives of prairie dogs.

Is a marmot dangerous?

Marmots are not dangerous. Of course, any wild animal or even a pet can become aggressive when it feels its safety is threatened. But marmots are most likely to run for cover in their burrow at the first sign of a threat or when they hear that unforgettable whistling.

What Kingdom do Marmots belong to?

Marmots belong to the Kingdom Animalia.

How fast is a Marmot?

A Marmot can travel at speeds of up to 3 miles per hour.