Comparing a Fruit Bat and a Vampire Bat

Key Differences Between a Fruit Bat and a Vampire Bat

The most obvious differences between fruit bats and vampire bats lie in their location and diet. Fruit bats are mostly found in Central America, South America, and Australia and they have a strictly herbivorous diet. Vampire bats, on the other hand, are located strictly in South America and are predominantly carnivores.

There are some other differences between fruit bats and vampire bats and we shall be getting into explicit details as we go on.

Vampire bats, on the other hand, are largely miniature with weight ranging from 0.7oz-2oz and a  wingspan of about 5.9 to 7.9 inches on average.

Overall, fruit bats are larger and weigh more than vampire bats without question.

Since both animals are bats, one might be tempted to assume that they look alike. However, taking a look at both animals, they are obviously very different in terms of appearance. Besides previously-discussed differences in size, there are other physical differences and individual peculiarities.

Notwithstanding their position as the only mammals capable of full flight, fruit bats boast a thick, mammalian long coat of fur, big eyes, two upper and lower canine teeth, a canine-like face, and a large rostrum. They also typically have different types of identifying characteristics like the large hammer-looking snout on the hammer-headed bat.

There is not so much to be said about vampire bats besides their small size, relatively long wings, and a thumb claw at the front that helps them maintain a grip while climbing up and around their hosts. They also have dark brown to grey furry bodies and strong limbs for crawling around.

So, while they both have the suffix “bat” in common, fruit bats and vampire bats differ a lot in appearance.

Fruit bats and vampire bats have similar habitats but they differ slightly in terms of location as we are about to see.

Fruit bats are commonly found in the Eastern Mediterranean and Australia, especially ones from the Pteropodidae family, while some species are known to spread into Central and South America. Experts say over half of them roost in trees while the others take the rocks, bushes, caves, and derelict buildings.

Vampire bats, on the other hand, are strictly located in South and Central America. They live in tropical and sub-tropical regions and like other bats, they like to live in trees, caves, mines, and abandoned buildings.

Fruit bats and vampire bats also differ in their behavior and temperament. Fruit bats are very social animals and they often gather in groups of up to 200,000 individuals. The size of the social groups depends largely on food supply, meaning areas with a large food supply will have a larger congregation of bats. They are also nocturnal like most other bats and only a few species actually feed during the day.

Another curious aspect of fruit bats’ behavior is their tendency to rely on their sense of smell for perception, rather than echolocation like other bats.

Vampire bats often sleep upside in darkness during the day and they would often move to hunt once the moon shows up. They also have strong arms and legs which enables them to move gallantly on the ground to complement their flying abilities. Also, unlike fruit bats, vampire bats are more likely to move solo, although they sometimes come together in groups of 100 for a common hunting goal.

One of the major differences between a fruit bat and a vampire bat is their diet. While fruit bats are largely herbivorous, vampire bats, like the name suggests, are carnivorous.

Fruit bats feed on flowering plants, and they often forage for an assorted collection of nectar, fruits, and pollen. They would typically squeeze out the juice from the fruits, leaving other parts.

Fruit bats are generally eaten by lizards, select snake species, birds of prey as well as humans. They also face threats to their habitats, mostly as a result of poisoning or shooting by farmers to deter them from eating their crops.

Similarly, vampire bats are preyed upon by birds of prey and snakes. Humans are, perhaps, their biggest threats as they are known to decimate them through poisons and vampiricides that can eliminate hundreds at once. 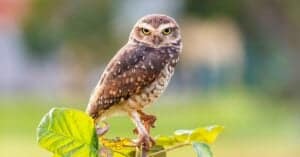 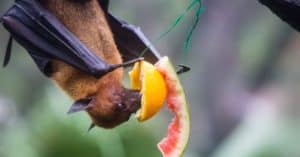