Blue grosbeak parents take off the head, legs and wings of an insect before feeding it to their baby. 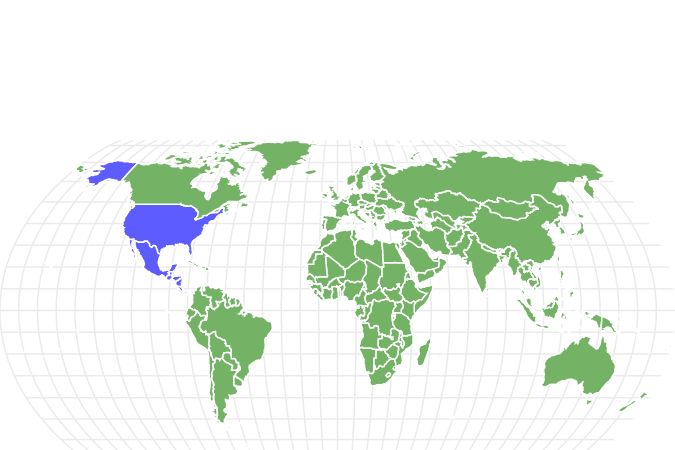 View all of our Blue grosbeak pictures in the gallery.

View all of the Blue grosbeak images!

Though the blue grosbeak may be elusive in some areas, it is out there. People hear its song without seeing it, though the sight of the brilliantly blue male is a pleasure.

It is one of the largest of the grosbeaks, which are birds with heavy beaks used to crack seeds. Grosbeaks aren’t really a scientific group, as they don’t necessarily have a common ancestor and may only be distantly related to each other. Happily, the blue grosbeak is not endangered, and its population and breeding range may even be expanding.

Where To Find the Blue Grosbeak

The range of the blue grosbeak covers much of North America, especially south of the 40th parallel on the map, though their range is moving northward. They’re found in Mexico, Central America, and the West Indies and have been spotted as far south as Ecuador and as far north as Idaho.

Despite its plumage, the male blue grosbeak is surprisingly hard to find in many backyards, for it and its mate prefer to be hidden in shrubbery and snarls of vines and briars. The best way to get a glimpse of a blue grosbeak is to learn the song of the male and try and follow it. The birds also give a buzzing sound and a “chink” sound when they’re agitated. In their summer range, blue grosbeaks can be seen gleaning seeds from fields.

The blue grosbeak nest is cup-shaped and found in shrubbery or tangled vines near an open area or even a road. The female builds the nest about 3.3 to 10 feet off the ground using twigs, strips of bark, bits of newspaper, dead lives, roots, rags, and even snakeskin. She then lines it with small roots, fine grass, and hair. The inside of the nest is about 2 inches deep and 2 to 3 inches wide. The bird usually has two broods a year, and when the female starts to build the second nest, the male takes care of the babies from the first brood.

The blue grosbeak’s scientific name is Passerina caerulea. Passerina means “like a sparrow” in Latin and caerulea is Latin for shades of blue. There are seven subspecies of blue grosbeak. They are:

The male blue grosbeak is fairly easy to identify, for the only bird that has that much blue in its plumage and a heavy, cone-shaped bill is the smaller indigo bunting. Maps show that their ranges overlap in places. Yet, the grosbeak’s blue coloration is an optical illusion caused by the way light plays over its feathers, and the human eye can’t even see all of its amazing colors.

The male is 5.5 and 7.5 inches long has reddish-brown bars on its wings, and its back is streaked. The bill is conical and the eyes are brown. The female is all over brown with a bit of blue in her feathers if seen at the right angle. Males and females are about the same size.

The blue grosbeak has rounded wings and a fan-shaped tail that is midnight blue on the top and bluish-gray beneath. Its legs are black. The bird can sometimes be told by its flight, which is fast, with fast wingbeats interspersed with the bird tucking its wings against its body now and then.

One of the reasons these birds are so hard to find is that it’s very shy around humans and will fly away if it thinks it’s being watched. However, in the summer a gross of them can be seen hopping or flying over the ground to find leftover seeds in cleared fields, often with other types of birds. They also flick their tails and move sideways along tree branches, but no one is sure why they do this.

The blue grosbeak breeds from early spring to late summer in the northern part of its range. A map of the bird’s migration pattern shows that it nests in the southern United States and northern Mexico and spends its winters on the Mexican coast, the Caribbean, and northern South America. There are some populations in Central Mexico that don’t migrate but stay where they are year-round.

The bird’s diet is made up of insects such as cicadas, crickets, grasshoppers, and praying mantises, and they also eat caterpillars, beetles, snails, spiders, and other invertebrates. They also eat seeds, especially those left over in fields and pastures. Chocolate, onions, garlic, apple seeds, and the pits of peaches and apricots are toxic to them, and old bread and table scraps are not healthy.

These birds seem to have benefited from human activity because it eats seeds that are left from agricultural activity and nests in places where tall trees have been removed by logging. Still, blue grosbeaks are caught and eaten by cats, raptors, and other predators and are often parasitized by the cowbird.

The cowbird lays its eggs in the nests of other birds and leaves its baby to be raised by foster parents. Often, the cowbird baby is so much larger and demands so much more attention from the parents that the biological chicks languish.

The blue grosbeak also carries feather mites, and some scientists worry that they may spread diseases as their range expands. Fortunately, there’s no indication that these birds are disease vectors.

What eats the blue grosbeak?

These birds are eaten by the usual predators of songbirds. These include feral and pet cats, snakes, and birds of prey such as hawks and owls.

These birds start building their nests as early as the middle of April in their nesting range, though most are started in May. The males arrive before the females and start singing to attract them. Once she chooses a mate, the female will build the nest, then lay from three to five pale blue, freckled eggs. She incubates the eggs for about 11 to 12 days, and the male feeds her during that time.

The babies start fledging 9 to 10 days after they hatch, and both parents feed them. By late summer, the parents and chicks head to the open areas to find seeds, insects, and small invertebrates to eat before they begin their annual migration.

These birds live about five years in the wild, though the oldest bird was about seven years old.

Scientists believe that the worldwide blue grosbeak population is about 24 million birds. Its population is stable and may be increasing in some areas, and its conservation status is least concern.

Does the blue grosbeak migrate?

The blue grosbeak does migrate.

How many eggs does the blue grosbeak lay?

The blue grosbeak lays from three to five eggs per clutch.

How fast does the blue grosbeak fly?

Base on how fast its cousin the cardinal can fly, the blue grosbeak can probably reach speeds of 30 miles per hour.

What is the blue grosbeak’s wingspan?

The blue grosbeak’s wingspan is between 10 and ll.5 inches

When do blue grosbeak chicks leave the nest?

Where do blue grosbeaks live?

How do you attract grosbeaks?

Grosbeaks are wary of visiting suburban backyards but may visit a yard that mimics its favorite habitat of a few shrubs and small trees around an open space.

How do I attract grosbeaks to my yard?

Since blue grosbeaks are opportunistic feeders, a bird feeder in the right area will interest them. They are attracted to cracked corn, black oil sunflower seeds, white millet, and canary seeds.

Are grosbeaks related to cardinals?

Blue grosbeaks are related to cardinals. They are both members of the Cardinalidae family.

Male blue grosbeaks have a lovely, brief warble that’s clearer and sweeter than the song of the indigo bunting. These songs grow more complex when the males sense that the females are fertile. The birds also give a metallic chink sound and a low buzz.

How big is a blue grosbeak?