Their eyestalks, which are sometimes horned, can swivel 360 degrees

Click through all of our Ghost Crab images in the gallery. 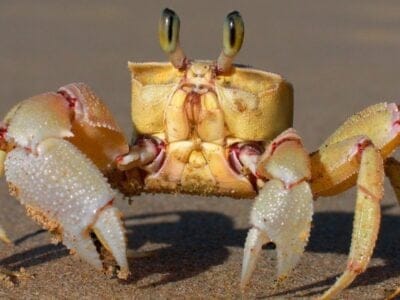 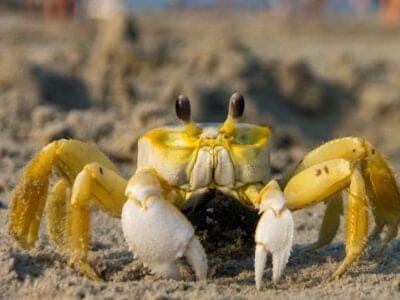 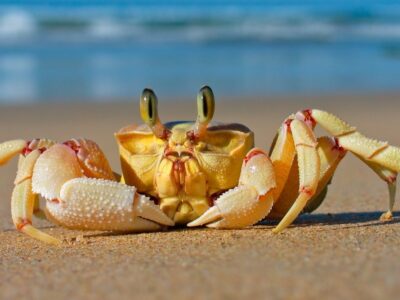 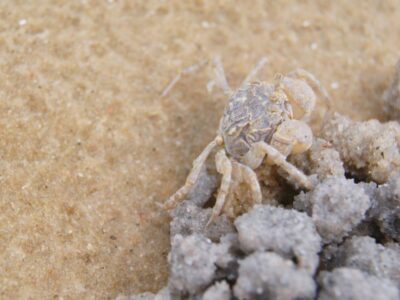 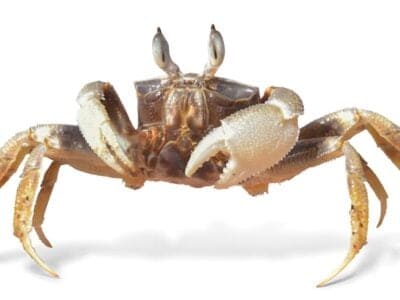 View all of the Ghost Crab images!

Ghost crabs are one of the most populous crab species in the world and are found on beaches from Oman to Polynesia to Australia to Florida to Egypt and Greece.

They can be told from their boxy shape, their sometimes horned eyestalks, and the uneven size of their claws. They can move surprisingly quickly, and the fewer legs they use the faster they are. Though they use eight of their 10 legs to walk normally, at their fastest only the first and second pairs of their walking legs are in play.

Ghost crabs are members of the subfamily Ocypodinae, which is found in the Ocypodidae family. Ocypode comes from Greek and means “swift-footed,” which describes the surprisingly fast way these crabs can scuttle over the sand. There are two genera in the subfamily, Ocypode, and Hoplocypode. Between these two genera, there are 21 species, though there’s only one species in Hoplocypode, H. occidentalis.

Besides Hoplocypode occidentalis, the species of these crab are:

These crabs have a boxy little body, and most species are pale with the exception of species such as O. gaudichaudii, the painted ghost crab. Their name comes not just from their general pallor, but from the fact that they hunt at night. Two characteristics that identify ghost crabs are that both the males and the females have claws of different sizes. This differentiates them from their cousins the fiddler crabs, where unequal size claws are only found on the males. The claws of most ghost crabs also have ridges that allow the animal to produce sounds.

Ghost crabs or sand crabs also have large and long eyestalks. In some of the Ocypode species, the eyestalks are horned or have stiles. The horns help biologists identify the species. They have huge corneas that are found on the eyestalks’ bottom half, and their walking legs are longer than the claws This allows them to move quickly and easily over the sandy beaches where they live.

Ghost crabs are found near warmer waters all over the world, like those off the coast of Florida or India. These semiterrestrial crabs dig burrows in sand and mud found in that zone between the high and low tide on beaches on the oceans or estuaries.

There are 21 species of sand crab, and though their habitat has been disrupted by human activity, their population is fairly healthy. Most sand crabs are found in the Indo-Pacific region, while a handful of species are found in the Mediterranean, the Pacific coast of North America, and on storefronts along the Atlantic Ocean from Massachusetts down to Florida and further south to Brazil.

Despite their small size, ghost crabs don’t have a great many predators. Besides the ability to change color, other adaptations that evolved for both hunting and avoiding predation are their speed and their nocturnal lifestyle. Still, ghost crabs are taken by shorebirds and raccoons. The crabs themselves prey on leatherback turtle eggs and hatchlings, which is problematic since the leatherback turtle is endangered. They also eat smaller crabs, other marine arthropods, and insects. Besides hunting for food, ghost crabs are scavengers and cache food in their burrows.

Ghost crabs can mate all year, though there are some species where the female-only ovulates in early spring and again in summer. They are unlike other crabs of their Infraorder in that the female can mate when her shell has hardened after a molt. This is one of the adaptations the crab made when it became semiterrestrial.

Males posture and make sounds to both attract females and challenge other males. Usually, the male crabs don’t make contact, but if one doesn’t submit, the stronger one shoves him out of the way.

Fertilization is internal and mating usually happens near the male’s burrow. The sperm comes in a fluid that hardens and forms a plug in the female to make sure her eggs are not fertilized by a rival crab. The female can store sperm for a while, but when the eggs are fertilized they emerge and stick to her abdomen. Since the eggs look like berries, a female carrying her eggs this way is referred to as berried. The female makes sure the eggs are kept hydrated and may sometimes swim upside down for this purpose.

When the crab larvae hatch, the female shakes them off into the water. They are so tiny at this stage that they become part of the zooplankton and are swept along on the ocean currents.

The baby ghost crab has five molts before it reaches the megalopa stage. It stays in that stage for a little over a month. If it survives to molt one more time, it leaves the sea for the land. Ghost crabs are ready to mate when they are about a year old and have a lifespan of about three years.

Ghost Crab in Fishing and Cooking

Though ghost crabs are edible, they are considered too small in size to be good eating.

The ghost crab population is healthy as of 2021, though it has decreased due to human activity, climate change and pollution.

View all 81 animals that start with G

Where are ghost crabs found?

Ghost crabs are found on tropical and temperate beaches of the Atlantic, Pacific and Indian Oceans.

What do ghost crabs eat?

Ghost crabs go hunting for smaller crabs, insects, carrion, clams and other types of mollusks and the eggs and newly hatched babies of sea turtles.

Where do ghost crabs live?

Ghost crabs live in burrows they dig in the sand or the mud on the beach in places as diverse as the coast of Florida, Sri Lanka or Western Australia. They stay in the burrows during the day and hibernate in them during the cold months.

Ghost crabs are not endangered.

Why are they called ghost crabs?

Ghost crabs are given that name because many species are pale, and they come out at night.

Can ghost crabs hurt you?

Ghost crabs can’t really hurt you, but their claws can deliver a sharp pinch.

The small size of ghost crabs does not make them good eating, but they are edible.

Can you keep a ghost crab as a pet?

Keeping a ghost crab as a pet would be challenging because the animal needs to burrow and must keep its gills wet. It’s best to leave them in the wild.

Can you eat ghost crabs in Hawaii?

As ghost crabs are not under protection in Hawaii, it may be possible to eat them if they can be caught. However, they do not have enough meat to make catching them worthwhile for most people.