Feeds on aquatic insects and water-spiders! Click through all of our Moorhen images in the gallery. 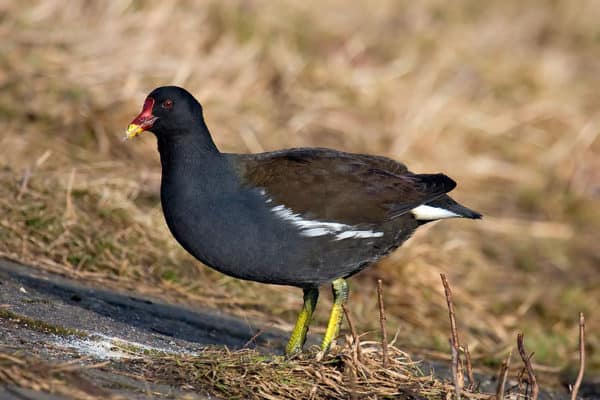 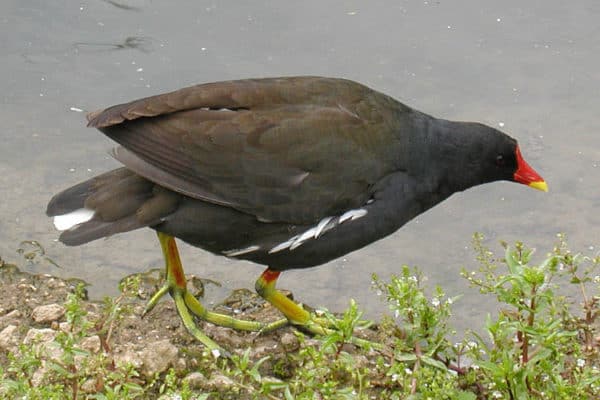 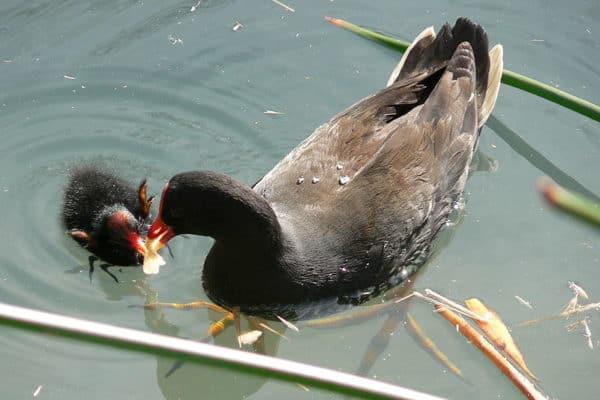 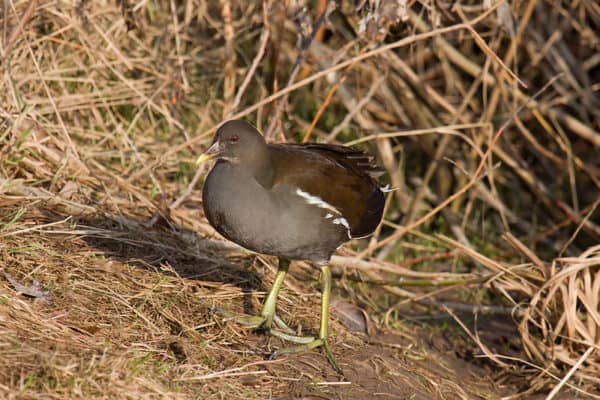 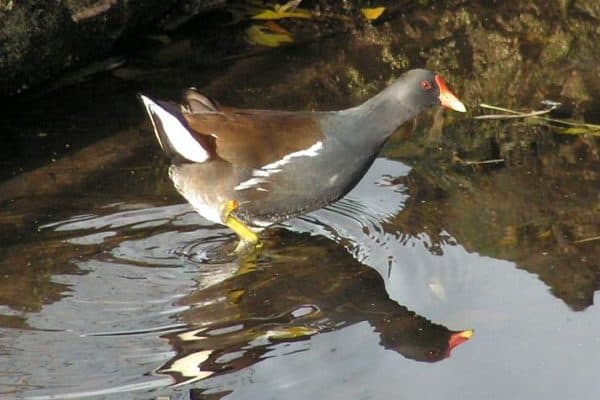 View all of the Moorhen images!

Moorhens can walk on top of water plants in ponds and lakes.

The common moorhen, also called the common gallinule, are birds that are found around the world, just about every place except for the polar regions and tropical jungles. These birds are black with distinctive yellow legs and a red beak with a shield that extends from their beaks up between their eyes and onto their foreheads. Unlike most water birds, moorhens don’t have webbed feet to help them swim. They will hiss if they feel threatened, but otherwise have a distinctive, gargly-sounding call they use to communicate with one another. Moorhens are members of the rail family, which includes many different species of marsh birds.

• Moorhens are birds that often nest in places that people frequent, such as parks.

• Juvenile moorhens don’t have the bright red shields on their faces.

• Moorhens can fly, but they aren’t very good at it and will only go short distances at any one time.

• Moorhens will eat other birds’ eggs if they can get to them.

The scientific name of the common moorhen is Gallinula chloropus. This name comes from the Latin word Gallinula, meaning a small chicken or hen, and the Greek word chloropus, which means green or yellow (khloros) foot (pous).

Multiple moorhen subspecies exist. Because they can be hard to identify based on the often-subtle physical differences, they are generally described by where they can be found.

The moorhen is mainly charcoal gray to black bird, but its wing feathers tend to have a brownish appearance to them. Along the rear edges of each wing is a strip of white, and it may have small white patches towards its rear as well. The adult birds have a bright red beak that extends upward between its eyes to create a shield. The point of the beak is yellow. Its legs are mostly bright yellow, and it has long, pointed toes with no webbing.

Moorhens live in groups, called flocks, most of the time. While these flocks can be large, moorhens often live in small groups of just a few birds. During the breeding season, they live around others of their kind but will separate somewhat from the others to claim a nesting territory.

Although they can be easy to spot when they are swimming, moorhens tend to be rather shy and will avoid people whenever they can. They are not aggressive except during breeding season, and then they will squabble with one another over nests as well as fiercely protecting their babies. They avoid contact with people whenever possible.

Moorhens can be found in most parts of the world, with the exception of jungles and the polar regions. They must have water, so they are only found in areas with enough water for the moorhens to survive. Usually, they need water that is deep enough for them to swim in, which also provides them with a place to nest and a way to escape their enemies.

In colder regions, moorhens will migrate to more temperate areas before breeding season. They can typically be found either swimming boldly on areas of open water or hiding in the weeds at the edge of ponds and creeks. They build their nests along the edges of the water, in dense vegetation that offers them good shelter.

Moorhens are omnivorous and eat a range of plant and animal matter. They eat many different small aquatic creatures, such as snails, small frogs, and fish, as well as land animals including rodents and lizards. They also eat insects and worms and have been known to eat the eggs of other birds. In addition, moorhens eat many of the plants that grow in or near the water, including fruit, berries, and seeds.

The moorhen faces many environmental challenges brought about by humans, including pollution and loss of habitat. Despite this, the common moorhen has proven to be highly adaptable and continues to thrive in many different environments, even parks and other locations frequented by humans. This bird is listed as being of least concern by the International Union for the Conservation of Nature (IUCN), which means that they exist in adequate numbers to sustain their population and face no significant environmental threats.

Not all species of moorhens are thriving, however. The status of the Hawaiian moorhen is uncertain due to its being preyed upon by the mongoose. Another species of concern is the Mariana moorhen. It is listed as endangered by the IUCN as well as other conservation organizations, due to loss of habitat. The Indo-Pacific moorhen is also considered endangered, most likely because the local people hunt this bird for food.

In most places, the moorhen is a popular prey item for a variety of predators. Some of the animals that prey on moorhens are foxes, coyotes, raccoons, dingos, and dogs.

In spring, anywhere from mid-March to mid-May, depending on the climate, moorhens begin to breed. At this time a male moorhen will swim towards the female with his beak dipped into the water. If she accepts him, they will go on to nibble each other’s feathers before working together to build a large nest in a hidden location in the weeds or brush. They will both defend the nest fiercely from any threats, including other birds who might want to steal their spot.

The female usually lays seven or eight eggs, and the male and female take turns incubating the eggs until they hatch, which takes about three weeks. When the babies hatch, both parents share the task of caring for them, taking turns feeding and protecting them. It takes the babies about 40 to 50 days to fledge out fully and be able to fly.

If the babies are threatened in any way, they may cling to the body of one of their parents for safety. The adult will then fly away from the area where the threat exists, carrying the babies to safety.

The young birds will often stay near their parents for some time, even helping to care for the next group of babies once they hatch. Once the birds are sexually mature, usually by the time they’re a year old, they will pair up and start families of their own.

Moorhens don’t have a very long lifespan. They typically live between one and three years, but they can live longer. The oldest moorhen on record was part of a banding study in Louisiana in 1940. He was known to be almost 10 years old at the time he was recaptured and his band was checked.

The overall population of moorhens is stable and is believed to be in the millions. Overall moorhens are thriving and their numbers are steady. They are listed as a species of least concern by the IUCN. However, this isn’t true for all of the subspecies of moorhens.

Some of the subspecies, such as the Hawaiian moorhen, the Mariana moorhen, and the Indo-Pacific moorhen, number far fewer. Each of these smaller groups of birds contains no more than a few hundred individuals, despite efforts to protect them. All three of these types are listed as endangered, and these species may not survive because their numbers are so small.

Are moorhens all female?

The name “moorhen” refers to both male and female birds, just like the name “ladybug” describes both males and females of that species. The term “hen” in this case refers to the bird in general and not specifically a female bird.

What do moorhens eat?

Moorhens are omnivorous and eat a lot of different kinds of foods. They eat vegetable matter, such as fruits, berries, and seeds. They also eat all kinds of insects, water spiders, and worms. Other items on the menu for a moorhen include small fish, frogs, snails, rodents, and lizards. Sometimes moorhens will eat the eggs of other birds.

Moorhens are not normally aggressive, but this changes during the breeding season and when they are raising their young. At that time, they will aggressively defend their nest and babies from predators and from other birds. They are not known to ever be aggressive toward humans, though, preferring instead to run away or hide.

How do you cook a moorhen?

Cooking a moorhen is a lot like cooking a chicken. How you prepare it depends on your taste preferences. You can either pluck or skin the bird, then cook it your favorite way. Some of the better-known ways to cook a moorhen include roasted, slow-cooked with vegetables and gravy, basted in wine sauce, or skinned and grilled.

What are some other names people call moorhens?

Moorhens have lots of different names. Usually, people in different parts of the world will have different names for them. Some of the names moorhens go by include skitty coot, common gallinule, marsh hen, waterhen, and swamp chicken.

What Kingdom do Moorhens belong to?

Moorhens belong to the Kingdom Animalia.

What phylum do Moorhens belong to?

Moorhens belong to the phylum Chordata.

What class do Moorhens belong to?

Moorhens belong to the class Aves.

What family do Moorhens belong to?

Moorhens belong to the family Rallidae.

What order do Moorhens belong to?

Moorhens belong to the order Gruiformes.

What genus do Moorhens belong to?

Moorhens belong to the genus Gallinula.

What type of covering do Moorhens have?

Moorhens are covered in Feathers.

In what type of habitat do Moorhens live?

What are some distinguishing features of Moorhens?

What are some predators of Moorhens?

Predators of Moorhens include foxes, dogs, and raccoons.

What is the average clutch size of a Moorhen?

What is an interesting fact about Moorhens?

What is the scientific name for the Moorhen?

The scientific name for the Moorhen is Gallinula.

What is the lifespan of a Moorhen?

Moorhens can live for 1 to 3 years.

What is the lifespan of a Moorhen?

Moorhens can live for 1 to 3 years.

What is the Moorhen's wingspan?

How fast is a Moorhen?

A Moorhen can travel at speeds of up to 22 miles per hour.