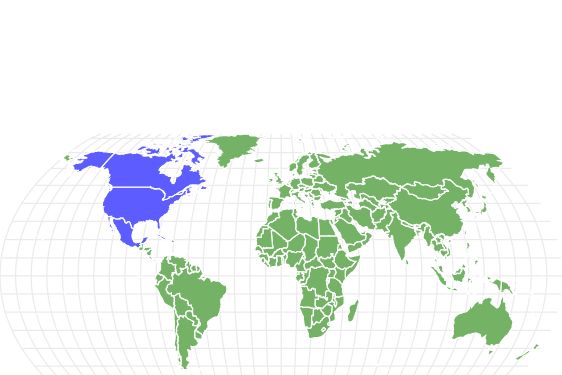 View all of our Northern Flicker pictures in the gallery.

View all of the Northern Flicker images!

Unlike you’d expect from a woodpecker, the Northern Flicker finds most of its food on the ground.

You’ve probably seen these large, brown woodpeckers if you live in North America, where they make their home. Unlike most woodpeckers, these birds spend a lot of time on the ground, as they eat mostly ants and beetles. These bugs get dug up with the woodpecker’s slightly curved bill from the soil.

Where to Find the Northern Flicker

You can find the Northern Flicker throughout the United States. In these areas, the bird stays year-round for the most part. However, in Texas and some other southern areas, these birds migrate to other areas to breed.

In Canada and Alaska, the birds stay during the spring and summer for breeding purposes. However, they migrate down to southern areas in the winter, as they cannot find food in these colder regions.

These birds are also found in some Mexican regions. However, they usually migrate north for breeding in the summer and spring.

Nests are usually around 6-15 feet off the ground. However, they can be as tall as 100 feet high.

Northern Flickers are in the Colaptes genus. This genus contains 14 different species. Many of these birds are more terrestrial than other woodpeckers. Therefore, it isn’t odd to find them on the ground.

All woodpeckers belong to the larger Picidae family. This family contains all woodpeckers. These woodpeckers are found worldwide, including in New Zealand and Australia. Therefore, it is a pretty wide-ranging family.

Adults Northern Flickers are brown with black bars on their wings. Northern Flickers measure around 11-14 inches and have a wingspan of 17-21 inches. Their body mass can vary widely, though they are usually between 3 to 5.9 ounces.

In the northern areas, their body size is typically larger. You’ll find the largest birds in Alaska, for instance. The smallest specimens are on Grand Cayman Island.

These birds have black patches on their upper breasts. However, their lower breast and belly are beige with black spots. Males have black or red stripes at the base of their beaks. The top of the tail is top in both genders.

Northern Flickers eat more bugs and insects than many other woodpeckers.

What Do Northern Flickers Eat?

These Northern Flickers eat mostly insects. Their favorites are ants and beetles, which they gather from the ground. However, they will also eat fruits and seeds – especially in the winter.

These woodpeckers commonly hammer the soil, where they find ants under the ground. Their tongues can dart out as many as 2-inches, which helps them find the ant larvae they love.

Other bugs commonly eaten include flies, moths, and snails.

Northern Flickers are extremely widespread and commonly found throughout the United States. However, their numbers are technically decreasing by about 1.2% per year. Over time, this has led to a significant decline over the years.

Young nests are extremely vulnerable to predators. Squirrels, snakes, and raccoons can raid nests and eat eggs or baby birds.

However, adult birds aren’t particularly vulnerable to predation. However, they are sometimes hunted by birds of prey. Cooper’s hawks and sharp-shinned hawks are the most common.

These woodpeckers breed throughout much of their range. Very few of their population migrate for breeding purposes. They breed in the cavities of trees. However, they will also use posts and birdhouses if they are appropriate. They prefer to excavate their own home, however.

It takes about two weeks for a mated pair to build their nest. Usually, their clutches are between six to eight eggs. Their eggs are the second-largest woodpecker eggs in North America. Incubation takes about 11-12 days, and each sex incubates the eggs.

The young are fed for about 15 to 28 days. After that, they leave the nest.

Currently, the estimated breeding population is about 12 million. This population puts the breed at a low conservation concern. However, they population is currently decreasing by about 1.2% each year.

Therefore, they may become endangered in the species.

Some of these birds do migrate, depending, on where they live. However, the majority of their population stays still.

How Many Eggs Do Northern Flickers Lay?

Usually, they lay between 5-8 eggs per clutch. Furthermore, they only lay one clutch per year.

What is a Northern Flicker's Wingspan?

These large-sized birds have a wingspan of 17-21 inches. Males are typically larger than females, though geographical area also plays a role.

When Do Northern Flickers Leave the Nest?

Most Northern Flickers leave the nest around 25-28 days after hatching.

What are the differences between the male and female northern flicker?

Apart from the apparent difference in their facial markings, males and females of the woodpecker species can be compared based on their mating behavior and calls.