Adults greet each other by clattering their bills together. 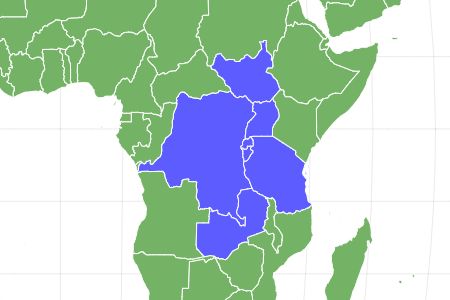 View all of our Shoebill Stork pictures in the gallery.

View all of the Shoebill Stork images!

Standing tall on its long, stilt-like legs, the shoebill stork cuts an imposing figure as it stalks slowly through the dense wetlands for its prey without making a sound.

Although it was once classified as a stork, it’s actually more closely related to the herons, hamerkop, and pelicans within the completely separate order of Pelecaniformes. The shoebill is the only living member of its family.

Where to Find the Shoebill Stork

The shoebill stork is commonly found in the dense marshlands and freshwater swamps of East Africa, including the countries of Uganda, Tanzania, South Sudan, and Zambia.

The stork’s nest is usually located on an island or a mass of floating vegetation in the middle of the swamp. It is made from a collection of reeds, papyrus, and grasses.

The scientific name of the shoebill storks is Balaeniceps rex. The genus name Balaeniceps is actually the combination of two Latin words that roughly translate into English as “whale headed.” Rex, meanwhile, means king or ruler in Latin, which refers to the bird’s exceptionally large size.

The appearance of the shoebill stork has sometimes been likened to a dinosaur. It’s characterized by long, spindly legs, blue to grey plumage, a powdered down on the breast and stomach, and a small tuft of feathers at the back of the head that forms a crest. By far the most prominent characteristic, though, is the massive shoe-like bill that ends in a curved hook, rightly earning this bird the nickname of whale headed. As one of the largest bills among all living birds, it’s used to catch and swallow large prey whole. Much of the bill is composed of hard keratin, the same substance as nails and horns. As you can probably imagine, this large bill also needs a strong head, neck, and body to support it. Standing between 4.5 and 5.5 feet in height (and with a weight of 12 pounds), the shoebill stork is among the largest birds in the world. Males are slightly larger in terms of body and bill size.

The shoebill stork can perhaps be described as an anti-social bird. Any encounters with other shoebills during its daytime foraging excursions are generally unwanted and undesirable. Even its mating partner will usually forage on opposite sides of the territory. That does not mean it is bereft of all social niceties, however. The shoebill will actually employ a technique called bill clattering to greet each other by pressing their bills together. Though otherwise silent, they will also make a whining or mewing sound to communicate.

Despite its enormous size, the shoebill stork has the ability to soar high above the wetlands on gusts of thermal wind. But in order to be born aloft, the bird must first make a large leap and a few heavy wing beats to catch a ride on the thermals.

The shoebill has two basic hunting strategies: “stand and wait” or “wade and walk slowly,” both of which occur right near the edge of the water. When it lunges, the bird’s entire head actually collapses into the water. The stork will probably not get a second chance, because it can take a few minutes to regain its balance and try standing again. After capturing prey, this bird will swing its head back and forth to expel vegetation from its mouth and then decapitate its victim or swallow it whole. The shoebill stork prefers to nest near low-oxygen water, where fish need to surface frequently to breathe.

What does the shoebill stork eat?

The shoebill likes to eat catfish, tilapia, bichirs, lungfish, and even water snakes. If no other food is available, then it may turn to lizards, turtles, frogs, mollusks, and even young crocodiles.

Due to their very particular ecological niche, shoebills are threatened by the conversion of wetlands into agriculture, grazing lands, mines, and dams. Civil war and poaching also threaten to disrupt their placid existence.

What eats the shoebill stork?

On account of its body size and big, sharp beak, the shoebill stork has few predators besides crocodiles and humans.

The shoebill stork invests enormous resources into the care of its young. By forming long-term monogamous pairs, they can divide up many aspects of parental duty, including nest construction, incubation, feeding, and child-rearing. The stork times its mating activities to coincide with the start of the dry season, so the chicks are ready to fledge when the rains begin. The parents are very fastidious about caring for the unhatched young. They will pour water over the eggs to keep them cool, cover them in wet grass, and turn them over with their feet or bill.

After about a month, the chicks will hatch with a darker shade of silvery grey down and a much smaller bill than their adult counterparts. Making a hiccup sound to communicate, they will need to be fed regurgitated food several times a day. However, if food is particularly scarce, then only one baby may survive beyond the juvenile stage. As depicted in a well-known BBC documentary, the shoebill parents will sometimes deliberately leave a chick to die. While this may seem cruel, it is a legitimate child-rearing strategy that ensures the strongest baby will survive.

Chicks will become capable of flight after about three to four months of age. At that point, the parents’ duty will be done, and the chicks will leave the nest. If they survive the juvenile stage, then the shoebill can live up to 35 years in the wild.

Despite the difficulty of accessing shoebill habitats, it’s been estimated that some 11,000 to 15,000 of these birds remain. The IUCN Red List currently classifies it as vulnerable to extinction. Most African countries within its range already extend protection to the shoebill, but habitat loss has continued apace for decades.

Does the shoebill stork migrate?

The shoebill does not migrate, but in certain locations, it might make seasonal voyages between nesting and feeding sites.

How many eggs does the shoebill stork lay?

The shoebill will lay up to three eggs in the breeding season.

How fast does shoebill stork fly?

This bird can fly at speeds up to 30 miles per hour.

What is the shoebill stork’s wingspan?

The shoebill has a typical wingspan of nearly 8 feet.

When do shoebill storks leave the nest?

A baby shoebill will leave its nests after about four months.

The shoebill actually behaves very calmly and docile around humans. It often allows people to approach relatively close. Some have said its stare can be intimidating, but this is probably just a result of its fierce-looking and implacable eyes.

How many shoebill storks are left?

Can a shoebill kill you?

While the beak is quite sharp, the shoebill has never been known to kill a person.

Where do shoebill storks live?

The shoebill lives in the swamps and wetlands of East Africa.

Many people seem to think that the shoebill appears like a prehistoric dinosaur, but besides the fact that all birds descended from dinosaurs, there’s nothing particularly prehistoric about it. The shoebill is just as “modern” as any closely related bird.

What is the height of shoebill storks?

The shoebill usually grows no larger than 4.5 feet in height and 12 pounds in weight.

Who would win in a fight: Shoebill Storks vs, Crocodiles?

A crocodile would win a fight against a shoebill stork.

The size, power, and brutal ambush techniques of crocodiles give them a massive advantage against these birds.