“The Sloth is the world’s slowest moving mammal.”

Sloths are animals that live in the treetops of Central and South American rain forests. They spend their days foraging and eating leaves, buds and twigs. These slow-moving mammals sleep 15 to 20 hours and only move as far as about 40 yards each day. But they have excellent swimming skills, thanks to their long arms.

Commonly called sloths, these animals bear the scientific name of Choloepus hoffmani. Distant cousins in the sloth superorder Xenarthra include anteaters and armadillos. Members of the order Pilosa and suborder Folivora, get their name from the Old English combination of the word “slow” with the ending “th.”

These animals have poor eyesight and hearing. But they can see in color. Because of these poor senses, they rely heavily on senses of smell and touch.

The outer coat of sloth fur grows, unlike other mammals, in the opposite direction of others. Mammal hair typically grows toward arms and legs. But sloth hair grows away from their arms and legs, parting down the middle of their chest and belly. This provides better protection against the elements since they spend most of their life hanging upside down.

Because this is the slowest mammal, their fur grows algae inside each of the hollow hairs. This green algae act as camouflage and helps these animals hide from predators in the treetops. Among the creatures living on their fur and in this special ecosystem are mosquitoes, sand flies, lice, mites, ticks, beetles, and moths. The moths fertilize the algae on their fur, helping more grow.

The limbs of these animals enable the mammals to hang from tree limbs. But these limbs do not support their weight well. This makes these animals helpless and clumsy on the ground. They can only drag themselves by their claws on the ground. So they only come out of the treetops once weekly. They do so to relieve themselves, then go back into the trees where they are less at risk from predators.

Despite not being safe or able to move well on the ground, sloths swim very well. They do a breaststroke like a human, using their long limbs to easily push themselves forward through the water. Their bodies float very well, too.

These animals do not spend time around each other, except for mating and rearing young. They act aggressively with sloths of the same gender. They live mostly nocturnal, solitary lives.

Modern sloths live in Central America and South America. But their ancestors lived in North America. In Central and South America they prefer the tall trees in rain forests, cloud forests, and mangrove forests. Each sloth moves about several trees throughout the course of their lifetime. But many spend their whole lives in one tree where they were born.

These animals sleep, eat, mate, and raise young while hanging from tree limbs. The only reason the animal leaves the treetops is to use the bathroom once weekly, find a mate or expand their territory.

These mammals have multi-chambered stomachs that contain many bacteria that break down plant materials. They digest food very slowly. It takes from one week to a month for them to digest most of their meals. These meals also prove low in nutrients, so they do not get energy from most of their food. Scientists believe this lack of energy is why they move so slowly.

The primary predators of these animals include jaguars, snakes, large birds of prey and humans. They defend themselves by swiping at predators with their long, sharp claws that extend from their lengthy arms. Humans hunting sloths for meat have realized that shooting them can prove pointless as these animals tend to remain hanging from towering tree limbs by their claws even in death. The best defense this animal has against any predator is that of using their algae-covered fur as camouflage in the trees.

These slow-moving animals eat poison ivy because it hurts the animals that eat them. Although they easily die at the hands of a snake, jaguar or large bird of prey, the poison ivy in their system suffocates the animal that eats them. The plant’s toxins cause the predator’s throat to swell, stopping its breathing.

Besides animal predators and man, These animals face other challenges to their existence. It is believe sloths have existed in one form or another on earth for at least 40 million years. But today, they face habitat destruction, road-building, traffic, power lines, tourism and the pet trade as their threats.

Some species mate at the same time each year. The maned sloths breed any time of year. Three-toed sloths have only one baby at a time after six months of pregnancy, whereas two-toed sloths are pregnant for 12 months. These newborns live with their mothers for five months. They cling to their mothers’ bodies during this time. Sometimes they fall to the forest floor and their mothers prove are either too lazy or too slow to retrieve them. As a result, the babies die not from the fall, but from being abandoned where they landed.

When a baby has grown to five or six months of age, they leave their mother. They claim a piece of her territory as their own. Although they do not live together again, the mother and her offspring continue to communicate throughout their lifetimes. They use loud calls to “talk” to each other.

For humans, it is difficult to gauge whether the animal is female or male. Zoos often receive the wrong gender than they expected. Scientists do not yet know the lifespan of these animals in the wild. But sloths in human care live for about 16 years on average. One female at the Smithsonian National Zoo in America lived for 49 years.

These animals continue to thrive in South America and Central America. On Panama’s Barro Colorado Island, these animals make up 70 percent of tree-dwelling mammals. Four out of six of the currently living sloth species on Earth do not face extinction. They are listed as “least concern.” But Eastern Brazil’s maned sloth classifies as “vulnerable.” Panama’s pygmy sloth that lives on that country’s islands is critically endangered.

Multiple sloth conservancy organizations exist today. They work to preserve the habitat and the animals, themselves. These organizations educate people about the biology, ecology, and conservation of these animals. They also rehabilitate injured sloths and return them to the wild. Click through all of our Sloth images in the gallery. 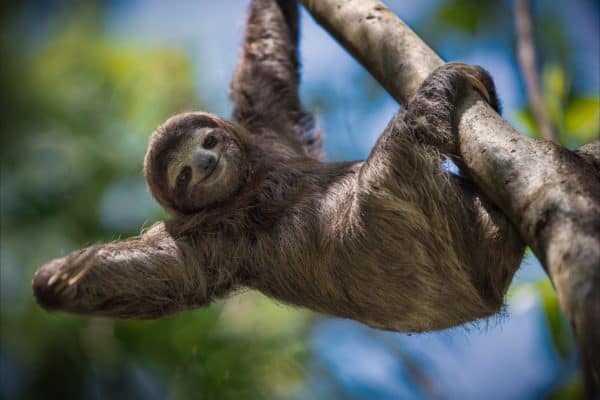 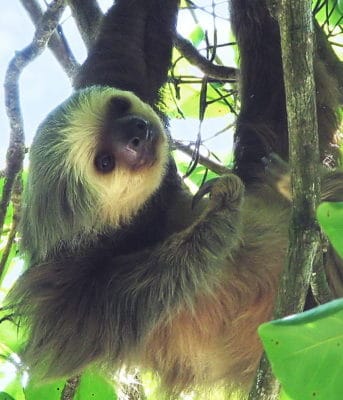 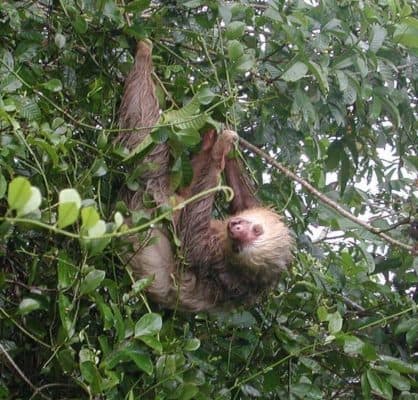 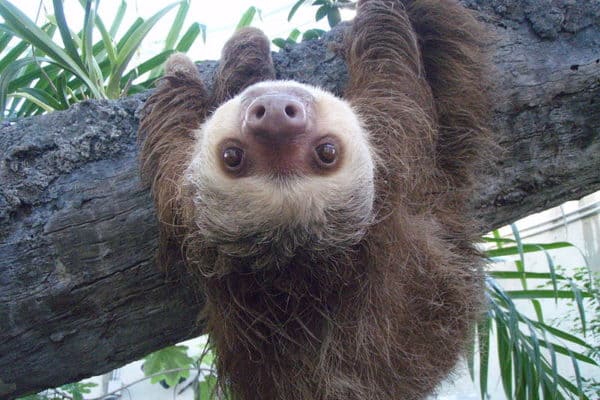 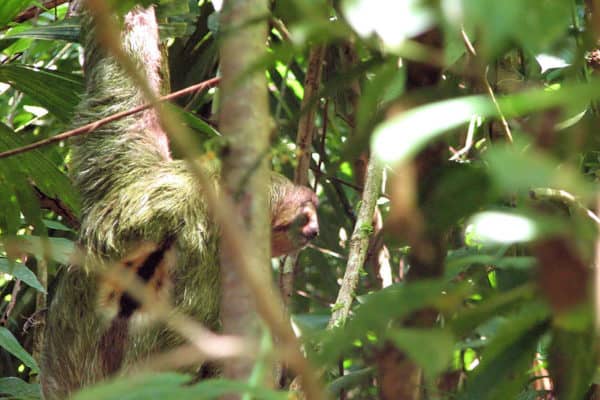 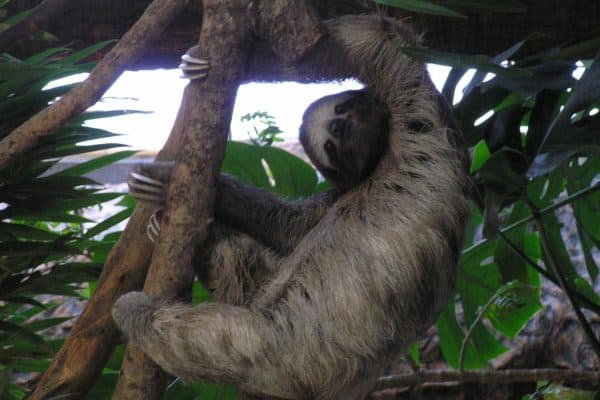 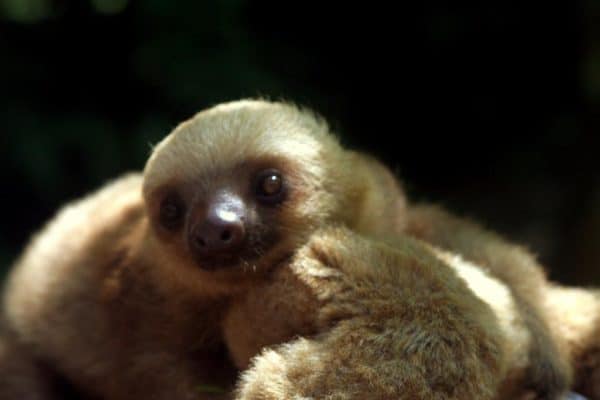 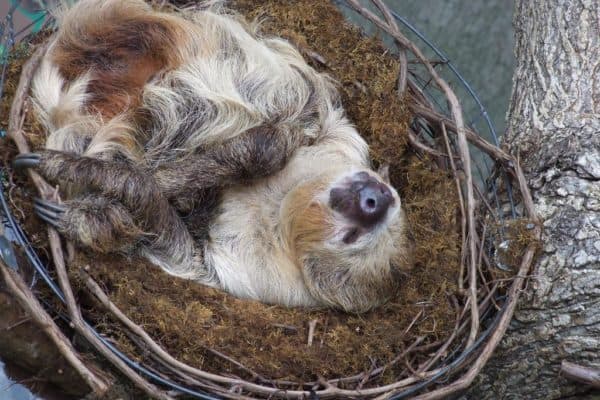 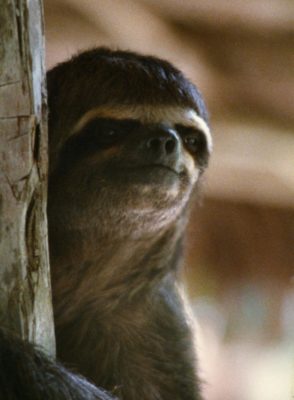 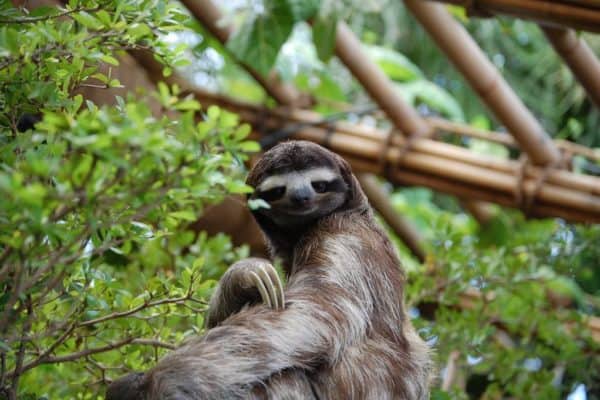 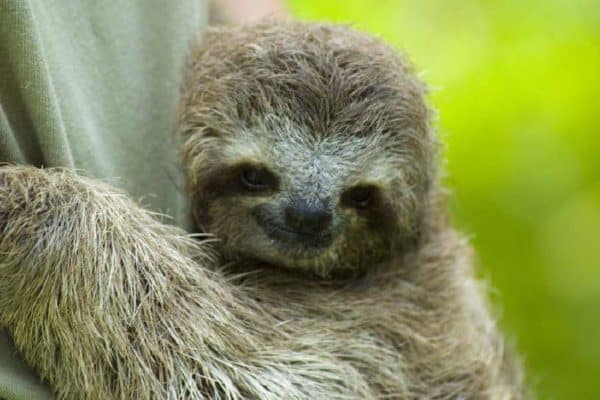 View all of the Sloth images!

What is a sloth?

A sloth is a tree-dwelling animal known as the slowest mammal on Earth. This fur-covered animals spend most of their lives suspended upside down in trees. They live in tropical rain forests of Central America and South America. There are six species of sloths, including some with two toes on their front feet and others with three toes on front feet.

Are sloths carnivores, herbivores, or omnivores?

Two-toed sloths are omnivores. They eat plants, small lizards and insects. Three-toed sloths eat most plants. This makes them herbivores.

What is a sloth bear?

Sloth bears are a type of bear native to India. These bears are not related to sloths. They are not slow, either. In fact, sloth bears move very quickly and even run faster than humans.

Sloths rely on their algae-covered fur to hide themselves in leafy treetops. But if a human tries to capture a sloth, this slow-moving animal becomes aggressive. A sloth swings it long arms with sharp claws and tries to bite anyone or anything attacking them. They also grab with force, digging their claws into flesh to hold on. But they will not chase or come after a human as a matter of choice. They only defend themselves.

Do sloths die when they poop?

Sloths must poop once each week. To do this, they must leave their safe perch in the trees to come onto the ground. A sloth’s pooping process is much like childbirth for a human. They lose one-third of their body weight during this process. At the same time, they are highly vulnerable to predators on the ground. Pooping is the only time a sloth stands upright. They first dig a hole in the ground to contain their poop, then cover it with dirt when done.

Why is a sloth so slow?

Scientists believe sloths are so slow because of the low nutrition they get from their diet, as well as a lifestyle that requires energy conservation. A sloth diet consists mostly of leaves, fruits and other plants. Without adequate nutrition, sloths cannot build energy. Digestion of these harsh substances also takes a long time, from multiple days to as long as a month for one meal. As a result, the sloth’s metabolism is very slow. Additionally, sloths are most vulnerable on the ground. The slower their metabolism and the more energy they conserve, the less frequently they need to travel out of their protected tree canopies and the more likely they are to survive.

What Kingdom do Sloths belong to?

Sloths belong to the Kingdom Animalia.

What phylum do Sloths belong to?

Sloths belong to the phylum Chordata.

What class do Sloths belong to?

Sloths belong to the class Mammalia.

What family do Sloths belong to?

Sloths belong to the family Bradypodidae.

What order do Sloths belong to?

Sloths belong to the order Pilosa.

What genus do Sloths belong to?

Sloths belong to the genus Bradypus.

What type of covering do Sloths have?

Sloths are covered in Fur.

In what type of habitat do Sloths live?

What do Sloths eat?

What are some predators of Sloths?

Predators of Sloths include eagles, snakes, and jaguars.

What is the average litter size for a Sloth?

The average litter size for a Sloth is 1.

What is an interesting fact about Sloths?

A Sloth’s body temperature is between 30 – 34 degrees!

What is the scientific name for the Sloth?

The scientific name for the Sloth is Choloepus Hoffmani.

What is the lifespan of a Sloth?