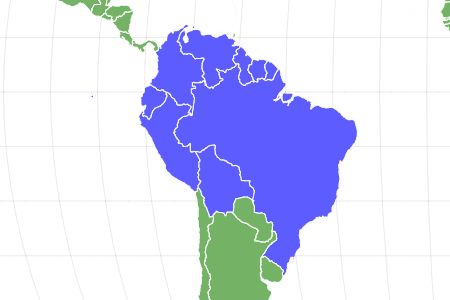 View all of our Unau (Linnaeus’s Two-Toed Sloth) pictures in the gallery.

View all of the Unau (Linnaeus’s Two-Toed Sloth) images!

The Unau also called Linnaeus’s two-toed sloth, is thought to be the slowest mammal in the world.

The sloth species is found in South America. It is nocturnal and lives in the trees of tropical and subtropical rainforests, where the climate is hot and humid and there are a lot of vines. Having a greyish brown color and a greenish tint, it is about two feet long.

Unlike other sloths, the identification of the two-toed sloth shows two toes on its front legs. However, its back legs have three toes as all sloths do. It has alternating light and dark brown, coarse fur to serve as camouflage among the trees, where it is invisible while not moving. The bristly outer layer of fur is six inches long and covers an undercoat of finer, shorter hairs. It is 23-28 inches long with an average of two feet and weighs 8.8-17.6lbs. Also, it’s the slowest mammal in the world.

Identification of it compared to the three-toed sloth also shows bigger eyes, longer fur, and more equal length of the front and back legs. Other differences for identification are a larger head, ears, and hind feet, long arms, and a shorter tail. Sometimes, its fur has a reddish tint but it usually has a greenish tint from algae. The shape of its mouth gives it a permanent smiling expression, made more obvious by its short snout. The few teeth of four to five sets it has do not include incisors or true canines. A group of sloths is called a bed, or more commonly, a snuggle.

Like other sloths, it is solitary and quiet. However, it is aggressive and can move very fast if it needs to. When threatened, it makes low cries, moans, and hisses. Sloths are generally the world’s slowest animals and this species is the world’s slowest animal because of their incredibly slow metabolism. It does well climbing in the rainforest or even swimming, but not moving on the ground. The nocturnal, solitary, arboreal (tree-dwelling) animal spends most of its time hanging upside-down from trees. Since it cannot walk, it pulls itself hand-over-hand. Unlike the three-toed sloth, it descends head-first. Although the unau can be active during the day, it spends 90 percent of its time motionless and sleeps 15-20 hours a day. It moves 6.5 feet per minute on the ground and 10 feet per minute in trees.

Because the unau is so sedentary, algae grow on its fur, which helps camouflage its fur. A small, thin body and large eyes help it be less noticeable while allowing it to see better, and its thick, long fur helps keep it warm. Moving in and out of the shade to keep warm, it keeps a body temperature of 86°F-93°F. It only leaves trees once a week to defecate on the ground. The long claws help it cling to tree branches.

Because it has little muscle and a very slow metabolism, it cannot shiver and relies on the temperature to keep warm – namely, the hot and humid climates of tropical and subtropical rainforests and cloud forests that make up its habitat. Its habitat range expands into Bolivia and includes Brazil north of the Amazon River, Peru, Ecuador, Colombia, Venezuela, and the Guyanas. Its range spans from northern South America east of the Andes Mountains and south to the central Amazon basin. Living in the high canopies of rainforests, each sloth has a home range of about 10 acres. When it wakes up at night to eat, it moves to a new tree for food but rarely passes more than 131 feet or 41 yards.

The Unau’s diet is omnivorous. It is a combination of herbivorous (plant-eating) and insectivorous, with the Unau eating leaves, fruit, twigs, buds, flowers, shoots, bark, berries, nuts, insects, bird eggs, rats, mice, and sometimes it resorts to eating the algae off of its fur for nutrition. It uses its lips to eat, smacking them together in place of incisors, which it does not have.

Having a low metabolism means it survives on very little food. Whereas other animals can digest food in a matter of hours, it takes days for the unau, even up to a month. Like many herbivores, it has a large, four-chambered stomach for fermenting and digesting plant matter. It gets water mostly from the vegetation it eats but sometimes drinks directly from rivers. Unique teeth with no enamel are not similar to those of other mammals.

The Unau is a strong swimmer. On the ground, however, it is vulnerable to predation. Predators of the unau are harpy eagles, jaguars, ocelots, anaconda snakes, domestic dogs, and humans. Humans hunt them for their coats, meat, and claws. They also shoot them for rainforest logging. Unau is often hit by cars on roads near their rainforest habitats. Although this species is not endangered, deforestation decreases the trees the Unau can rely on for shelter and food.

Not many facts are known about Unau mating patterns. What is known so far is that they are promiscuous and females initiate mating, which they engage in year-round. Their peak season may be March and April. Males are called boars and females are called sows. Females give birth once a year to live young. With a gestation period of six months, they give birth to a single baby. There is no unique word for baby sloths; they are simply called baby sloths or pups. The baby clings to its mother’s belly for the first five weeks of its life. It becomes independent at 1 year of age, although it stays with its mother until it reaches 2 years old. Females reach sexual maturity at 3 years and males at 4-5 years.

Not many facts are known about Unau’s population numbers. Its classification is listed as Least Concern on the IUCN Red List, with a population classification of unknown. This species is not endangered, but others of the six sloth species are endangered due to habitat loss and hunting.

View all 9 animals that start with U

Where do unau sloths live?

How much does a baby two-toed sloth cost?

Is it possible to have a pet sloth?

It depends on the state you live in, where laws determine whether it’s legal to have a pet sloth.

Is an unau the slowest animal in the world?

They’re really omnivores, although their diet is mainly herbivorous.

What is the pronunciation of unau?