Click through all of our X-Ray Tetra images in the gallery. 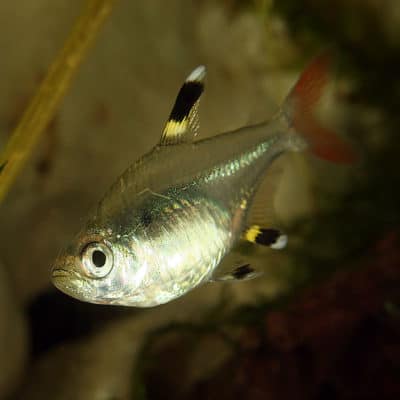 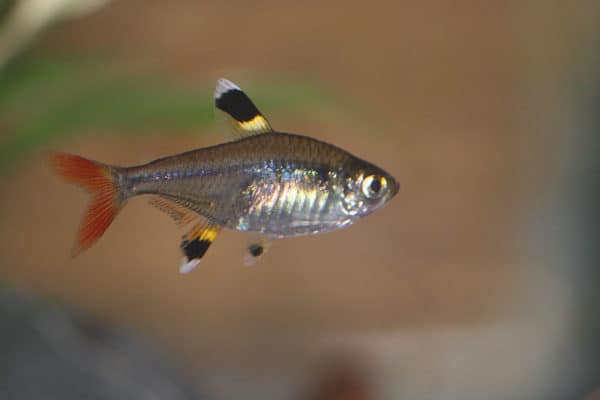 View all of the X-Ray Tetra images!

The X-Ray Tetra is a small species of schooling fish that is naturally found in the Amazon River’s coastal waters in South America. The X-Ray Tetra fish is also known as the Golden Pristella Tetra and the Water Goldfinch due to the faint golden colouration of their translucent skin. They were first described by Ulrey in 1894 and have since become one of the most popular freshwater Fish kept in artificial aquariums today. Although the X-Ray Tetra fish is the only known species in its genus, it is closely related to other small and colourful South American Fish, including the nearly 100 other Tetra species.

The most distinctive feature of the X-Ray Tetra fish is the translucent layer of skin that covers its small body, allowing the Fish’s backbone to be clearly seen. The scales of the X-Ray Tetra are a silvery-yellowish colour that is very faint, looking almost golden in some lights. The X-Ray Tetra also has a re-tipped tail and strikingly striped dorsal and anal fins that are yellow, black and white in colour. This is a relatively small species of Fish that actually has a bony internal structure known as the Weberian apparatus, which is used in picking up sound waves, and contributes to their acute sense of hearing (this bony structure is also found in many of their relatives). Females are generally slightly larger and rounder than the more slender males, although the two are very similar in appearance.

The X-Ray Tetra is found in the Amazonian coastal waters of Brazil, Guiana, Guyana, and Venezuela in South America. They differ greatly from other Tetra species as they are able to tolerate the harder brackish water closer to the coast, as well as their usual freshwater environments. They inhabit clear-water streams and tributaries during the dry season, and with the coming of the rains, the X-Ray Tetra then move into the flooded marshlands where the water is softer and more acidic. It is during the wet season that the X-Ray Tetra breed as they have better water conditions and a higher abundance of food.

Like many other small, colourful Fish, the X-Ray Tetra is a schooling species of Fish inhabiting the region between the bottom and middle of the water as a group. They are incredibly peaceful and are often tolerant of the other species that they share their habitats with. The X-Ray Tetra is one of the most adaptable species of Tetra as it is able to inhabit both fresh and brackish water happily, in both acidic and alkaline conditions. It is widely observed that those X-Ray Tetra that are kept in tanks, can change quickly from being peaceful to becoming skittish in the presence of larger, predatory Fish, with the same behaviour known to be displayed if the school size is not big enough.

During the rainy season. the X-Ray Tetra return to the flood-lands to spawn. Unlike many similar Fish who give birth to live young, the female X-Ray Tetra lays between 300 – 400 eggs by scattering them amongst the vegetation (when she is ready to spawn, the see-through skin means that her eggs can also be easily seen). X-Ray Tetra fry begin to hatch as early as 24 hours later, and become free swimming within a few days. Once able to swim, the small and dull white young, are able to find better food sources and soon develop their characteristic adult markings. X-Ray Tetra usually live for three or four years in the wild but can get to older ages in captivity.

Like many other small species of Fish that live in the Amazon River, the X-Ray Tetra is an omnivorous animal whose diet is made up of both animals and plants. X-Ray Tetra primarily hunt Worms, Insects and small Crustaceans that live close to the river bed and their fry tend to feed on Insect larvae. Although they are also known to supplement their diet with aquatic plants, they are predominantly micro-predators that feed on small invertebrates. In artificial communities, X-Ray Tetra need a variety of food sources including Brine Shrimp and Bloodworm alongside the standard flakes and pellets to ensure that they have a fully nutritious diet.

The small size of the X-Ray Tetra means that they should not be kept in the same aquarium as larger, predatory Fish, but will co-inhabit the tank peacefully with other small, schooling Fish that pose them no threat. In the wild, X-Ray Tetra are preyed upon by a number of aquatic predators including larger Fish and Frogs, and are also threatened by Birds and Snakes if they are closer to the water’s surface. Populations are thought to be the most under threat from the rising levels of pollution in the water and habitat loss in general.

The Weberian apparatus (the bony structure) in the X-Ray Tetra’s body works by transmitting sound waves through their vertebrate, that have been received by the swim bladder and are then taken to the inner ear, meaning that the X-Ray Tetra has excellent hearing. The transparency of their skin is thought to be a form of protection as predators find it much harder to spot them (along with their light yellow markings) amongst the dense vegetation, and shimmering water. Not only is the yellowish X-Ray Tetra popular in tanks, but an albino version of the species is also now commonly found in artificial communities worldwide.

Since it was first described in 1894, this unique animal has been the subject of much fascination due to its nearly transparent body. They are now one of the most popular species of tropical Fish to be kept in household tanks, mainly due to their ease of keeping as they are hardy, adaptable and undemanding. Their fast breeding rate is also thought to be one of the reasons why they have become quite so popular. Today, aquarium X-Ray Tetra do not come from the wild, but are instead commercially farmed for the trade, mainly in Eastern Europe and in the Far East.

The X-Ray Tetra has not been listed on the IUCN Red List as a species that is under threat in its environment. However, increasing industry in the Amazon Basin means that there has been an increase in the levels of pollution in the water and therefore a decrease in water quality, leading to slight population declines in certain areas.

View all 2 animals that start with X

X-Ray Tetras are Omnivores, meaning they eat both plants and other animals.

What Kingdom do X-Ray Tetras belong to?

What phylum to X-Ray Tetras belong to?

What phylum to X-Ray Tetras belong to?

What family do X-Ray Tetras belong to?

What order do X-Ray Tetras belong to?

What type of covering do X-Ray Tetras have?

X-Ray Tetras are covered in Scales.

What genus do X-Ray Tetras belong to?

Where do X-Ray Tetras live?

In what type of habitat do X-Ray Tetras live?

What are some predators of X-Ray Tetras?

Predators of X-Ray Tetras include larger fish, frogs, and birds.

What are some distinguishing features of X-Ray Tetras?

What is an interesting fact about X-Ray Tetras?

What is the scientific name for the X-Ray Tetra?

The scientific name for the X-Ray Tetra is Pristella maxillaris.

What is the lifespan of an X-Ray Tetra?

What is a baby X-Ray Tetra called?

A baby X-Ray Tetra is called a fry.

What is the lifespan of an X-Ray Tetra?

What is a baby X-Ray Tetra called?

A baby X-Ray Tetra is called a fry.

What is the biggest threat to the X-Ray Tetra?

The biggest threat to the X-Ray Tetra is water pollution.

What is the optimal pH for an X-Ray Tetra?

What is another name for the X-Ray Tetra?

The X-Ray Tetra is also called the golden pristella tetra or water goldfinch.