When most people think of Nebraska, they think of football, Warren Buffet, or endless fields of corn. After all, it’s not called the Cornhusker State for no reason. At the same time, Nebraska is not just home to cornfields or one of the world’s richest men. The state is full of natural beauty and home to many animals including the sandhill crane and nine-banded armadillo. However, if spiders are more your thing, rest assured that the state is home to more than its fair share of arachnids. From orb weavers to wolf spiders, here is a list of ten spiders in Nebraska that you may encounter during your next outing in America’s heartland.

The white-banded crab spider, Misumenoides formosipes, belongs to the crab spider family Thomisidae. It is one of the most common crab spiders in Nebraska and is widely distributed throughout much of the rest of the United States.

Adult females typically measure between 5 and 11 millimeters long, while males measure from 2.5 to 3.2 millimeters long. They feature a characteristic white line that runs through the space below their eyes, hence their name. While their color can vary, females usually appear white or yellow while males look dark brown aside from their gold abdomens.

White-banded crab spiders do not build webs to capture prey and instead use sit-and-wait tactics. They wait on the petals and leaves of flowers and then use their powerful legs to snatch insects that come in search of nectar and pollen. Like other crab spiders, they can walk forward, sideways, and backward like crabs.

Loxosceles reclusa is more commonly known as the brown recluse spider. Along with the black widow, it is one of the most venomous spiders in Nebraska. The brown recluse’s bite secretes necrotic venom that can cause symptoms ranging from vomiting to muscle aches to skin necrosis. While dangerous, most bites don’t require serious medical intervention.

Adult specimens generally measure from 6 to 20 millimeters long, with males measuring smaller than females. In terms of color, they usually look light or dark brown or grey. You can identify them by the black line pointing to the rear of the dorsal side of the cephalothorax that looks like a violin. This marking is the reason why some people refer to them as fiddleback spiders, brown fiddlers, or violin spiders.

Brown recluse spiders build asymmetrical webs that they hide in during the day. At night, they emerge to actively hunt for prey.

Tigrosa aspersa, or the tiger wolf spider, is one of the largest spiders in Nebraska. It belongs to the wolf spider family Lycosidae. Also known as the woodland giant wolf spider, it ranges throughout much of the eastern half of the United States.

Adult tiger wolf spiders generally measure around 25 millimeters long, with females measuring larger on average than males. Females appear predominantly black aside from their abdomens which look dark grey. On the other hand, males tend to look much lighter and can vary in appearance from light yellow to beige to tan.

Like other members of its family, the tiger wolf spider is an active hunter that does not use a web to capture prey. It is a ferocious hunter that either ambushes or chases its prey using its powerful legs. Despite its large size and fearsome reputation, its bite poses little danger to humans.

Mangora gibberosa, or the lined orb weaver, belongs to the orb-weaver spider family Araneidae. It is widely distributed throughout the eastern half of North America.

Female orb weavers measure between 5 and 6 millimeters long, while males measure slightly smaller in size. Their bodies range in color from white to light green, while their abdomens have green or yellow markings. They have thin, almost translucent legs covered in long spines. You can distinguish them from the similar-looking orchard spider by the two dark lines on their abdomens and the dark line running down the center of the carapace.

The lined orb-weaver constructs one of the most unique webs of all the spiders in Nebraska. The inner circle of its orb-shaped web is made of thicker silk that helps to stabilize the web and protect it from damage. Except for insects, its bite is relatively harmless.

The zebra spider, Salticus scenicus, is one of the most recognizable spiders in Nebraska. Outside of the Cornhusker State, you can find these unique-looking jumping spiders throughout North America and Europe. They tend to live near human developments and frequently wander inside buildings.

Female zebra spiders measure between 5 and 9 millimeters long, and males measure from 5 to 6 millimeters long. They get their name from their characteristic black and white stripes which resemble the stripes of a zebra. Like other members of the family Salticidae, they feature both large eyes and mouthparts.

Zebra spiders are active hunters that do not use webs to capture prey. Instead, they rely on their keen eyesight and jumping skills to ambush insects. While they predominantly prey on smaller spiders and insects, they can take down prey three times their size. Thankfully, their bite is not medically significant.

Adult long-legged sac spiders measure from 5 to 9 millimeters long, with males typically measuring smaller than females. They come in a range of colors including pale yellow, white, green, or brown. However, the abdomen is usually a lighter hue than the cephalothorax. Also, as their name implies, they possess characteristically long legs.

Long-legged sac spiders build tent-shaped silk shelters that they use to hide from predators but not for catching prey. At night, they leave their shelters to actively hunt for insects. They mostly rely on ambush tactics but can also move very quickly when they need to chase down their meal. While not lethal, their bite can be very painful.

The dark fishing spider, Dolomedes tenebrosus, is a member of the nursery web spider family Pisauridae. While it is one of the most common fishing spiders in Nebraska, you can also find it throughout the central and eastern United States.

Adult females can grow up to 25 millimeters long. On the other hand, males barely measure half that size. Their bodies appear predominantly brown or grey, aside from the dark spots and spines on their legs. You can normally distinguish them from other fishing spiders thanks to the W-shaped markings on their abdomens.

Female dark fishing spiders build webs to hold their eggs but not to capture prey. Instead, they hunt by using their legs as fishing lures to snare insects and small fish. They are also capable of running across the surface of the water or diving into the water to catch prey.

Adult females measure 11 to 15 millimeters long, and males measure 9 to 10 millimeters long. Unlike most spiders, they possess 6 rather than 8 eyes and feature disproportionately large mouthparts. Additionally, they have orangish-red legs and bodies aside from their abdomens which appear yellowish-brown or grey.

Woodlouse spiders are active hunters that do not use webs to capture prey. The bulk of their diet consists of woodlice, hence their name. That said, they will readily dine on other insects and spiders. While they possess a powerful bite, they otherwise pose little danger to humans.

The shamrock orb weaver, Araneus trifolium, is the second member of the family Araneidae to make our list of spiders in Nebraska. Outside of Nebraska, you can find this colorful spider throughout much of the United States and Canada.

Adult specimens can measure up to 19 millimeters long, although males generally measure smaller than females. In terms of color, they appear predominantly beige or brown but can come in a wide range of colors. At times, their abdomens may look pale green, orange, or yellow aside from their characteristic white dots.

Shamrock orb weavers can build webs that measure up to two feet wide. They use their webs to catch flying insects during the day and then rebuild their webs at night. Like other orb weavers, their bite poses no significant danger to humans other than some mild pain or swelling.

Steatoda borealis, or the northern cupboard spider, is a member of the cobweb or combfoot family Theridiidae. Also known as the boreal combfoot spider, its range extends throughout the northern United States and Canada.

Adult northern cupboard spiders measure about 7 millimeters long, with females measuring larger on average than males. They appear predominantly glossy dark brown or black aside from a characteristic T-shaped marking near their front. People often mistake them for black widows, which is why they sometimes go by the name false widows.

Northern cupboard spiders build irregularly-shaped cobwebs that they use to catch prey. They have poor eyesight and so must sense vibrations to tell when insects stumble into their webs. Although they resemble black widows, their bite is not as dangerous and normally causes only some pain, redness, and swelling. 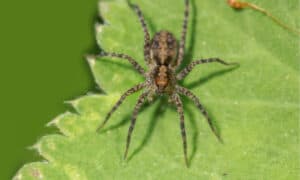 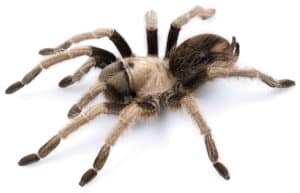