Click through all of our Woodlouse Spider images in the gallery. 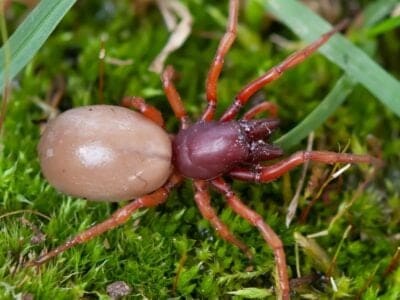 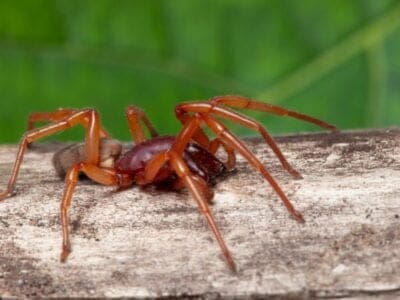 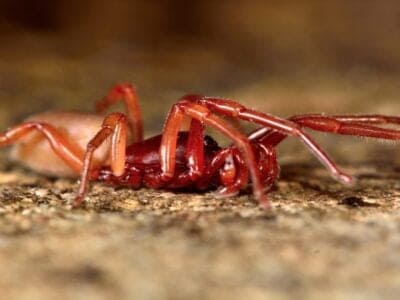 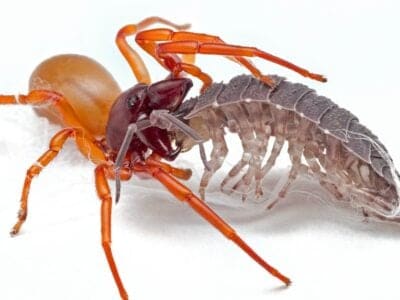 View all of the Woodlouse Spider images!

The Woodlouse spider is found throughout the world.

They live in Australia, Asia, Europe, North America, South America, and Africa. This spider is named for the woodlice it hunts in its habitat. These spiders don’t make a web. Instead, they capture prey with their fangs, then deliver a dose of venom. The lifespan of this spider is two to five years.

Dysdera crocata is the scientific name of the woodlouse spider. This spider belongs to the Dysderidae family and is in the order of Araneae. There are more than 500 species of woodlouse spider.

Some other spiders in the Dysderidae family are:

Appearance: How to Identify Woodlouse Spiders

Woodlouse spiders have a red, orange, or brown cephalothorax along with a bulbous, off-white abdomen. They have eight legs and two rounded, black fangs. This spider has six eyes.

Females are bigger than male woodlouse spiders. This is a common fact in the world of spiders. Males are 0.3 to 0.4 inches long. Females grow to a size of 0.4 to 0.5 inches.

Woodlouse spiders are known to be aggressive. This is especially true when it’s a female spider defending her egg sac. Their sharp, black fangs are effective when this arachnid is defending itself.

One of the most incredible facts about this spider is its fangs are capable of breaking through the exoskeleton of an insect. However, though they are aggressive toward other animals, they are most likely to hide or run away if it sees a human.

In addition, the brownish-red color of this arachnid helps it to blend into a dark habitat. This can help it to hide from predators in the vicinity.

Woodlouse spiders are solitary except when it’s time to find a mate.

Habitat: Where to Find Woodlouse Spiders

They seek out a damp, dark habitat. This could be a pile of old logs, a basement, a cellar, or in the wall of a home. Their wall habitat most likely contains damp or rotting wood where woodlice are present.

Diet: What Do Woodlouse Spiders Eat?

Like lots of other spiders, woodlouse spiders are carnivores. They are sometimes called woodlouse hunter spiders because of their stealth when hunting woodlice. These arachnids use speed and their sharp fangs to capture woodlice and other insects. They do their hunting at night which makes them even more difficult to see.

What does a woodlouse spider eat?

Take one look at this spider’s name and you’ll find the main component of its diet. Woodlice! They also eat beetles, millipedes, and other insects.

One of the most intriguing facts about this spider is it doesn’t make a web. It sneaks up on its prey and using its sharp fangs it bites into the insect’s abdomen. This is when the spider delivers venom into its prey.

Woodlouse spiders have a lot of the same predators as other types of spiders. They are hunted by birds, mice, and snakes.

Prevention: How to Get Rid of Woodlouse Spiders

Getting rid of woodlice is done by removing their preferred habitat. This means removing rotting wood in a home’s structure or moving a woodpile off the patio and away from a home’s walls. Any damp, dark area is going to be an inviting habitat for both woodlice and woodlouse spiders.

Blocking cracks and crevices in a home’s brick walls can be helpful in preventing woodlouse spiders from coming in.

Is the woodlouse spider poisonous?

Yes. But their venom is not dangerous to humans. Though a bite from this spider is painful it only results in irritated skin.

Yes, this spider does sometimes bite humans. But they do so out of self-defense. For instance, a person may reach into a woodpile or stick their hand into a dark corner of a basement in search of something. That could result in a spider bite. After all, both of these places are common habitats of this spider. A spider sees the person’s hand as a threat and may bite to protect itself or its eggs or its baby spiderlings.

Though their fangs are sharp and can be painful when pinching a human’s skin, this spider’s bite is not dangerous. It simply causes redness and irritated skin.

How do I get rid of woodlouse spiders?

These spiders enter a home in search of two things. A damp place to live and a supply of woodlice. Woodlice make up a big part of this spider’s diet.

So, getting rid of areas of rotting wood in a home or moving damp woodpiles away from the structure of a home help to get rid of these spiders.

As a note, if you see a woodlouse spider in your garden, it’s a good idea to let it remain there. They may live beneath the rocks or under piles of sticks near a garden without actually living among the plants. These spiders eat lots of insects that are harmful to the vegetables and other plants in a garden. So, in a garden, woodlouse spiders should be a welcome sight!

Where do you find woodlouse spiders?

How long has the woodlouse spider been around?

These spiders have been around for millions of years.

What is in the sac of a woodlouse spider?

A female woodlouse spider creates a sac made of silken threads where she keeps her eggs. Making a sac for her eggs is an easy way to stand guard over them to protect them against predators. A baby spider is called a spiderling.

Why are woodlouse spiders in my house?

They are attracted to damp areas. So, flooding or even water leaks that end up creating moist areas in a wall are attractive to these spiders.

Woodlice are the main diet of this spider. Woodlice are also attracted to the damp wood in a home. So, when homeowners find adult or baby woodlice, they are likely to find woodlouse spiders as well.

Where do woodlouse spiders live?

In addition to North America, these spiders live in South America, Australia, Asia, Europe, and Africa.