Francisco Gomez Perpinan/Shutterstock.com
Share this post on:
More Great Content:
Dogs With The Highest Bite Force
This Prankster Coyote Wasn’t Ready for a…
The 10 Most Dangerous Dog Breeds in…
Belgian Shepherd vs German Shepherd: 5 Key…
The Top 8 Oldest Dogs Ever
American Bully Vs American Bulldog: Is There…

There are differences between dogs that are pretty, dogs that are cute, and dogs that are beautiful. A pretty dog is a dog that is pleasing to look at but doesn’t fill the onlooker with awe. A person wants to play with a pretty dog.

Though an Afghan hound or a borzoi may be perfectly happy to engage in a game of fetch or roll around in the grass it’s tough to imagine these most beautiful dogs doing something so undignified. Types of cute dogs are usually small, have round heads, or just give a general impression of roundness.

They often have big, pleading eyes. These breeds are much like puppies even when they’re grown or frankly, human babies.

With all this in mind, here’s a list of nine types of prettiest and cutest dogs breeds.

This adorable little dog was developed in Belgium in the 1500s to be a guardian on barges and to probably nip at the heels of barge towing ponies. It’s a small dog that stands only 10 to 13 inches at the shoulder and weighs 12 to 16 pounds.

One of the prettiest dogs, it has a foxy head, big, erect ears, little feet, and straight legs, a short back, and a ruff around its neck. In the United States, the only acceptable color for its longish, harsh coat is solid black. Interestingly, schipperke puppies are almost always born without a tail.

This little dog is lively, confident, devoted to its humans, and great around children. Despite its size, it makes a good watchdog and is good for an apartment. However, the schipperke still needs lots of exercise and walkies and loves to be at liberty from time to time in a dog park. It’s a long-lived dog and can live more than 15 years.

Schipperkes are active, smart and curious dog breeds. They are great for owners who want a smaller sized dog. They can however be a bit stubborn but they won’t require a large yard to keep happy. In the 1690’s, the Schipperke became quite popular among sailors, leading to the nickname Schipperke which translates to English as “little captain.”

Read this to learn more about schipperkes.

One of the cutest dogs out there, the adorable Bichon Frise’s fluffy white double coat is often trimmed to let the animal resemble a collection of white powder puffs with eyes and nose that resemble round black buttons.

Developed in Spain in the 15th century, this dog stands 9 to 12 inches high at the shoulder and is delightfully portable as it only weighs 7 to 12 pounds. Another thing that makes this dog attractive is that its silky fur is hypoallergenic and doesn’t shed.

As a small dog, the Bichon Frise is just the thing for an apartment, though like all dogs it needs both long walks and exercise. Like other types of little dogs, the Bichon Frise lives a long time, as long as 15 years.

Read this to learn more about the Bichon Frise.

The Pomeranian is not only one of the cuter breeds but can be said to be one of the most beautiful dogs. It is a type of spitz, but it is little and stands only 8 to 11 inches at the shoulder, and weighs only between 4 and 5.5 pounds. Its beauty arises largely from the way it’s groomed, which is to make the dog’s luxuriant coat as round and fluffy as possible.

It takes about three years for the coat to mature, and it includes a profuse ruff, feathered legs, and a tail plumed with long, harsh hair that almost completely covers the body. The dog itself has an utterly cute face, with small foxy ears.

Pomeranians are happy, devoted, and smart. Developed in Germany in the 1800s, it was always bred to be a companion. Like so many little dogs, it is an amazing watchdog but can have health concerns. Pomeranian puppies are unusually small when they’re born and yet sometimes need to be delivered by Caesarean section. The Pomeranian is an excellent apartment dog, but with such a profuse coat it needs to be protected from hot weather. Poms live about 15 years.

Go here for more information about the Pomeranian.

This pretty little dog actually originated in northern Europe, as it is a type of spitz, but was brought to Italy in the 17th century where it was developed into its current form. Most of these “little foxes” have long white fur. Dogs with sable or red fur have become rare even among this rare breed, which almost went extinct in the 1960s.

Besides its foxy face, the dog has big round eyes, a squarish body, dainty feet, and as a spitz carries its tail curled over its back. Affectionate and playful by nature, it stands 11 inches at the shoulder and weighs about 10 pounds. The Volpino Italiano makes a good indoor dog as long as it gets its walks and exercise. It lives between 14 and 16 years.

Read this to learn more about the Volpino Italiano.

Because this dog was bred to be a companion for the emperors of China, it had to be a most beautiful dog, and it is. The face of a champion Shih Tzu, after all, is likened to a chrysanthemum. This is because the hair on the bridge of the dog’s nose grows up instead of down.

A little dog that stands about 10.5 inches at the shoulder, it has a double coat whose outer layer is dense with a slight, appealing waviness. The coat can come in many colors, from gold to blue to red to black. The hair on the face, with luxuriant beards and mustaches, is so long that it is often tied up at the top of the dog’s head to keep from covering its eyes. The plumed tail is held high, and the back is long while the legs are short.

The Shih Tzu usually weighs between 9 and 16 pounds, and if it weighs less than 9 pounds, it is called the Imperial Shih Tzu. It is described as a loyal, gentle and playful little dog and is good for apartment life. It lives about 15 years.

To learn more about the Shih Tzu, read this.

Another one of the prettiest dog breeds, this adorable dog is prized for its beautiful, silken, gleaming white coat, which can be so long that it hides the dog’s feet and needs to be gathered into a top knot to keep it out of the dog’s face.

Because of this, the coat of the Maltese needs a great deal of grooming, even if the cut is trimmed short. Yet, the dog’s fur is so soft that grooming must be gentle yet thorough. The Maltese’s humans are rewarded for this by their fur being hypoallergenic.

Humans are also rewarded by the Maltese’s vivacious, loving and devoted temperament. It is intelligent and a good watchdog despite its small size, having been developed in Malta as early as 500 BC to catch rats. It is only 8 to 10 inches tall and weighs between 6.5 and 9 pounds. Another benefit of owning a Maltese is that it is good for an apartment and has a long life.

Some have lived as long as 18 years.

Read this to learn more about the Maltese.

This tiny dog is pretty, but it is cuter than it’s pretty. Besides its long, wavy, silky coat, its back is steel blue with areas of tan or red on the legs and head. The silky terrier, raised to be a pet in 19th century Australia, has a wide skull, tiny feet, and a long, straight back. The coat, like the coat of the Maltese and the Bichon Frise, needs a lot of grooming to keep it in good shape.

The silky terrier stands 9 to 10 inches and weighs between 8 and 11 pounds. It is a spirited and intelligent dog that needs lots of exercise, even if it is a good apartment dog. Owners may be surprised by how much energy the little dog has. It has a life expectancy of 12 to 15 years.

Go here to read about the Silky Terrier.

This dog from Finland is too big to be one of the cutest dogs. It stands 18 to 23 inches at the shoulder and weighs between 44 and 50 pounds. However, it is one of the prettiest dogs. The Karelian bear dog is a somewhat rare dog that almost disappeared in the 1960s, and what makes it pretty is its black and white coloration and its spitz-like tail, which is held curled over its back. This brave and powerful dog was developed in the 1600s to hunt large game, including bears, and one of its other names is the Bjørnhund, or “bear hound.”

Because of its determination and independent mind, the Karelian bear dog is not a dog for a person who’s never had a dog before. It is beautifully adapted to outdoor life and isn’t suitable for an apartment. It needs lots of land to run around on and unlike some dogs on the list isn’t subject to serious health problems. It loves to swim and to run alongside a bike. The Karelian bear dog lives between 10 and 12 years.

The English springer spaniel is more pretty than it is beautiful. It’s not only a good-looking dog but is the progenitor of many types of modern-day spaniels. It was developed in 19th century Great Britain to flush or “spring” game. It has a noble head with long, feathered, lobe-shaped ears and a strong muzzle. There’s also feathering on the chest, the legs, and the cheeks.

The dog’s coat is weather-resistant and mostly white with spots and patches of black, liver, or roan, and the mostly white areas may have some ticking. The color of the eyes depends on the markings on the coat.

The English springer spaniel stands 19 to 20 inches at the shoulder and weighs between 49 and 53 pounds. It is a gentle and biddable dog that gets along well with children. As a gun dog, it has an excess of energy and needs lots of play, walks, and exercise. Despite this, and the dog’s size, it can do well in an apartment.

To learn more about the English springer spaniel, go here.

List of the Top Prettiest and Cutest Dog Breeds

Here is a list of the prettiest and cutest dog breeds you’ll see today: 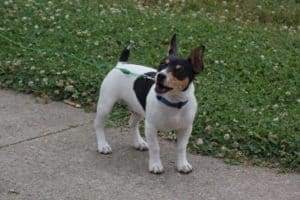 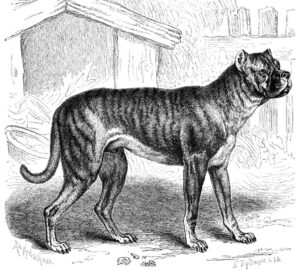