Click through all of our Chinese Paddlefish images in the gallery. 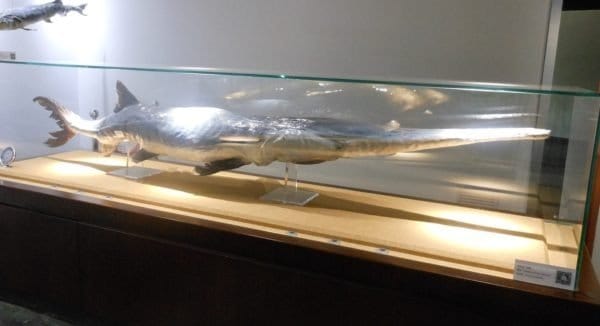 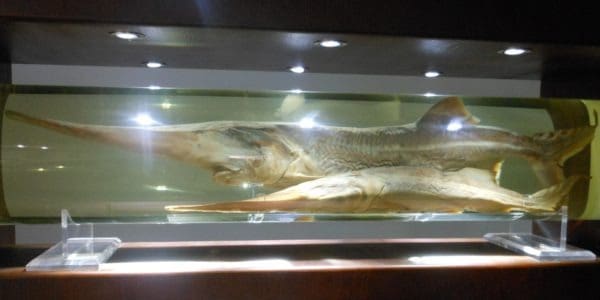 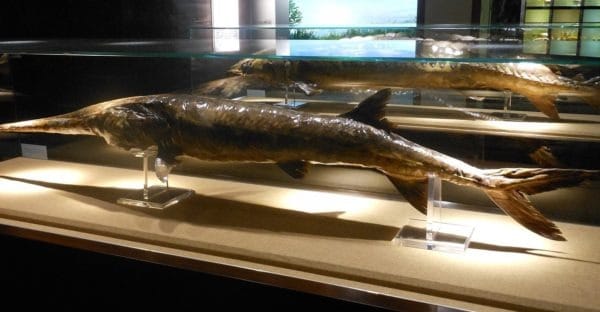 View all of the Chinese Paddlefish images!

The Chinese paddlefish is a large freshwater predator, appropriately named for the paddle-shaped snout extending from the face.

Large numbers of these fish once roamed the mighty Yangtze River of China. But after years of rapid decline, the Chinese paddlefish is believed to be extinct, a victim of human activity.

The scientific name of the Chinese paddlefish is Psephurus gladius. Gladius is the name of a Roman short sword, which resembles the fish’s nose. The paddlefish was the only living member of its genus and the only other member of its family besides the American paddlefish. More distantly, it occupies the same order as the sturgeon, which is another big predatory fish with a large snout.

There are many facts about the Chinese paddlefish that make it unique. It is one of the largest species of freshwater fish in the world. It measures up to 23 feet (though more commonly about 10 feet) and weighs up to 992 pounds. The paddle nose alone, which is the distinguishing feature of this fish, takes up a full third of the body length. It has a silver-grey back, fading to a white underbelly, with pink or red-colored fins. White ridges also extend along the side of the body. The smooth skin mostly lacks scales except near the fins.

The Chinese paddlefish was once endemic to the entire Yangtze River and its tributaries and connected lakes, including the Yellow River. Running between the mountains of Western China and the East China Sea near Shanghai, the Yangtze is the third largest river in the world and contains an enormous amount of aquatic diversity. An adult paddlefish will also sometimes spend part of its life in the brackish (salty) estuaries and coastal waters of the East China Sea.

According to the IUCN Red List, the Chinese paddlefish is a critically endangered species with an indeterminate number of specimens remaining, but some ecologists have already declared it to be completely extinct. The last confirmed sighting occurred in 2003 when an adult specimen was accidentally caught, tagged, and released back into the water. However, the signal from the tag was lost within hours, and a proven sighting has not occurred since then.

This species was a victim of overfishing and dam construction. National Geographic reported that 25 tons of paddlefish were harvested every year in the 1980s, which placed enormous strains on the populations. The construction of the Gezhouba Dam, located about a thousand miles from the sea, and later the Three Gorges Dam split the remaining population and prevented it from migrating upriver. This had the effect of driving down numbers to the point of near extinction.

The Chinese paddlefish was a top predator, dwarfing almost every other freshwater fish in the water. It was a strong swimmer with powerful jaws for feeding on prey.

What does the Chinese paddlefish eat?

What eats the Chinese paddlefish?

Due to its enormous size, the adult paddlefish had no other predators in its natural habitat. Humans were the only species that could kill an adult. However, the vulnerable eggs and juvenile fish were likely preyed upon in significant numbers by fish.

The Chinese paddlefish had a spawning season that traditionally lasted between March and April. Like many freshwater fish, it migrated every year to its upriver spawning grounds, which also made it vulnerable to dam construction and fishing. Once they arrived, the males and females released their sperm and eggs into the water, which mixed and fertilized together.

The young fish hatched a few days later, small and undeveloped, and were left to fend for themselves. After a short period in which it grew and fed, the paddlefish moved back downriver toward the sea to begin a new life. It takes around seven or eight years for this fish to reach full maturity. But because of its rapid decline, scientists could not study its reproductive strategies in great detail and learn any definitive facts about them. The fish’s long maturation period and lifespan interfered with the recovery once numbers began to decline rapidly.

Chinese Paddlefish in Fishing and Cooking

The Chinese paddlefish were heavily hunted in the 1970s and 1980s. Its predictable spawning behavior made the Chinese paddlefish relatively easy to catch in large nets as they swan along the river in schools toward the breeding grounds. The flesh was not the only desirable part of this fish, however. The roe (or eggs) were also considered to be a delicacy. It was made into caviar and sold at a high price.

What is a Chinese paddlefish?

A Chinese paddlefish is a massive freshwater fish with a paddle-shaped nose. Native to the Yangtze River network up to the East China Sea, this fish has a deep ancestry dating back almost 200 million years, which also gave it a very distinctive and unique appearance compared to more modern fish.

Despite several attempts made by researchers to search for this fish, no Chinese paddlefish have been sighted since 2003. After years of overhunting and habitat disruption, China extended protection to the paddlefish in 1989, but this was probably too little, too late since one study claims that the species passed the point of no return by 1993 in terms of its capacity to reproduce effectively.

How many Chinese paddlefish are left in the world?

There are no known Chinese paddlefish left in the world. Scientists have estimated that it probably went extinct between 2005 and 2010, although it’s not impossible that some specimens still remain somewhere in the wild.

Are there any Chinese paddlefish in captivity?

No Chinese paddlefish are living in captivity. Because of its size and unique requirements, it probably would have been difficult to raise in captivity.

What do Chinese paddlefish eat?

The Chinese paddlefish primarily feeds on small to medium fish that reside in its native freshwater river habitat.

What is the difference between a paddlefish and a swordfish?

Both species have an elongated bill, but there are many facts about the swordfish that distinguish it from the Chinese paddlefish. This marine fish, which is a member of a separate order, Istiophoriformes, has a very different appearance and reproductive behavior. It is found over much of the world’s major oceans instead of rivers. The swordfish apparently use their bills to bludgeon prey, while the paddlefish (or at least the American paddlefish) apparently use the bill as an electro-sensing device.