A very bold and ferocious predator! Click through all of our Ermine images in the gallery. 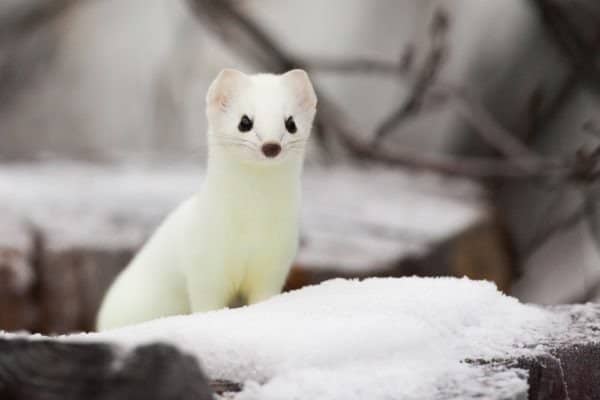 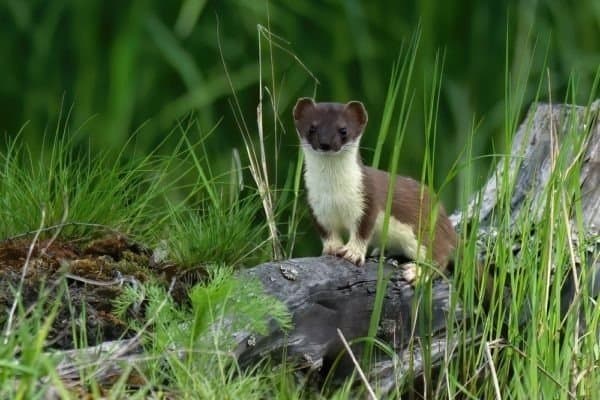 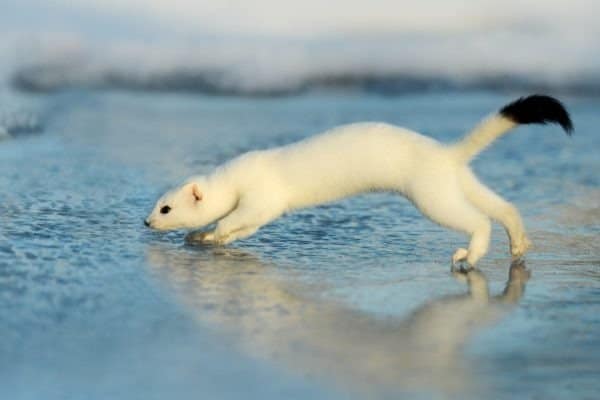 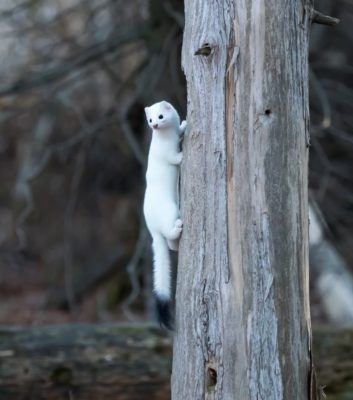 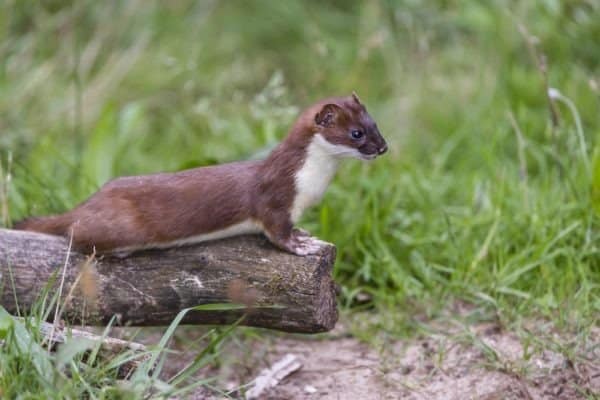 View all of the Ermine images!

Despite its small size, the ermine has a reputation as a fierce and territorial carnivore that can take on animals even bigger than itself.

The ermine is a type of weasel with a slender body that inhabits the temperate and arctic regions of Eurasia and North America. Also commonly known as the stoat or the short-tailed weasel, this species plays an important role in the ecosystem as both a predator and prey animal.

The scientific name for the ermine is Mustela erminea. Mustela describes a genus of weasels, minks, ferrets, and polecats with similar physical characteristics and behavior. More distantly, it is related to badgers, otters, and wolverines in the family of the Mustelid. These Mustelids also belong to the order of Canivora. Due to its wide distribution around the world, the ermine has quite a lot of regional variation. Some 37 or so subspecies are found all over its natural range.

The names ermine and stoat, though they describe the same thing, have entirely different origins. Stoat seems to come from the Dutch word stout. The name ermine likely comes from an Old French word referencing its white fur, but it’s not clear where it originated before that.

If you’ve ever seen an ermine in person or in a picture, then you would know that it looks much like a weasel. It has a long body and neck, short legs, black eyes, round ears, and a rodent-like head from which delicate whiskers emerge. The coat of fur undergoes a remarkable transformation with the changing of the seasons. It transforms from brown and yellowish white in the summer to almost pure white in the winter. The tip of the tail is also black. Weighing less than a pound total, the ermine is a rather small species. The male ermine measures up to 12 inches in body length and another 5 inches with the tail included. Females tend to be slightly smaller on average.

With its sharp claws and teeth, the ermine’s small size is more than compensated by its rather tenacious behavior. Even much larger predators must be wary about attacking an ermine. Perhaps for reproductive reasons, males tend to be more dominant and aggressive than females. Shortly after achieving independence, they seek out large territories for themselves, taking them by force if necessary. The female, on the other hand, tends to stay in the same place as her birth. On average, an individual ermine can carve out a territory around 25 to 100 acres large. That is quite a bit of land for such a small animal, although the territory of the male and female sometimes overlap.

The ermine alternates between sleep and wakefulness throughout the entire day, but it most actively hunts during the night. With its slender and lithe body, it moves in an unusual zigzag pattern back and forth by bouncing off the ground with about 20 inches per leap. The sight of the ermine in winter leaping through the tall snow, occasionally sticking its head out, can be quite comical. Although mostly land-based, it is also a very competent swimmer and climber. The average ermine can end up traveling more than nine miles every single night. It is very diligent about looking through every single nook and cranny in search of food.

The natural range of the ermine covers a very large area. It includes a northern stretch of temperate and arctic territory that wraps around Eurasia and North America. This animal is found as far north as the Arctic Ocean and Greenland and as far south as California and Spain. It was also introduced to New Zealand in the 19th century in an effort to control the local rabbit population. However, instead of just culling rabbits, the ermine also consumed many local bird populations, driving population numbers down. For this reason, many New Zealanders consider it to be an invasive species.

The ermine’s primary place of habitation includes woodlands, marshlands, and any plains directly adjacent to them. Its natural territory almost never stretches into large open areas such as the Great Plains. The ermine will take up residence in any small enclosed it comes across, including tree roots, burrows, stone walls, and hollow logs. It is not particularly picky about the details of its living arrangements. The ermine does not have the ability to dig its own burrow. Instead, it either finds abandoned burrows or takes the place of the animal it just killed.

The ermine’s diet consists primarily of small mammals such as rodents, shrews, and rabbits. It also mixes this up with frogs, fish, insects, birds, eggs, and whatever other meat it can find. The ermine is not afraid to attack prey just as big as itself, but it does require a different hunting strategy. To kill these larger prey animals, the ermine will seize it by the throat and bleed it to death. To kill smaller prey, by comparison, the ermine will sink its teeth into the base of the skull, killing it almost instantly. This species can be both a nuisance and help to humans. On one hand, it can sometimes invite reprisals from farmers by attacking chickens. On the other hand, it also has the tendency to hunt rodents and other pests.

For many centuries, the ermine has been historically hunted by humans for its fur to create pelts. The white winter pelts were sometimes prized by European royalty during the Middle Ages. Although forests are sometimes cleared for agriculture or habitations, this is not enough to pose a significant threat to the health of the worldwide ermine populations.

The ermine is a very promiscuous species that may have multiple mating partners throughout the breeding season (which usually lasts between the late spring and the early summer). The male will sometimes attempt to gain the favor of the female by bringing her freshly killed prey. Once they copulate, however, the father otherwise plays very little role in the actual development of the offspring.

Despite having multiple periods throughout the year, the female will only produce a single litter, born in April or May, after a gestation period of approximately 280 days. The gestation takes so long because the female has the ability to delay the implantation for a few months, perhaps due to food availability during the winter, with most of the embryonic development occurring within the last month of the pregnancy. She will likely become pregnant again before the previous offspring have even developed enough to leave the nest permanently.

The typical size of the litter is between four and nine individuals with as many as 18 offspring possible. The young kits, as they’re called, emerge from the womb with a coat of white fur and no eyesight. For the first few weeks of life, they are completely dependent on the mother for food and protection. It takes about two to three months before the ermine develops enough to begin hunting with its mother, but the kits will spend the entire first year of their lives learning how to properly survive in the wild.

Due to predation and disease with the young kits, the ermine’s average lifespan is just one or two years. However, if it can avoid an early death, the maximum lifespan is around seven to 10 years in the wild. Males take about a full year to reach sexual maturity, whereas the female reaches sexual maturity much quicker at around 60 to 70 days.

According to the IUCN Red List, which is the most comprehensive conservation tracker in the world, the ermine is a species of least concern. This means population numbers are high enough that no special conservation efforts are needed to improve their condition. However, each distinct subspecies may vary by population numbers and conservation status. It is thought, for example, that there are nearly 500,000 ermines spread across the British Islands. It is not entirely known how many ermines live around the entire world.

What is an ermine?

The ermine is a very slender carnivorous mammal that belongs to a larger group of weasels. It is also part of the Mustelid family. Apart from reproduction and child-rearing, this species has evolved to live and hunt alone, communicating almost exclusively through its scent glands.

What do ermine eat?

The ermine’s diet consists primarily of small mammals such as rodents and rabbits. Other potential prey also includes frogs, fish, insects, birds, eggs, and much more.

Where do ermines live?

The ermine inhabits forests and woodlands throughout much of the Northern Hemisphere of Eurasia and the Americas.

Is an ermine a mink?

The mink is not the same as the ermine, but rather a closely related semi-aquatic animal. There are two species of minks, the European mink, and the American mink. They are actually part of two separate groups. The European mink belongs to the genus Mustela along with the ermine. The American mink, on the other hand, belongs to a separate genus known as Neovison. It is the only currently living species within this genus.

What is the difference between a weasel and an ermine?

That depends on how you define a weasel. It can refer to the entire genus of Mustela to which the ermine belongs. But it can also refer to any of the individual species within this genus, including the long-tailed weasel, the least weasel, and the mountain weasel. Of these two, ermine can be described as a weasel in terms of its classification within the genus Mustela. In fact, an alternative name for the ermine is actually the short-tailed weasel. But many scientists think it is distinct enough in several characteristics to warrant a separate name, the ermine or stoat.

What Kingdom do Ermines belong to?

Ermines belong to the Kingdom Animalia.

What phylum do Ermines belong to?

Ermines belong to the phylum Chordata.

What class do Ermines belong to?

Ermines belong to the class Mammalia.

What family do Ermines belong to?

Ermines belong to the family Mustelidae.

What order do Ermines belong to?

Ermines belong to the order Carnivora.

What type of covering do Ermines have?

Ermines are covered in Fur.

What type of covering do Ermines have?

Ermines are covered in Fur.

What are some predators of Ermines?

What is the scientific name for the Ermine?

The scientific name for the Ermine is Mustela erminea.

What is the lifespan of an Ermine?

What is a baby Ermine called?

A baby Ermine is called a kit.

What is a baby Ermine called?

A baby Ermine is called a kit.

What is the biggest threat to the Ermine?

The biggest threat to Ermines is habitat loss.

What is another name for the Ermine?

The Ermine is also called the stoat or short-tailed weasel.

How many Ermines are left in the world?

The population size of the Ermine is unknown.

How many babies do Ermines have?

The average number of babies an Ermine has is 4 to 18.

What is an interesting fact about Ermines?

The Ermine is a very bold and ferocious predator!

How fast is an Ermine?

An Ermine can travel at speeds of up to 8 miles per hour.