For a nice price, the mynah bird makes a good pet.

Click through all of our Myna Bird images in the gallery. 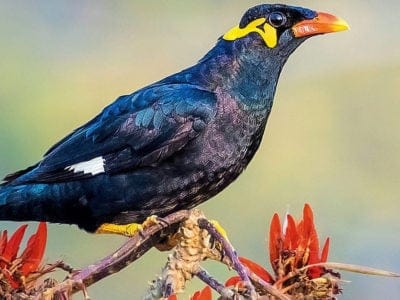 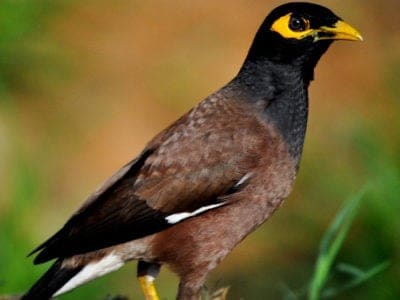 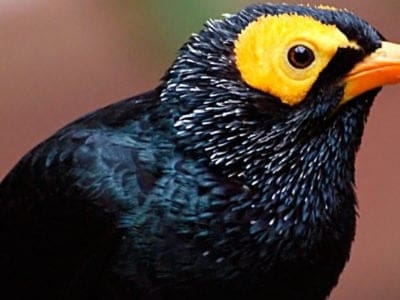 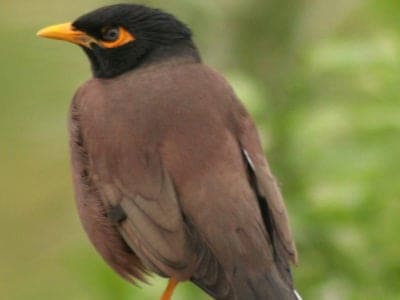 View all of the Myna Bird images!

The Myna bird is called “The bird who prays.”

Mynah birds are passerines or songbirds. They don’t all belong to one species or even one genus. All of them, basically, are types of starlings and belong to the family Sturnidae. These intelligent, admittedly noisy, and fascinating birds have been introduced around the world, including California, Hawaii, Florida, Australia, New Zealand, and Japan. Some species of mynah make enjoyable pets.

Where To Find the Myna Bird

In areas such as the Indian subcontinent, Hawaii, and even Florida, some species of mynah bird are plentiful, and they can be found flying around in pairs or as part of a flock. They can be easily found in the trees of forests, jungles, even public parks, and people’s backyards. Admittedly, the price of bringing mynahs to Hawaii islands is an imbalance of the delicate ecological balance that used to be found on the islands.

Most myna bird species nest in cavities in tall trees, but birds such as the bank mynah excavate nests in the mud of river banks or even in cavities they find in brick walls. Some mynah species are known to evict small mammals from their burrows. Mynahs line their nests with twigs, feathers, roots, rubbish, snarls of fibers, and leaves.

Since the myna bird is not one genus of bird, it has several scientific names. All of them are types of starlings, whose family name is Sturnidae. Sturnidae comes from the Latin for starling, which is Sturnus. Mynahs belong to the following genera:

Mynahs are medium-sized passerine birds with strong, usually yellow feet and legs. Their bills are also frequently yellow, though some mynahs have bills that are blue-green, black, or red. Their black feathers are often iridescent, and many species have yellow wattles or patches of bare skin on their faces or necks. Some birds have a ring of bare skin around each eye. Males and females are alike in most species though males may be a bit more robust. Some mynahs, such as the Sulawesi mynah, have tufts of feathers on their heads that form a crest, and the crest may be higher in the male.

Many types of mynah have a short tail, though the white-necked mynah’s tail is notably long. Not only this, but its black and white coloration has made people mistake it for a magpie.

Mynahs tend to be longer and heavier than most other kinds of starlings. The weight of the Nias hill myna can be as much as 14 ounces.

Mynas are gregarious birds who like to flock together, even when they are very young. When they’re not laying eggs or raising chicks, hundreds or even thousands of birds can roost together in trees, though during the breeding season they become very territorial and aggressive. Even outside of the breeding season mynahs are considered rather bold. The common mynah will even ant with fire ants. This means it will actually drop onto a fire ant nest and dust bathe or even pick up the ferociously stinging ants and drop them onto its feathers. The ants’ formic acid helps to kill parasites and may even render the ants edible.

Mynas who are foraging hop over the ground and use their beaks to pry open small holes to gain access to prey. Pairs groom each other. They are also amazingly vocal and have a repertoire of sounds that include screams, wails, gurgles, and whistles. The mynah learns these vocalizations when it’s young, and there are different dialects for birds that live far apart from each other. The common hill mynah is especially masterful at mimicry and can mimic a human voice with alarming accuracy.

Like other starlings, mynah birds are omnivores, which means they’ll eat anything that they can subdue, and that agrees with them.

Pet mynah birds can be fed pinkies, or baby mice, crickets, mealworms, and other kinds of insects. Now and then they can be fed fruits such as raspberries, apricots, and blueberries, and vegetables such as zucchini and spinach. Mynahs should not be fed too much dairy, as birds can’t process lactose. The owner of the mynah should also not give it avocados, chocolate, or food with caffeine. All of these foods are toxic to mynahs.

What does the Myna Bird eat?

The mynah bird diet includes smaller animals, the eggs and young of other birds, fruit, nectar, berries, and grains. They will eat human trash, roadkill, and some have even been known to enter the water to catch a fish.

The large flocks that myna birds sometimes form help to protect them from predators. Still, these passerines are subject to predation by crows, mongooses, and pet cats. Humans even catch mynah birds and eat them.

Mynah birds are subject to parasites such as tapeworms and mites, which is a reason they take ant baths. Other threats are habitat fragmentation and destruction, though a bird such as the common mynah adapts to and even benefits from human activity.

Many myna bird species start to breed in the spring, while others breed from fall to late winter or from late winter to late summer. Some breed more than once a year. Mynahs are monogamous, and each pair defends a territory, sometimes violently. After a courtship ritual that involves feather fluffing and head bobbing, females lay two to five eggs in a clutch. The eggs are often a light blue. The incubation time lasts from 13 to 18 days. Both parents incubate the eggs, though usually, the female spends more time doing so. Babies, called chicks are born blind and helpless, and both parents feed them.

It takes the hatchlings about 22 to 24 days to fledge, but they may not be able to fly for another week. Even then, the parents continue to protect and feed them. Mynahs are sexually mature when they’re about one year old. Depending on the species, they can live from four to 25 years.

The population of myna birds also depends on the species. The common mynah is, as its name says, common, and it may be a pest in some areas where it competes with native species. Other species are vulnerable or even endangered. These species include the Bali and Nias hill myna, which are both critically endangered, and the pale-bellied myna, whose status is vulnerable.

Myna birds can talk. Many people believe the hill myna bird is better at mimicking humans than a parrot.

Myna birds aren’t dangerous in themselves, but they can carry pathogens such as salmonella and bird mites. Too many mynahs in an area can destroy crops. Though they eat insect pests, they also eat insects that are beneficial.

How much does a mynah bird cost?

How long does a mynah bird live?

In captivity, a mynah bird’s lifespan can be 12 to 25 years.