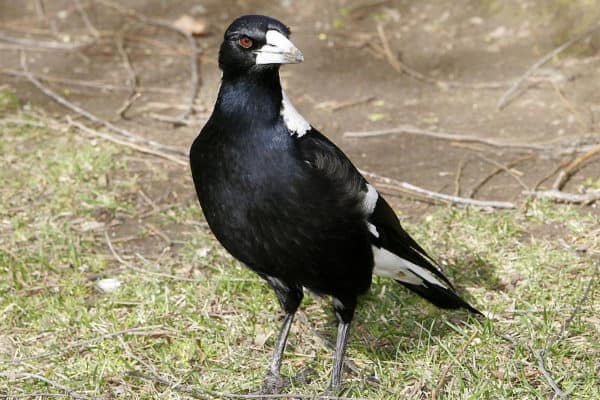 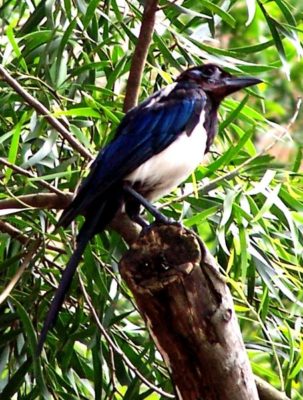 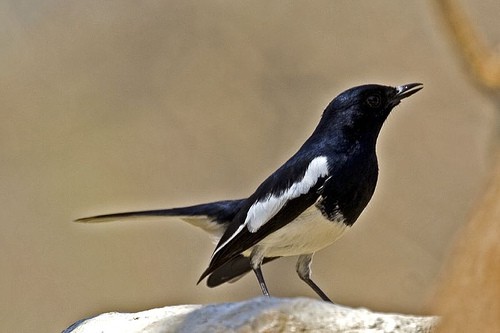 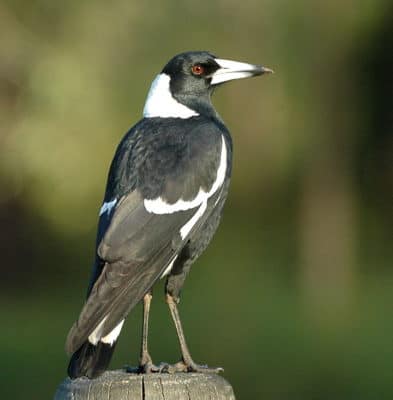 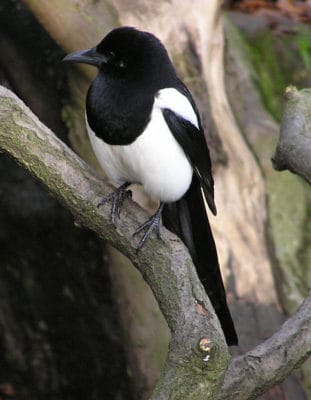 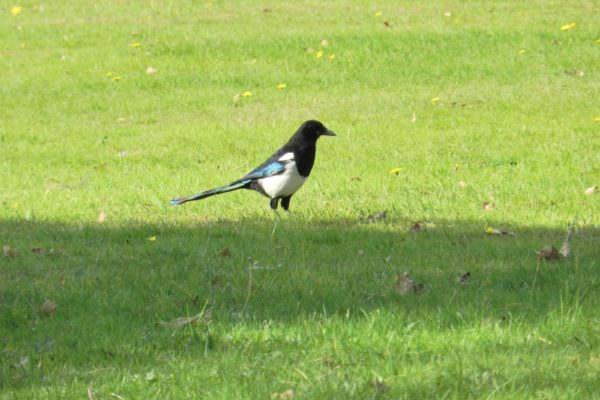 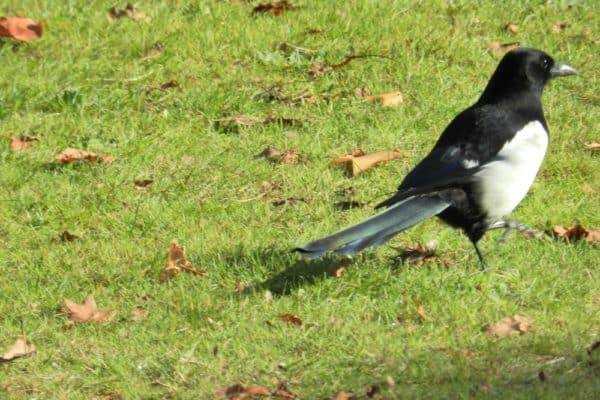 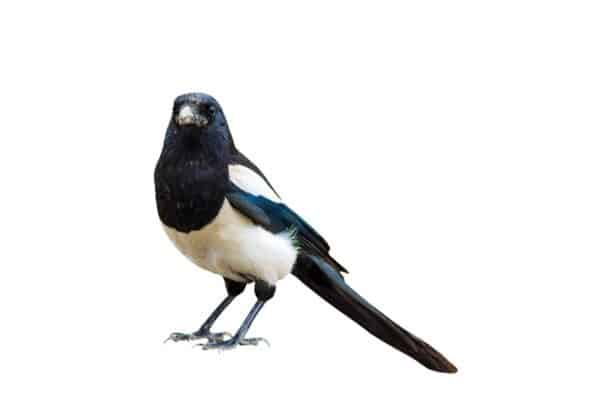 “Magpies are able to recognize their own reflection in a mirror.”

Magpies live in a variety of habitats including grasslands, meadows and on the edges of dense forests. These birds are omnivores and insects, berries, nuts, and even small rodents. They build large nests often with two entrances. Magpies are well-known for the variety of chirps, squeals, warbles, whistles, and other sounds they make. They live in flocks, or murders.

• A magpie’s tail is as long as its body.
• These birds sometimes eat ticks found on deer, elk, and other large mammals.
• They are in the same family as jays and crows.
• A splash of white feathers on their wings make them standout when taking flight.
• This bird lays from 6 to 9 eggs that are green/brown in color.

The scientific name of a Black-billed magpie is Pica hudsonia. The word Pica is medieval Latin. It was given to a magpie because the bird has a reputation for eating almost anything. Some other common names for this bird include the American magpie, Maggie and Flute-bird.
It belongs to the Corvidae family and its class is Aves. There are at least 17 species. The Black-billed magpie, the Australian magpie, the Eurasian magpie, the Oriental and Yellow-billed magpie are just a few examples of this species.

The Australian magpie has black and white feathers too. However, unlike the other two, it has white feathers running up the back of its neck. Plus, its bill is both white and black.

Magpies have tiny dark eyes that are always searching the environment. They have two dark feet with three thin toes pointing forward and one pointing backward. When these birds move, they take long, slow steps and seem to be strutting instead of just walking. This is another characteristic that has earned them a reputation for being aggressive birds.

Magpies usually grow to be around 19 inches long. Line up two-and-a-half pencils end to end, and you have the length of a 19-inch magpie. However, they can grow to be close to 2 feet long.

Magpies weigh approximately 6 ounces, which is a little bit lighter than a hamster you'd see at a pet store. The Eurasian magpie is the largest species of this bird weighing up to 9.6 ounces.

A flock of magpies is referred to as a parliament, tribe, or a mischief. Flocks of magpies are also called murders. Have you ever heard of a murder of crows? Magpies and crows are in the same family. So, there can be murders, or flocks, of both types of birds.

Generally, a flock is made up of a mating pair of magpies and their babies. So, a typical magpie flock would include about 8 birds. In colder areas, flocks of magpies are larger. This allows them to roost together to stay warm.

Living in a flock provides magpies with protection from predators such as hawks and owls. It’s not uncommon to see a flock of magpies work together to chase a predator away from a nesting area. Magpies also seek shelter from predators in dense forests and woods.

These are aggressive birds that are not afraid to land on deer, elk, and other animals to eat ticks from their fur. Also, they are familiar sights around farms, where they steal grain, seed, and other tidbits of food from inside the barn or off the ground. As a result, they are considered pests in many areas with farmland.

Magpies make their home in different places throughout the world, including North America, parts of Europe, Africa, and Asia as well as in the southeastern Asian islands. They need a temperate climate to survive.

Magpies live in grasslands, meadows and on the edges of forests. These birds look for food in open areas of land but live near dense forests so they can easily seek shelter from predators. Their nesting areas are usually found in shrubs or trees growing near rivers and streams. This gives the birds easy access to water without going far from their young.

Some magpies living in northern areas move slightly south when the cold weather season sets in. For instance, a Black-billed magpie living in the Rocky Mountains in Colorado may move to a lower elevation when the weather turns cold. However, they don’t stray far from their year-round home. For the most part, these birds don’t migrate.

Magpie Population -- How Many Magpies Are Left?

There are estimated to be over 5 million Black-billed magpies living in North America. Their official conservation status is Least Concern. Their population is holding steady though these birds face some threats. For instance, they are considered pests by some farmers because they steal seed and grain from around barnyards. A farmer may put out poison to kill magpies that have invaded their property.

A few magpies in other parts of the world are categorized as Endangered. For example, the Asir magpie’s population is decreasing due to loss of habitat. The Juniper forests in Africa where they live are being cleared.

In addition, the Javan Green magpie is Critically Endangered. The population of this magpie in southeast Asia is decreasing because they are trapped by humans in order to be sold as pets.

Scientists believe there are an estimated 19 million breeding pairs of Eurasian magpies. Their conservation status is Least Concern and their population is stable.

The Australian magpie has a conservation status of Least Concern as well and its population is increasing.

What do magpies eat? Magpies are omnivores so they aren’t limited to eating plants or animals. They eat whatever food source is most plentiful in the environment at the time. Grasshoppers, berries, nuts, beetles, caterpillars, and rodents are all on the menu. These birds sometimes steal eggs and even chicks from the nests of other birds. Consequently, magpies are sometimes called nest predators.

In addition, magpies have been known to follow coyotes or foxes as they go out to hunt. This is so the birds can steal some of the meat from the animal killed by these predators.

Magpies have several predators including domestic cats, dogs, foxes, and owls. Also, they can have eggs as well as chicks stolen out of their nest by raccoons, hawks, weasels, and mink.

Magpies are bold birds that aren’t afraid to spend time around humans and residential neighborhoods. They steal food from trash cans and may even try to eat from a bird feeder. This activity makes them vulnerable to dogs and cats in the area.

The breeding season for Black-billed magpies goes from March to July. Male magpies try to get the attention of females by showing off the glowing white feathers on their wings.

Once a male and female become a breeding pair, they are together until one of them dies. If one of the pair dies, the other magpie may find another mate, but that’s not a certainty.

A male and female magpie build a nest together. These birds create an unusually large nest out of sticks, grass, string, hair, vines, and mud. The average nest is 20 inches wide and 30 inches tall. Interestingly, the nest of a magpie has a canopy, or roof, made of sticks as well as two entrances. These birds sometimes build their nest as high as 30 feet up in the branches of a tree.

A female magpie lays from 6 to 9 eggs per clutch (group). It takes from 16 to 21 days for the eggs to hatch. Each egg is a little over an inch in length. While the female is sitting on the eggs, the male magpie looks for food to feed his mate.

A baby magpie is called a chick. Once it leaves the nest and begins to explore its environment, it’s known as a fledgling. These birds are born blind and without feathers. In the first week of life, the chicks grow a layer of downy feathers and their eyes open around day 10. Both the male and female magpies take turns bringing small insects and other food to their chicks. The baby magpies leave the nest when they reach about 25 days old.

Young magpies stay with their parents in the flock for about two years. Then, they are pushed out of the flock to form another group.

The average lifespan of a Black-billed magpie in the wild is 3.5 years for a male and 2 years for a female. Alternatively, a magpie in captivity can live to be 20 years old. The oldest magpie on record is a Eurasian magpie that lived to be 21 years and 8 months old.

As magpies get older they can develop many of the same respiratory issues as other birds. Also, they can take on parasites such as ectoparasites and lice that can contribute to shortening their life.

• Visit and learn more about the Azure-Winged magpie at the Memphis Zoo.
• Visit the Los Angeles Zoo and Botanical Gardens to see the Yellow-Billed magpie.
• The Minnesota Zoo has an Oriental magpie on display to enjoy.

What is a magpie?

A magpie is a bird in the same family as crows and jays. It’s an omnivore that eats insects, rodents, fruits, nuts and more. There are at least 17 species of magpie living on different continents.

What is a magpie known for?

Magpies are birds known for their bold personality and intelligence. They are also well-known for their calls and songs. Many birds have a song or a few calls, but magpies chatter, whistle, trill, and warble. These birds have even been known to mimic sounds around them such as wind chimes or a dog’s barking. Not surprisingly, when flocks or murders of magpies begin to call to one another it can get very loud!

Magpies are not dangerous; however, they are territorial birds. This means they don’t like other animals to approach their nest. Oftentimes, when a predator such as a hawk or a raccoon tries to steal eggs from a magpie’s nest, a flock of magpies will try to chase the intruder away.

If a person ever got too close to a magpie’s nest, the bird may flutter and flap its wings trying to frighten the person away. The magpie would do this in an effort to protect its young even if the person meant no harm.

What is the difference between a magpie and a crow?

Crows and magpies are in the same family and they are both intelligent birds. Despite many similarities there are some differences between them.

Crows are smaller than magpies. A magpie has a tail that accounts for half of its body length. A crow’s tail is short making it smaller than a magpie.

Crows migrate in the fall season whereas magpies don’t migrate.

A crow’s body is covered in black feathers without any markings. Alternatively, a Black-billed magpie has a combination of black and white feathers along with green mixed in. Other species of magpie have feathers that are even brighter in color.