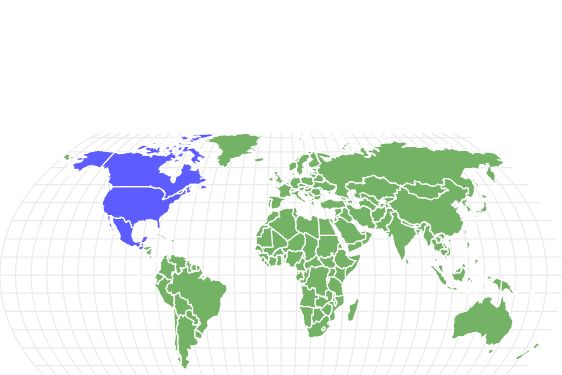 View all of our Northern Cardinal pictures in the gallery.

View all of the Northern Cardinal images!

The northern cardinal is a mid-sized songbird also called by its common names cardinal, red cardinal, common cardinal or redbird. It lives in North and South America. Introduced to Bermuda in 1700, it was also introduced to southern Arizona, southern California and Hawaii. The bird is one of many species of cardinal, so named for having the northernmost range, plus its cardinal-red color.

Where To Find Northern Cardinals

The natural habitat of the northern cardinal is wetlands, shrublands, gardens, and woodlands. You can find them in the southern half of Maine, Minnesota, the Texas-Mexico border, southern Canada, Mexico, northern Guatemala, northern Belize, Bermuda, Hawaii, southern California and southern Arizona. It nests in trees and shrubs. January through September is the mating season which is when people are most likely to see the bird.

The habitat of the redbird is dense shrubs and low trees about 3.3-9.8 feet off the ground. It is mostly the female who builds the nest, with the male providing nesting material. The nest has a cup shape and is made up of four layers being coarse twigs, sometimes with pieces of trash, grapevine bark lining, and then pine needles, rootlets, stems and grasses. It takes three to nine days to build, with the completed nest measuring 2-3 inches in height, 4 inches across, and an inner diameter of about 3 inches. The pair usually uses the nest only once.

There are 14 genera in the family Cardinalidae, also known as cardinal-grosbeaks and cardinal-buntings. There are 3 species in the cardinal genus Cardinalis. 19 subspecies of Cardinalis cardinalis exist, with C. cardinalis being the type species.

The northern cardinal is a mid-sized songbird characterized by its raised crest and bright beak featuring a coral color. It measures 8.3-9.3 inches in body length with a wingspan of 9.8-12.2 inches. Males are a cardinal red color and females are olive-brown with red accents; males are also somewhat larger in length and weight than females. Adults weigh 1.19-2.29 ounces with an average weight of 1.58 ounces. Due to their bright color (whether the red body of the males or the coral color of both of their beaks) they conceal their nests in dense trees and shrubs.

They do not migrate and do not molt their plumage into a dull color. Instead, they lose a few feathers at a time from their bodies, and often lose all the feathers on their heads. Molting occurs during late summer through mid-autumn. Baby cardinals are born featherless with grey scaling and pink skin, and during molting get a tan color which changes to light, mottled browns and soft reds before sexually dimorphic colors develop. Their beaks start off black and fade to a coral red color.

The calls of males and females are sexually dimorphic due to hormonal differences. However, they are indistinguishable to the human ear. Northern cardinals have a variety of songs. Males are territorial, and one of their calls is a clear, high whistle from high up in a tree to defend their territory. Both sexes learn their songs and so their songs vary depending on their area. Their songs consist of clear whistles in repeating patterns at first which then become varied. They also make metallic, short chip sounds as warning calls against predators or for a pair to locate each other. When not mating, northern cardinals rejoin their flock.

The northern cardina’s typical food consists of grains, seeds, fruit, and insects. Insects include grasses, grains, tree buds, nuts, cutworms, caterpillars, grasshoppers, termites, spiders, and beetles, which it digs from the ground and bushes with its strong beak. Insecticides and other chemicals are toxic to them. For a complete list of the foods cardinals eat, check out our “What Do Cardinals Eat?” page.

Because the northern cardinal looks for food on the ground, and it has bright colors, other animals can easily see it. The search for food leaves it vulnerable to predators, especially birds of prey like eagles and owls, and even moreso during the winter in contrast with snow. Other birds of prey that hunt northern cardinals are hawks, falcons, and shrikes. Snakes and domestic cats also hunt them. Even squirrels and chipmunks can kill them, as can crashing into windows. Predators of eggs and chicks are domestic cats, chipmunks, squirrels, crows, blue jays, and snakes.

Mating season for northern cardinals begins as early as January and ends as late as September. They usually mate for life, although they may have other mates between seasons, and when their mate dies, they find another one. Males feed females in order to bond with them, and also provide nesting materials. They sing together before nesting.

Females lay eggs one to six days after completing the nest, with a clutch size of three or four eggs each time and two to four broods each year, with the first brood around March and the second between May and July. The eggs are white tinted brown, blue or green, with brown, grey or lavender blotches which get thicker at the larger end. Their shells are smooth and somewhat glossy. They measure 1.02 x 0.75 inches in size. Females do most of the incubating, with the male incubating briefly on rare occasions, during the period of 12 to 13 days. While the females incubate the next clutch, males feed and care for the existing brood.

The bird reaches sexual maturity at 1 year, while its lifespan is an average of 3 years in the wild. Each year, 40 percent die, and many juvenile birds don’t live to adulthood, often only living about a year. The oldest wild cardinal was 15 years old, but in captivity, the oldest cardinal was 28.5 years old.

According to the known facts about the bird, the northern cardinal is not endangered or threatened, but it can encounter many outdoor hazards. The IUCN Red List states its population is stable and listed as Least Concern.

What does it mean when you see a Northern cardinal?

Seeing any red cardinal symbolizes a ray of hope and represents good luck and new beginnings.

What is the difference between a cardinal and a Northern cardinal?

The geographical range in which they are found.

Where do Northern Cardinals live?

What do Northern cardinals eat?

How many eggs do Northern cardinals lay?

How fast do Northern cardinals fly?

What is Northern cardinal's wingspan?

When do northern cardinals leave the nest?

What are the differences between male and female northern cardinals?

Male and female northern cardinals have some differences in their size, appearance as well as behaviors. 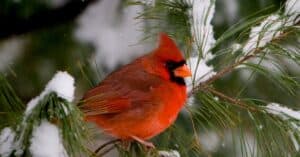 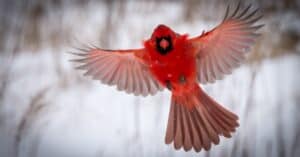 Male vs Female Northern Cardinal: What are the Differences?