The skipjack is the most commonly caught tuna in the world Click through all of our Skipjack Tuna images in the gallery. 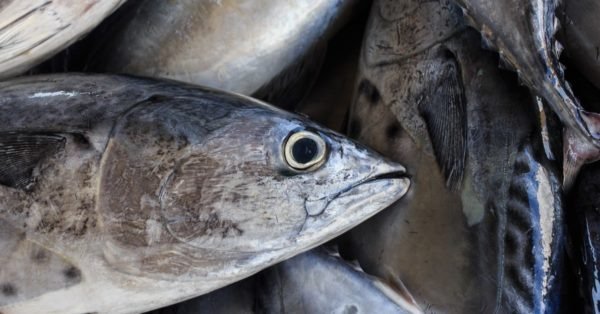 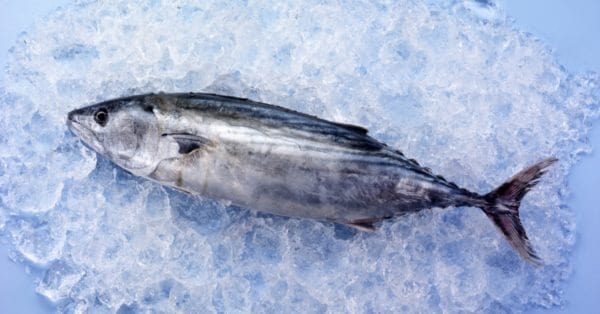 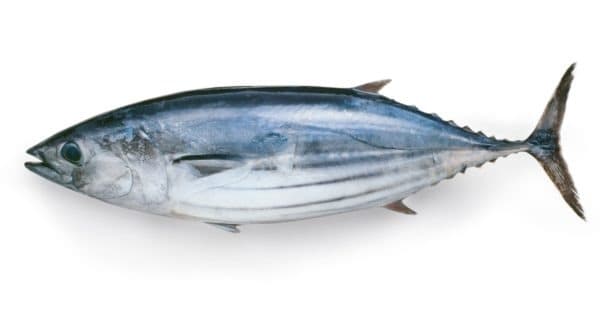 View all of the Skipjack Tuna images!

The skipjack tuna is among the most abundantly caught fish species in the world.

If you’ve ever eaten canned tuna, then there’s a good chance it’s skipjack. Because of its prolific breeding and short lifespan, skipjack stocks are replenished quickly every year, despite the sheer numbers caught. But stocks must be carefully monitored to prevent depletion.

The scientific name of the skipjack is Katsuwonus pelamis. Pelamis appears to be an Ancient Greek word for a young tuna.

The skipjack has dark gray, blue, or purple metallic coloration around the back, fading to silver around the stomach, with four to six dark stripes extending from the tail. Measuring no more than 3 feet long, this is among the smallest of the tuna species. The world record skipjack weighed about 45 pounds.

The skipjack can be found in the Atlantic, Pacific, and Indian Oceans, especially near the equator, at a depth of no more than 850 feet. It seems to prefer areas where warm water mixes with cold, nutrient-rich water.

There are about five major stocks of commercial skipjack populations teeming with millions of fish. It is considered to be a species of least concern.

Due to its abundance, the skipjack is an important part of the marine food chain.

What does the skipjack Tuna eat?

The skipjack consumes squid, crustaceans, and some mackerel or perciform fish. As an opportunistic feeder, its diet varies by region.

What eats the skipjack Tuna?

The skipjack appears to be important prey for certain species of sharks, whales, marlins, and other large fish.

Skipjack can spawn at any time during the year, so it varies by region. Egg production is related to body weight. A particularly large female can produce millions of eggs at a time, releasing them right into the water column. Skipjack can live as long as eight to 12 years in the wild.

Skipjack Tuna in Fishing and Cooking

The skipjack is an important part of the commercial fishing industry. Despite being the smallest of the tuna species, it makes up more than half of the tuna catch. Most are caught near the surface with purse seines or pole-and-line gear. Skipjack makes up about 70% of all canned or pouched tuna. Its light meat is used in all sorts of recipes, including sandwiches, wraps, and even sushi.

The skipjack is a pelagic fish that roams the deep oceans. It has a dark metallic blue or gray back fading to silver around the belly.

Is skipjack good to eat?

The skipjack is high in nutrition and good fats, but not everyone may enjoy the strong taste.

Is albacore or skipjack tuna better?

The skipjack has a strong, fishy taste and a mushy texture, while the albacore has a milder taste and firmer texture.

Is skipjack high in mercury?

The skipjack contains the lowest mercury content of any tuna species, but compared to many other oceanic fish, the mercury levels are still relatively high. It’s a good idea to limit consumption to three servings per week.

Is skipjack good for sushi?

Skipjack is a common ingredient in many sushi recipes, though not as prized as yellowfin and bluefin.

What is the estimated population size of Skipjack Tunas?

There are millions of Skipjack Tunas.

What are some distinguishing features of the Skipjack Tuna?

The Skipjack Tuna has a torpedo-shaped body.

What is another name for the Skipjack Tuna?

What is an interesting fact about the Skipjack Tuna?

The skipjack is the most commonly caught tuna in the world.

How fast is a Skipjack Tuna?

A Skipjack Tuna can travel at speeds of up to 40 miles per hour.