Click through all of our Yellowfin Tuna images in the gallery. 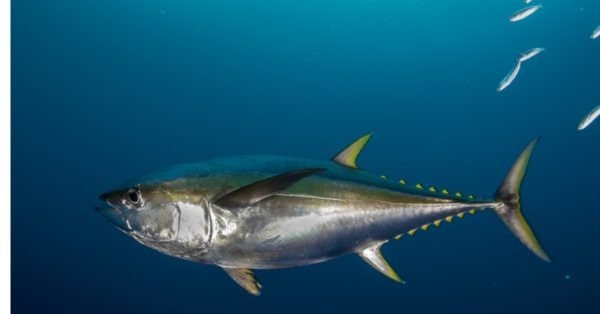 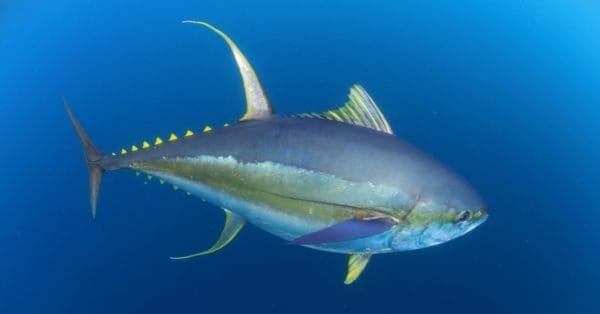 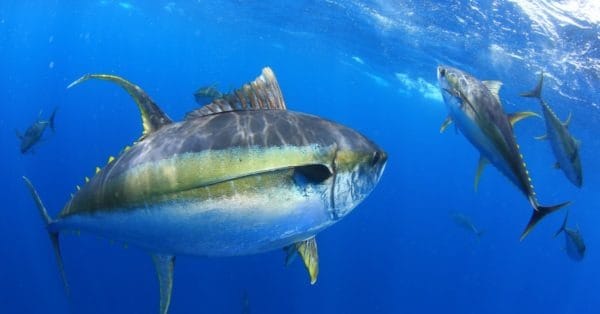 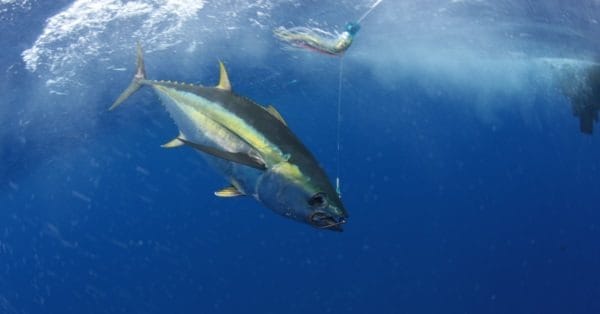 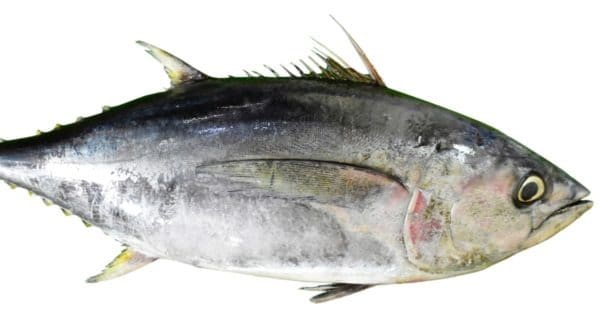 View all of the Yellowfin Tuna images!

The yellowfin is the second most commonly eaten tuna species in the world.

With its yellow coloring and huge secondary fins, this species is unmistakable and easy to recognize.

The scientific name of the yellowfin is Thunnus albacares. This is a combination of two Latin words: albus, meaning white, and caro, meaning flesh. The yellowfin is also known by the alternative Hawaiian name of Ahi.

The yellowfin tuna fish, or Ahi, is characterized by a dark blue back and yellow sides fading to silver around the belly. The most prominent characteristics are the two long, yellow fins jutting out from the back and stomach. Most specimens weigh up to 450 pounds.

The yellowfin tuna fish can be found throughout the Pacific, Atlantic, and Indian Oceans, but several stocks appear to be declining due to overfishing and bycatch. According to the IUCN Red List, this species is near threatened.

The yellowfin is one of the fastest fish in the water, which enables it to evade predators and capture prey.

What does the yellowfin eat?

The yellowfin preys upon squid, crustaceans, and many types of perciform fish.

What eats the yellowfin?

Yellowfin are preyed upon by seabirds, sharks, billfish, false killer whales, and larger tuna. Only the largest predators can consume an adult yellowfin, however. The other predators target the juveniles and eggs.

The yellowfin breeds all year round (with peak spawning season in the summer) by releasing millions of sperm and eggs into the water. The few that survive this initial stage will mature in two to three years and live for about seven or eight years.

Yellowfin in Fishing and Cooking

The yellowfin makes up 30% of the annual tuna stock, second only to the skipjack. They are often pole-caught for sustainability reasons. The yellowfin has a milder flavor and firm texture compared to skipjack, and it can be found for a reasonable price.

View all 4 animals that start with Y

How do you cook yellowfin tuna?

The yellowfin is frequently grilled or made into a steak or salad.

What is the yellowfin tuna?

Can yellowfin tuna be eaten rare?

Yes, yellowfin can be eaten rare, but this has greater health risks compared to well-cooked meat.

Is yellowfin tuna good for you?

Yellowfin is a healthy meal high in good fats and other nutrients, but due to its mercury content, consumption should be limited to only a few servings a week.

How big is a yellowfin tuna?

The yellowfin can grow up to 4 feet long and weigh some 450 pounds.

What is the estimated population size of Yellowfin Tunas?

There are millions of Yellowfin Tunas.

What are some distinguishing features of the Yellowfin Tuna?

The Yellowfin Tuna has a long, yellow-colored secondary fin.

What is another name for the Yellowfin Tuna?

The Yellowfin Tuna is also called the ahi.

What is an interesting fact about the Yellowfin Tuna?

The yellowfin forms schools with other tuna species.

How fast is a Yellowfin Tuna?

A Yellowfin Tuna can travel at speeds of up to 50 miles per hour.