Written by Patrick Sather
Updated: September 3, 2022
Share this post on:
More Great Content:
Are Brown Recluses in California?
10 Spiders in Georgia
Meet The Absolute Largest Spider In History
The Top 10 Biggest Spiders in the…
The Annual Tarantula Migration Is Starting In…
Are Orb Weaver Spiders Poisonous or Dangerous?

When most people think of Michigan, they think of Detroit, Motown, and the Great Lakes. After all, this Great Lakes State touches four of the five Great Lakes. Furthermore, no matter where you are in the state, you’re no more than six miles from an inland lake. It’s this natural beauty that some people love most about the state. Many plants and animals call the state home, from groundhogs to grey wolves. At the same time, Michigan is also home to many species of spiders. Whether it’s orb weavers or wolf spiders, you can find all sorts of spiders in Michigan.

In the state, there are around 500 species of spider. Only three of these species pose a threat to humans: the brown recluse, yellow sac spider, and northern cobweb spider. This article will give you a list of ten spiders in Michigan that live throughout the Great Lakes State.

The brown recluse spider, Loxosceles reclusa, is one of the most feared spiders in Michigan. Its fangs secrete necrotic venom that can cause vomiting, muscle aches, and skin necrosis. Although bites sometimes require medical attention, they rarely result in serious complications.

Adult brown recluse spiders measure between 6 and 20 millimeters long, with females measuring larger than males. They usually appear light brown to dark brown or grey. The cephalothorax normally features a black line on the dorsal side that looks like a violin, with the neck pointing to the spider’s rear. They also go by the name fiddleback spiders, violin spiders, or brown fiddlers due to this marking.

Brown recluse spiders construct asymmetrical webs that they use as silken retreats but not for hunting prey. On the contrary, they leave their webs at night to actively hunt down insects.

Araneus trifolium, or the shamrock orb weaver, is a member of the orb-weaver family Araneidae. You can find these colorful spiders in Michigan as well as throughout much of the United States and Canada.

Adult shamrock orb weavers can grow up to 19 millimeters long, with males measuring smaller than females. They come in a wide range of colors but most commonly appear predominantly beige or brown. Sometimes the abdomen may look pale green, orange, or yellow. Their backs feature characteristic white dots, while the legs look brown or beige with three white bands.

Shamrock orb weavers create webs up to two feet wide that they use to capture prey. They rebuild their webs at night so that they can catch flying insects and other invertebrates. These spiders have a bite that poses no significant threat to humans other than some mild pain or swelling.

The six-spotted fishing spider, Dolomedes triton, is a member of the nursery web spider family Pisauridae. It lives in wetlands and other aquatic habitats throughout Michigan, which is why it also goes by the name “the dock spider.”

Female six-spotted fishing spiders measure between 15 and 20 millimeters long, and males measure from 9 to 13 millimeters long. They typically appear grey or brown and feature two light bands running down each side of the abdomen. Their name comes from the six dark spots located on the dorsal side of the carapace.

Six-spotted fishing spiders can run very quickly, a feat that aids them in capturing prey. They do not use webs to catch insects. Instead, they can run across the surface of water or even dive into the water to catch insects or small fish. Evidence suggests that these spiders can catch fish measuring five times their size.

Mecaphesa asperata is more commonly known as the northern crab spider. A member of the family Thomisidae, it is one of several crab spiders in Michigan. It ranges throughout most of the United States, southern Canada, and Mexico.

Female northern crab spiders measure between 6 and 7 millimeters long, while males measure from 3.5 to 4 millimeters long. Small spines and bristles cover their bodies and legs. They have a brownish-yellow or green cephalothorax with two reddish-brown stripes down the center. Meanwhile, their abdomens appear yellow, white, or pale green with reddish-brown markings.

You can often find northern crab spiders resting on the leaves or petals of flowers in fields, meadows, and gardens. They wait to ambush pollinating insects that come to feed on nectar or pollen. Due to their small size, these spiders pose little threat to humans.

Tigrosa aspersa, or the tiger wolf spider, is a member of the wolf spider family Lycosidae. It goes by other names, including the speckled wolf spider and woodland giant wolf spider, due to its large size, appearance, and preferred habitat. It is one of the more common wolf spiders in Michigan.

Adult tiger wolf spiders can measure up to 25 millimeters long, with females measuring larger than males. You can distinguish these spiders from other wolf spiders thanks to the characteristic narrow yellow line that runs between their eyes. Females appear mostly black, aside from their abdomens which may appear dark grey. Meanwhile, males vary in color from light yellow to tan to beige.

Tiger wolf spiders rely on their swift legs and strength rather than webs to catch prey. Females often carry their egg cases on their spinnerets, and young spiders will ride on their mother’s back upon hatching.

The dimorphic jumper, Maevia inclemens, belongs to the jumping spider family Salticidae. You can find these spiders in Michigan as well as throughout the eastern half of North America.

Females measure from 6.5 to 10 millimeters long, while males measure between 5 and 7 millimeters long. You can identify the females by their white faces and the two red or black lines on their abdomens. On the other hand, males come in two morphs, hence their name dimorphic jumpers. First, a tufted morph with a black body and white legs, and second, a striped morph with black and white striped legs and a grey abdomen with orange markings.

Like other jumping spiders, dimorphic jumpers do not build webs to hunt prey. Instead, these carnivorous hunters rely on their keen eyesight and agility to catch insects. Due to their small size, their bite is not medically significant.

The furrow orb weaver, Larinioides cornutus, also goes by the name “the foliate spider” due to its intricate markings. This spider is the second member of the Araneidae family to make our list of spiders in Michigan. It has a holarctic distribution, which means it ranges throughout the entire northern hemisphere.

Adult female furrow orb weavers measure from 6 to 14 millimeters long, and male furrow orb weavers measure between 5 and 9 millimeters long. Their color varies between black, grey, tan, olive, and red. They possess characteristic arrow-shaped markings on their abdomens. The markings look like a zigzag pattern that resembles the furrow made from a blow, hence their name.

You’ll often find furrow orb weavers resting in their orb-shaped webs. They are nocturnal hunters, and they prey on a wide variety of insects, including flies, gnats, and mosquitoes. While their bite is toxic, it is not threatening to humans.

The giant house spider is actually treated as three separate species; Eratigena atrica, E. duellica, and E. saeva. This spider is a close relative of the common house spider and one of the more frequently encountered spiders in Michigan.

Giant house spiders build messy, flat funnel webs made of non-sticky silk threads. They wait in the funnel for insects to wander inside and then run in for the kill. These spiders are not known to be aggressive, and they rarely bite humans.

The triangulate cobweb spider, Steatoda triangulosa, is a member of the cobweb spider family Theridiidae. It also goes by the name “the triangulate bud spider.” A cosmopolitan species, you can find these spiders in Michigan as well as throughout North America, Russia, New Zealand, and Europe.

Adult females measure between 3 and 6 millimeters long, while males measure slightly smaller. The cephalothorax looks brownish-orange, while the legs appear yellow and are covered in tiny hairs. They get their name from the zigzagging purplish-brown lines that run from front to back on their bulbous abdomens.

Triangulate cobweb spiders construct irregularly-shaped cobwebs made of sticky threads that they use to catch prey. They prey on a wide variety of insects as well as spiders, including brown recluses and hobo spiders. These spiders have a bite that is not medically significant.

The broad-faced sac spider, Trachelas tranquillus, is a member of the ground sac spider family Trachelidae. It ranges throughout the central and eastern United States as well as Canada. During the day, it hides in silken retreats, while at night, you can find it under stones, boards, and leaf litter or crawling on windowsills and siding.

Adult females measure between 7 and 10 millimeters long, and males measure from 5 to 6 millimeters in length. They possess reddish-brown mouthparts and carapaces, while their abdomens vary in appearance, from light grey to yellow.

Unlike most other spiders, broad-faced sac spiders often scavenge for food and will eat dead insects and other spiders. While not normally threatening, their bite can cause pain and may cause a secondary infection. That said, most bites from these spiders are not medically significant.

Spiders are elusive and fascinating creatures, although many of us are scared of them. Find out more about these creepy crawlies:

What black spiders live in Michigan? 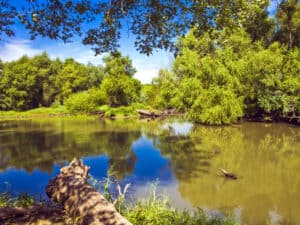 The Annual Tarantula Migration Is Starting In Colorado