Beauty Rat Snakes are relatively harmless if left undisturbed, only attempting to bite out of fear. 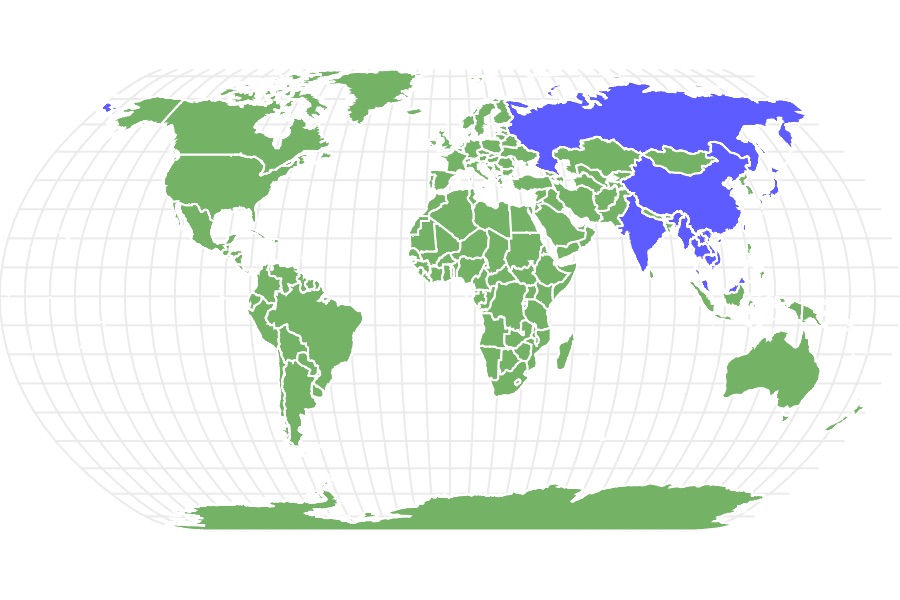 View all of our Beauty rat snake pictures in the gallery.

View all of the Beauty rat snake images!

The beauty rat snake is quite a sight to see, and they are often praised for their ability to eliminate unwanted critters.

They aren’t venomous, but they have a bite that can take out their prey. You won’t find them naturally outside of eastern Asia, but you might be able to purchase them as a pet from a local store. Plus, it has quite a long lifespan if cared for properly.

Where to Find Beauty Rat Snakes

While beauty rat snakes are spread generously through many areas of eastern and southeastern Asia, the specific countries that it is found in will depend entirely on the subspecies. While some snakes of this species are found in Taiwan, others are only found in certain areas of Japanese islands. Most people have no problem finding them on their own property because they act as natural pest control with their proclivity for a rodent-based diet. Due to the pet trade and the market for rat snakes, the beauty rat snake has become an invasive species within this same area.

The beauty rat snake prefers to live in caves, and their climbing skills allow them to glide effortlessly along the walls. They can hunt rats easily with this skill. Rather than staying up at a specific time of day in this habitat, these snakes will hunt at any time of day, regardless of the light.

The beauty rat snake, which is sometimes called the beauty rat snake or cave racer, has the scientific name Orthriophis taeniura, which is Greek. The genus – Orthriophis – comes from a combination of two Greek words – “orthros” (“dawn”) and “ophis” (“snake”). The word “taeniura” is based on two Latin words – “taenia” (“stripe”) and “oura” (“tail”).

Its class is Reptilia, and it belongs to the Colubridae family.

There are multiple variations of the beauty rat snake. In total, there are 10 subspecies, though little is known about all of them. The subspecies include:

While the exact population of beauty rat snakes is unknown, the IUCN sees the species as Vulnerable. The species is invasive to certain areas of Asia, though it is native to other Asia countries. The market for these snakes is broad, threatening the species without adequate protection.

How to Identify a Beauty Rat Snake: Appearance and Description

The beauty rat snake is quite long, reaching nearly 6 feet long among some subspecies. There are even one subspecies that can grow up to 7 or 8 feet long. The biggest one on record was just under 9.2 feet long, named Obi One Kenobi. The body of the beauty rat snake ranges from yellowish-brown to an olive green hue, though the tail is darker than the head. Along the back, you’ll see two pairs of black spots, though the head and neck have no pattern. In a crisp line that starts at the back corner of the eye, the stripe goes all the way across the mouth to the same place on the other side of the head. The mouth instead is a pale cream color.

With so many different species, their coloration can change between the species. The Chinese beauty snake, for example, is usually on the yellow side, but it may be white or albino as well. The Japanese rat snake, however, is completely white, featuring the typical red-eye associated with albino snakes.

How to identify a beauty rat snake:

Beauty Rat Snake: How Dangerous Are They?

While the Beauty Snake is not venomous, that doesn’t mean that they are completely harmless. The hunting technique of this snake involves constricting and biting its prey. Their diet is almost exclusively rodents, and they tend to keep to themselves. Their bite might hurt you, but medical care is minimal (at best).

When it comes to humans, the beauty rat snake is mostly traded as a pet or for its skin. It is rather calm in temperament, making it a great pet and rather harmless to encounter. The snake is primarily bred in captivity if it is sold as a pet. Animals who are captured won’t adjust well to life as a pet.

No. The beauty rat snake is not venomous, but it will still bite a human if threatened. More than likely, they’ll slither away out of fear of getting caught instead as they are rather shit and docile. Their bite is painful as a result of bacteria, but there’s no venom that users have to worry about.

How big do beauty rat snakes get?

The average beauty rat snake can reach a size of 4-6 feet when fully grown.

The only way that anyone should own a beauty snake as a pet is if they already know how to handle them. Most species don’t require much care, though attention to their humidity levels and heat is necessary. They also need the right food, water, light, and housing in their tank to thrive.

How big do Vietnamese blue beauty snakes get?