The albino Japanese rat snake is a symbol of good luck. 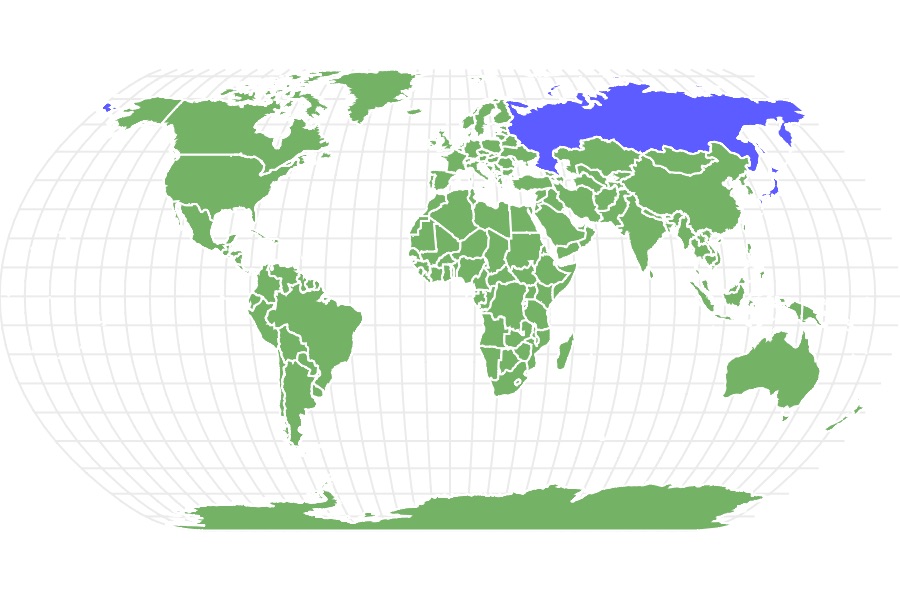 View all of our Japanese rat snake pictures in the gallery.

View all of the Japanese rat snake images!

“The albino Japanese rat snake is a symbol of good luck”

The Japanese rat snake is sometimes called the blue general because some of them have bright blue scales. It is non-venomous and lives in shrubland, forest, or mountain habitat. This snake can grow to a size of 6.5 feet. It lives in Japan and on Kunashir Island. These snakes eat rats, frogs, and lizards.

Where to Find Japanese Rat Snake

The Japanese rat snake lives on the Hokkaido, Honshu, Kyushu, and the Shikoku Islands of Japan. In addition, they live on Kunashir Island.

It lives in a forest habitat where it easily climbs high into the branches to hunt or rest. It’s considered an arboreal snake because it spends so much of its life in the trees. Plus, this reptile’s dark scales allow it to blend in with its leafy surroundings. These snakes can also thrive in shrubland, field, or mountain habitat.

Japanese rat snakes go into brumation for three or four months to avoid the cold weather and store energy for breeding in the summertime.

This snake’s native countries are:

Elaphe climacophora is the scientific name of the Japanese rat snake. In Japan, its name is aodaisho which translates to blue general referring to its bright blue scales. It’s in the Colubridae family and the Reptilia class.

The Different Types of Rat Snake

The Japanese rat snake is one of 17 in the Elaphe genus. Many other types of rat snakes live in the southeastern region of the world. Some examples:

The total number of Japanese rat snakes is unknown, but biologists describe it as common in Japan. However, on Kunashir Island, its numbers are decreasing due to habitat loss. In general, this snake’s population is stable, and it has a status of Least Concern.

How to Identify a Japanese Rat Snake: Appearance and Description

These rat snakes vary in appearance. Some have a mixture of yellow and green scales while others have a combination of bright blue and green scales. Instead of having a defined, splotchy pattern, this snake’s colors blend into one another making it a mixture of different shades. Juvenile Japanese rat snakes have brown striped scales. Both adults and juveniles have a white or cream-colored belly.

As a note, there is an albino type of this snake. It’s all white with pink eyes. Pink eyes are the norm in albino animals. One example is the albino rat. Many of these snakes live in Iwakuni (in Japan) and are known as Iwakuni white snakes.

This snake has a thick body measuring about two inches wide. They range from 3.2 feet in length to 6.5 feet. They have round pupils. The size of this snake differentiates it from others in the region. Outside of Okinawa, it’s known as the biggest Japanese snake.

How to identify this rat snake:

Japanese Rat Snake: How Dangerous Are They?

This rat snake is not venomous. It has a timid temperament. In other words, if this snake is approached by a person or a predator, its first reaction is to escape. Its dark colors give it an advantage in blending in with the leaves and branches in its forest habitat.

But, like most animals, if this snake feels it’s in danger, it can issue a painful bite. The lack of venom makes a bite less dangerous than other types of snakes. If a person is bitten, the first thing to do is stop the bleeding by putting pressure on the wound with a cloth. Once it stops bleeding, it’s necessary to wash the injury with soap and water to prevent it from becoming infected. A clean bandage should be applied to keep dirt and other debris out of the wound until it heals.

If the wound turns bright red or a rash develops, the person should see a doctor for further treatment.

These snakes are a welcome sight to many farmers. They are excellent at capturing rats, mice, and other rodents on a farm or in the fields. An overpopulation of rodents on a farm can eat valuable crops, seeds, and grain.

These rat snakes have a shy temperament. If someone sees one crossing a field or shrubland in search of food, the snake is likely to try to escape to a tree or hide in the brush.

This rat snake is kept as a pet because of its mild temperament.

View all 24 animals that start with J

How do Japanese rat snakes hunt?

These snakes move very quickly, especially when in a tree. They are constrictors, wrapping around a rodent, frog, or other prey. Once the prey is dead, this snake swallows it whole.

No, these snakes are known to have a timid temperament.

Where do Japanese rat snakes live?

The Japanese rat snake lives on the Hokkaido, Honshu, Kyushu, and the Shikoku Islands of Japan. In addition, they live on Kunashir Island.

They have a forest habitat and live in the shrublands, grasslands, and in mountains.

What do Japanese rat snakes eat?

These snakes eat rats, mice, and other rodents along with birds and frogs.

How big do Japanese rat snakes get?

These snakes can grow as long as 6.5 feet! They are strong, muscled snakes with a two-inch wide body.

How do you take care of a Japanese rat snake?

The habitat of this pet snake should also be kept humid. The temperature and humidity can be monitored using portable gauges.

Substrate (bedding), lighting, and the proper food of frozen or live rodents are also essential for this snake.

Someone keeping this snake as a pet should certainly have an enclosure that provides it with plenty of space to accommodate its large size.

How strong is a Japanese rat snake?

These snakes are very strong. It doesn’t just drag its 3.5-to-6.5-foot body along behind it. If you take a bit of time to watch this snake in a video, you’ll see the muscles in every part of its body are at work as it moves along. Because it’s a constrictor, its two-inch-wide body is especially strong giving it the ability to squeeze its prey.