The eastern woodrat mating ritual involves a potentially deadly fight between the male and female before reproduction begins! 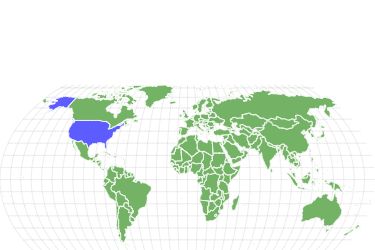 View all of our Eastern Woodrat pictures in the gallery.

View all of the Eastern Woodrat images!

“Despite being a pest to humans, the eastern woodrat plays an important ecological role within its habitat.”

The eastern woodrat, a medium-sized rodent also called the bush rat, is native to the eastern and central United States. It now lives from southern Illinois and the Appalachian Mountains of New York to as far south as central Florida, also stretching from Colorado to Maryland. It is known as a pest to humans and a carrier of parasites and diseases. But its nest provides a home for multiple other species, including insects, frogs, reptiles, and other rodents. Being an herbivore, its waste droppings help spread seeds to maintain the growth cycle of its forest ecosystem. Its droppings also improve soil fertility.

The eastern woodrat’s scientific name is Neotoma floridana. But it is commonly called the bush rat. It is a member of the Cricetidae family of the Mammalia class and Rodentia order. Neotoma is from the Greek term “neos,” meaning new, and “tomos,” meaning cut. “Tomos” refers to the rat’s razor-sharp teeth it uses to cut through plants, nuts, seeds, and bark as part of its herbivore diet. Overall, its name indicates it was a newly discovered mammal with cutting teeth, “floridana” referring to its discovery beneath a Florida tree.

There are eight subspecies of the eastern woodrat. These include:

The eastern woodrat is a medium-sized rodent at about 13.4 to 16.9 inches long. That is about the same length as a ferret or the height of a bowling pin! It typically weighs between 0.47 and 0.73 lbs. Its tail is its most prominent feature, being 5 inches to 7.8 inches of the animal’s total length. The bush rat’s body fur is mostly gray-brown, blending in well with the forest floor, tree bark, rocks, and other surroundings of its natural habitat. But its belly and feet are white. Adult males are typically larger than females.

Eastern woodrats are highly aggressive toward other members of their species, except when mating. But even the mating ritual starts off with a fight that often leads to the death of the male. Because of this aggression, the rats live solitary lives. Each rat builds or finds an existing “house,” a den where they construct one or two nests where they will live throughout their lives.

According to the International Union for the Conservation of Nature (IUCN), the eastern woodrat lives in the U.S. states of Florida, Alabama, Mississippi, Texas, Nebraska, Arkansas, Colorado, Kansas, Louisiana, Georgia, South Carolina, Oklahoma, Missouri, North Carolina, and Illinois. But sometimes the rats are seen in regions as far north as the Appalachian Mountains of New York. Their habitats include forests, wetlands, shrublands, grasslands, rocky outcrops, and caves.

Because hiding from predators is critical for the rats’ survival, they typically nest where they can quickly conceal themselves. They build houses in brush piles, woodpiles, refuse, hollow trees, rocky bluffs, tall vegetation, root clusters, and even abandoned buildings. Within their houses, they build their nests of just about any material they can drag or carry by mouth.

The eastern woodrat is an herbivore. But it makes a tasty meal for many carnivorous predators like owls, spotted skunks, weasels, red foxes, snakes, and raccoons. Snakes, in particular, hunt woodrat pups by invading their dens and plucking the babies from their nests. Because it faces so many threats to its survival, the rat lives a nocturnal life. It forages at night under the cover of darkness and returns to its den to sleep during daylight hours.

Other threats to the eastern woodrat’s survival are disease and parasites. Botflies lay eggs outside the rats’ dens where the eggs easily stick to the rodents’ fur. The eggs hatch in the fur, then the larvae burrow under the rat’s skin for pupation. About one in every five or six woodrats is a carrier of a botfly infestation. Raccoon roundworms are deadly parasites that often infest the rats, as well. In many states, about two in every three eastern woodrats carry roundworms and will die from these parasites.

According to the IUCN, the eastern woodrat’s overall conservation status is of “least concern.” However, its numbers are declining in many areas, much because of human reduction of their natural habitat. Only the Key Largo, Florida subspecies is endangered. Otherwise, there is a healthy population of currently more than 10,000 eastern woodrats living in the wild in the United States.

What eats the eastern woodrat?

The most common predators of the eastern woodrat are owls, snakes, skunks, raccoons and weasels. With so many of these predators in the rat’s habitat, it is no wonder the rodent forages at night and hides in its den during the daytime!

What does the eastern woodrat eat?

The eastern woodrat eats mostly plants, seeds, and nuts. Its diet includes fungi like mushrooms, plant buds, stems, roots, leaves, and fruits, too. The rats forage for their food at night. They eat most of what they find. But they also cache, storing leftover food like squirrels do for the winter and other times when foraging is difficult. In fact, one eastern woodrat can store as much as one bushel of food. That is about 9.5 gallons of plants, seeds, fruits, and other food!

The eastern woodrat is violent and aggressive, particularly to members of its own species! In fact, adult woodrats often chase and kill young rats. Even mating is deadly in many cases. The male and female start their mating ritual with a fight. If the female kills the male in the fight, there will be no reproduction. But if the male wins, he mates with the female.

In warmer climates like Georgia, Texas, and Florida, eastern woodrats mate year-round. In colder climates like Colorado, Illinois, and Nebraska, mating takes place from spring to fall. Once the female is pregnant, she carries the young in her belly for 32 to 38 days’ gestation. The pups are born live in litters of under 6 babies. Most often, litters range between 1 and 3 pups. When the pups are a week old, the female can become pregnant again. Each adult female can bear up to three litters each year after she reaches sexual maturity, typically at five months of age or older.

The eastern woodrat’s babies have closed eyes and little fur when they are born. They have all of their fur and open eyes by the end of their second week of life. Although they wean at about four weeks of age, they do not leave their mother’s house until between 70 and 90 days of life. At about 8 months of age they are fully grown.

There are reports of eastern woodrats having a lifespan of between 6 and 8.6 years in captivity, such as in zoos. But most of these rodents die within 3 years in the wild. Studies have shown only about 10% of the rats have a lifespan past their first year, thanks to parasites, predators, and disease.

There are more than 10,000 eastern woodrats living in their natural habitats in the United States today. Although most of the population is listed as of “least concern” by the IUCN, they are noted to have decreasing numbers. The biggest threat to their survival is human encroachment and destruction of their natural habitat. The IUCN reports all except the Key Largo subspecies of eastern woodrat being widespread and common. The Key Largo woodrat, Neotoma floridana smalli, is endangered.

Eastern woodrats are herbivores. They feed mostly on seeds, nuts, stems, leaves, fruit, flowers, buds, and other plants. They also like fungi, such as mushrooms.

Where do eastern woodrats live?

Eastern woodrats are native to the central and eastern United States. They live as far north as Illinois and the Appalachian mountains of New York. Their habitats stretch from Colorado, Nebraska, and Kansas to Maryland and as far south as the Gulf states and central Florida.

Eastern woodrats are mostly non-threatened and listed as being of “least concern” by the IUCN. That is with the exception of the Key Largo woodrat subspecies, the only one of the rat’s eight subspecies that is listed as endangered by the IUCN.

Is an eastern woodrat a rat?

As a member of the Rodentia Order and with the appearance of a typical rat, the eastern woodrat is indeed a rat. It has all of the common features of rats, such as rounded ears, a tapered snout, rounded body, and a long tail. It is a type of pack rat that lives mostly outdoors in a forest, wetland, shrubland, grassland, cave, or rocky habitat. But sometimes these rats make their houses in abandoned buildings.