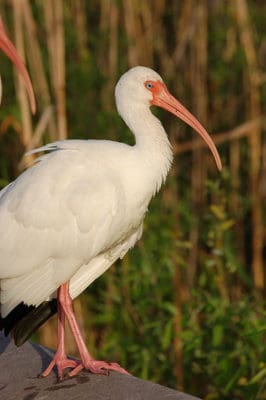 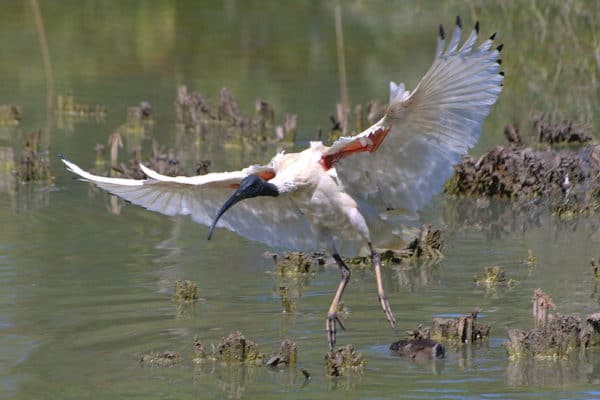 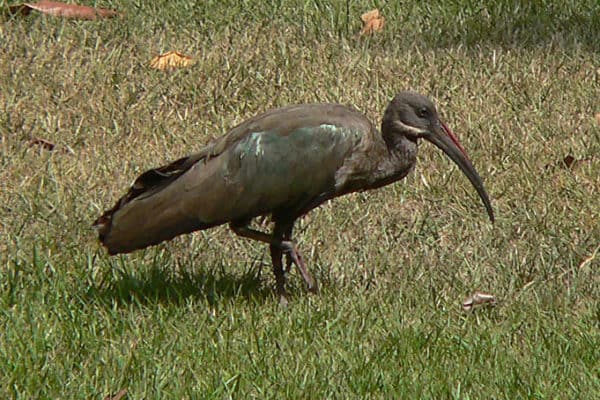 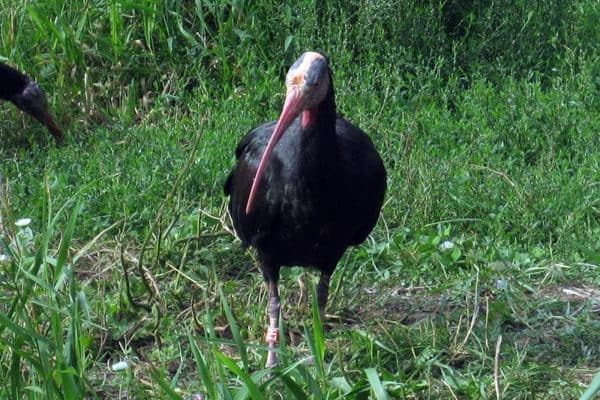 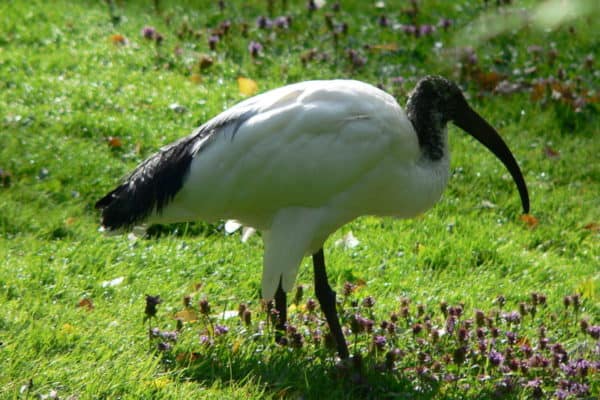 The sacred ibis was venerated by Ancient Egyptians, but no species of the bird currently inhabits modern Egypt.

With species found across all continents minus Antarctica, the ibis animal, a type of bird, is one of the best-known wading birds in the world. Nearly 30 different species are currently extant, and they vary considerably in terms of size, coloring, and other variables. A few species of ibis are now extinct, and several species are classified as endangered.

The ibis animal belongs to the class Aves, the order Pelecaniformes, and the family Threskiornithidae. They are further subclassified into 12 different genera, and 28 extant species of the bird are found across them. The term “ibis” was the traditional word that was used for this group of birds in both Latin and Ancient Greek. The word “ibis” is also related to the Egyptian term “hab,” which means “sacred bird.”

Ibises vary by appearance from one species to the next. However, these wading birds tend to average between 22 and 30 inches in length. The largest species, the giant ibis, averages more than three feet in length and weighs an average of 10 pounds. Female ibises tend to be smaller than males, typically weighing about 10 ounces less and possessing smaller bills and shorter wings.

Despite variations in appearance across species, all ibis animals have football-shaped bodies and long legs and toes. Their long, down-curved bills are used to probe mud and water for food. Interestingly, baby ibises’ bills are straight at birth and start curving downward around 14 days after birth.

Ibises vary in color from species to species, and their coloring is also determined by their dietary habits and habitat. For example, the scarlet ibis’s bright pink coloring comes from the fact that it consumes large volumes of shrimp. Most ibises have bald heads or faces, and the underlying skin turns bright red during breeding season.

These wading birds’ bills are specially designed to help them to probe the ground for food. Their nostrils are located at the base of the bill instead of the tip, which allows them to keep breathing while probing. They also use sensitive feelers within their bills to identify food that they find, eliminating the need to drop the food and look at it first.

Most species of ibis are typically silent. However, during breeding season, they may wheeze, squeak, or breathe loudly to make their presence known. Female ibises also sometimes use a special sound to summon their young.

Social birds, ibises typically live together in large flocks. Primarily active during the day, flocks of ibises spend the daylight hours feeding, resting, and preening. All extant species of the bird are capable of flight, and they fly together in flocks from roosting sites to feeding sites and back again. They sometimes fly in straight-line formations and sometimes in V-shaped formations. Incredibly, ibises in flight beat their wings in unison and even transition between flapping and gliding at the same time. While in flight, ibises keep their necks and legs extended, alternating between flapping and sailing.

Ibises build compact nests, usually out of sticks, in low areas of bushes and trees. Some species even build them up on steep cliffs. They nest together in large groups that can consist of hundreds to thousands of breeding pairs.

During the breeding season, which varies by species and habitat, individual flocks of ibises converge to form massive colonies. Some species of ibis mate with the same partner from year to year while others mate with new partners every year. Both parents prepare the nest for eggs. Females typically lay three to five eggs per season and the incubation period averages between three to four weeks. During this time, both parents take turns incubating the eggs.

After hatching, the chicks usually have brown, gray, or black down. Both parents take turns feeding the chicks by letting each chick reaches its head inside the parent’s mouth and retrieves regurgitated food. Ibis chicks fledge at anywhere from 28 to 56 days on average, and they become fully independent anywhere from one to four weeks after that. However, some species of ibis stay with their parents for much longer to learn the finer points of things like migration patterns and feeding strategies.

These birds are found in all warm (typically tropical to subtropical) regions of the world except for the islands of the South Pacific. They are most commonly found in wetlands, but they are also found in farmlands, open meadows, grasslands, and forested areas. Although most ibis habitats are found at sea level, some ibis are located in mountainous regions.

Three species of ibis are commonly found in North America: the glossy ibis, Plegadis falcinellusPlegadis chihiEudocimus albus. Some, like the hadada ibis, are found in Africa. Others, like the hermit ibis, Geronticus eremita, are found in North Africa and the Middle East. One species called the straw-necked ibis, Threskiornis spinicollis, is found only in Australia. The sacred ibis, Threskiornis aethiopica, was revered in Ancient Egypt. Today, the species is no longer found in Egypt, but is located primarily in Southern Arabia and in Sub-Saharan Africa.

These birds are opportunistic feeders, which means that they will eat just about anything that they come across as long as it is edible. For the most part, however, they tend to be more carnivorous and subsist primarily off of insect larvae, worms, shrimp, beetles, grasshoppers, small fish, and soft crustaceans. Occasionally, these birds may consume algae and aquatic plants too, but those organisms rarely make up much of their diet.

Most ibis species are widespread and abundant in many parts of the world. However, some are considered to be endangered. The hermit ibis of Northern Africa and the Middle East, for example, is classified as endangered by the International Union for the Conservation of Nature (IUCN). Once found across central and southern Europe, Algeria, and Turkey, this species is now only found in Turkey and Morocco. Another endangered species of ibis called the Japanese or crested ibis, Nipponia nippon, was at the verge of extinction near the end of the 20th century. Several species are also listed as facing critical risk, including the giant ibis, the dwarf olive ibis, the Waldrapp or northern bald ibis, and the white-shouldered ibis.

There are 28 extant, or currently existing, species of ibis across the world. Six species have gone extinct, including two that were flightless birds – apteribis of the Hawaiian islands and xenicibis of Jamaica, which had club-like wings.

Ibises face various predators depending on their habitat. Common predators of the ibis include birds of prey, monkeys, crows, snakes, and iguanas. Factors that may negatively impact population levels include intense hunting; drainage of wetland habitats; use of pesticides; and commercial logging of nesting sites. Ibis eggs and ibis chicks also often fall out of nests.

On average, ibises live for anywhere from 16 to 27 years. The oldest recorded white ibis to be found in the wild was at least 16 years and four months old. Located in Florida in 1972, the bird had been banded in Alabama in 1956.

Breeding season varies by species, geographic location, and other factors. When it is time to breed, individual ibis flocks come together to form huge breeding colonies. During breeding season, these normally silent birds become a lot noisier. They emit sounds like wheezes and squeaks to attract attention from potential mates. Some ibis species mate with the same partner from year to year while others mate with different partners every year.

The male and female ibis work together to prepare the nest for eggs using reeds, twigs, and grass. When the eggs arrive – usually anywhere from three to five are laid per season – both parents take turns incubating them. The incubation period lasts for anywhere from three to four weeks. Chicks are then cared for by both parents. The male or female ibis consumes food and then regurgitates it into its mouth. The chick then reaches its head into the parent’s mouth to retrieve the food.

Ibis chicks begin fledging (developed enough for flight) anywhere from 28 to 56 days after being born. It then typically takes another one to four weeks for the birds to become completely independent of their parents. However, some species of ibis remain with their parents for even longer periods of time.

Population levels for most species of ibis have held steady. However, some species have become endangered, and the primary culprit is the loss of habitat. Commercial logging activities eliminate nesting sites, causing population levels to drop. Wetland habitats are often drained for human habitation, eliminating safe areas for ibises to flourish. The birds are also intensely hunted in some areas, and their eggs may also be negatively impacted by the widespread use of pesticides.

Efforts have been made to improve ibis population levels for threatened species. For example, the Waldrapp ibis, or bald ibis, was once classified as critically endangered by the IUCN. Thanks mostly to successful captive breeding programs, this species is now listed as endangered.

View all 14 animals that start with I

What kind of animal is an ibis?

The ibis animal is a type of wading bird that can be found in warm climates across the globe. It belongs to the same family as the spoonbill and is closely related to the stork. Although a few extinct species of the ibis were flightless, all extant species of the bird are capable of flying.

What do ibises eat - are they carnivores, herbivores, or omnivores?

Ibises use their long, down-curved bills to feed on small fish, soft mollusks, and other food items that it finds in the ground. They primarily search for food in the water or in the mud, but they also probe their bills into cracks in the ground and into other places. Ibises are not picky eaters and will opportunistically consume pretty much anything they find. In general, however, they are carnivores whose diet consists mostly of worms, spiders, small fish, crustaceans, beetles, grasshoppers, and insect larvae. They may also consume algae and aquatic plants in limited quantities.

Where does the ibis live?

These wading birds are found in tropical and subtropical climates across the world. With the exception of Antarctica and the islands of the South Pacific, species of ibis are found primarily in wetland settings across all continents. Three species are commonly found in North America. Although usually found in wetlands, ibises are also found in open meadows, grasslands, forests, and farmlands. The majority are found at sea level, but some species live in mountainous areas. These birds are almost always located near the water.

Can an ibis fly?

All extant species of ibis can fly. Two extinct genera were flightless, however. Ibises usually fly together in straight or V-shaped formations. They beat their wings simultaneously when doing so.

Are there ibises in the United States?

Three of the 28 species of ibis are commonly found in North America. In the United States, the white ibis is the best-known and most widespread species, but the glossy ibis and the white-faced ibis are fairly numerous too. They are primarily found in the southern and central states.

What is the symbolism of the ibis?

A species of ibis, the sacred ibis, was revered by ancient Egyptians. The bird was associated with the deity Thoth. However, it is no longer found in Egypt.