Members of the pit viper family, Cottonmouth snakes are native to the United States. They are well known for being comfortable in aquatic environment as they are on the land. When threatened the cottonmouths open their mouth wide to display the white insides of their mouth. They also have heat sensing facial pit that helps them detect even minute difference in temperature, this becomes useful when the need to strike a prey accurately. It is also a known fact that cottonmouths usually don’t attack humans unless they are provoked.

Have you ever wondered about the cottonmouth population by state and which states have them? We’ve pulled together the information to compile this list showing all the states where these snakes live.

Sometimes called the water moccasin, this aquatic snake gets its name from a white mouth that makes it look like it’s eating a cotton ball. Although these snakes have a reputation for being aggressive to humans, studies have found that their first defense is to run rather than fight. They are highly venomous, but there are few reported cases of death from their bites.

Where do cottonmouths live?

They are native to the United States. Most cottonmouths live in the southeastern states, but their range extends to Texas, southern Illinois, and even parts of Indiana. They primarily live in slow-moving streams, wetlands, swamps, marshes, and ponds. The cottonmouth is the only semiaquatic pit viper in the world.

An adult cottonmouth’s size can range from 2-4 feet long and 3-4 pounds in weight. Its thick body consists of ridged scales that are gray, tan, olive, or dark brown with a dozen or more dark crossbands that may or may not be visible. The patterns darken with age to the point that an older cottonmouth may appear completely black. Their heads are diamond shaped, their pupils are like cat’s eyes, and they have the classic white mouth.

What do cottonmouths eat?

Cottonmouths are predators and carnivores, and as they live both in the water and land they hunt in both environments. Their diet includes fish, turtles, small snakes, rodents, baby alligators, crayfish, and insects. They strike their prey with a precise venomous strike, injecting them with venom, then wrap themselves around their food until it is completely incapacitated and then they swallow it whole.

What are a cottonmouth’s predators?

The region of the United States where cottonmouths are primarily found offers food and habitat for the venomous snake, but also plenty of threats. This snake can become a meal for turtles, alligators, other snakes, and birds. It is also hunted by small mammals such as cats, dogs, and pigs. But the greatest and most frequent adversary of the cottonmouth is the opossum. These marsupials have shown a great appetite for the snake and an immunity to its venom, which make them a major cottonmouth predator.

What is the cottonmouth population in the United States?

While their exact population is unknown, cottonmouths are not currently listed as threatened or endangered. They are categorized as “least concern” on the International Union for the Conservation of Nature (IUCN) Red List of Threatened Species.

However, the IUCN includes the annotation, “Needs Updating,” on its assessment of this snake. It last assessed the species in 2007, and there may have been changes to the snake’s status. Many individual states have reported drops in snake populations, and some have already classified specific snakes as threatened or endangered.

Which states have cottonmouth snakes?

Here’s a definitive state-by-state guide. Our list uses facts and figures from state wildlife agencies, departments of natural resources, and other reliable sources.

These species are found all over, but most of them live in the state’s Coastal Plains swamps. Their population in the state is described as “least concern: for conservation status.

Alaska doesn’t have any snakes.

Arizona has 19 species of venomous snakes, but it does not have any cottonmouths.

Arkansas is home to the western cottonmouth. According to the state’s Game and Fish Commission, it is illegal to kill any snake unless it presents a “reasonable threat or endangerment” to people or property.

There are no cottonmouths in California. The state has a healthy mix of many other snakes, but its venomous snakes are all rattlers.

Colorado has no cottonmouths. All the state’s venomous snakes are members of the rattlesnake family.

There are none in Connecticut.

Delaware has no cottonmouths. The state’s venomous snakes are the northern copperhead and timber rattler.

The eastern cottonmouth and Florida cottonmouth call Florida home. Wildlife officials say they live in ponds, lakes, rivers, cypress swamps, and wet prairies. They are found all over the state.

The state is home to the western cottonmouth. The snakes here shy away from the large, open waters of the northern part of the state. They are concentrated in slow-moving streams, swamps, and backwaters of the southern region.

Hawaii doesn’t have any native snakes. It only has one introduced snake species.

There are none in Idaho.

Illinois is home to the western cottonmouth. According to state officials, the snake occurs only in the extreme southern part of the state. They note that the snakes are highly venomous but also say, “Most snakebites in the United States involve people working with them in captivity.”

The western cottonmouth is considered endangered in Indiana. According to the state’s Department of Natural Resources, it is only found in one small area in the southwest region of the state.

Iowa does not have any members of this species.

There are no cottonmouths in Kansas.

The western cottonmouth is native to Kentucky. According to the state’s Department of Fish and Wildlife Resources, the snakes live in the swamps, wetlands, and floodplains of western Kentucky. There have been no sightings in the state’s central or eastern regions.

Western cottonmouths are among Louisiana’s many snakes. They cause the largest number of venomous snake bites in the state. This is probably because they tend to live in areas frequented by fishers and hunters.

There are no venomous snakes in Maine.

There are no cottonmouths in Maryland. The state only has two venomous snakes: the northern copperhead and the timber rattlesnake. Under the Nongame and Endangered Species Act of Maryland, it is illegal to kill any snake.

Massachusetts has no cottonmouths.

Michigan has only one venomous snake species, and it’s a rattlesnake. The eastern massasauga is a shy, secretive snake that lives in wetlands and forests.

There are no cottonmouths in Minnesota.

According to the Mississippi Wildlife, Fisheries, and Parks Department, the snakes live in creeks, swamps, bayous, and coastal marshes all over the state. These snakes are also the top cause of snakebites in the state.

Missouri has the western cottonmouth. Under the Missouri Wildlife Code, it is “unlawful to kill, harm, or harass” any snake.

There are no cottonmouths in Montana.

You can find rattlers and copperheads in Nebraska, but you won’t find any cottonmouths.

Nevada has many intriguing reptiles, but it has no cottonmouths.

There are none in New Hampshire.

New Jersey has no cottonmouth snakes.

Of New Mexico’s 10 venomous species, all but one, the Sonoran coral snake, is a rattler, and none are cottonmouths. Like Arizona and Texas, New Mexico has the hot, dry climate these rattlers prefer.

The state has only two venomous snake species, and neither is a cottonmouth.

This state is home to the eastern cottonmouth. According to the North Carolina Wildlife Resources Commission, the snakes are “relatively common occupants of North Carolina’s wetlands, and they are often observed basking during the day and foraging at night by human visitors to these ecosystems.”

North Dakota has no members of this species.

The state has no snakes of this species.

The western cottonmouth is one of many snakes native to Oklahoma. These snakes are more likely to be seen during scorching summer days.

The state has no cottonmouths.

The state’s Department of Natural Resources says the population of these snakes is stable.

There are none in South Dakota.

The state is home to the western cottonmouth. The state’s Wildlife Resources Agency says, “The aggressive nature projected onto cottonmouths is greatly exaggerated. These snakes generally try to escape if encountered.” The snakes largely inhabit the swamps, wetlands, and drainage ditches of coastal plains.

The western cottonmouth is among Texas’s many snake species. The Texas Parks and Wildlife Division reports that this species is only responsible for 7% of snakebites in Texas.

There are no cottonmouths in Utah.

The timber rattlesnake is the state’s only venomous species. It is endangered, and state officials have asked people to report sightings of it in Vermont.

The eastern cottonmouth is a Virginia native. The Virginia Department of Wildlife Resources states that the snakes only live south of the James River, and none have been sighted in the northern part of the state.

There are none in Washington.

The Mountain State has two venomous snake species, but it has no cottonmouths.

There are none in Wisconsin.

Wyoming has no cottonmouths.

With over 3,000 species on the planet, snakes offer us a world of knowledge to explore. There is more slithering snake action below. 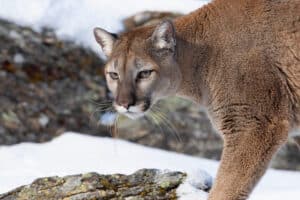