iStock.com/EJ_Rodriquez
Share this post on:
More Great Content:
Are There Any Plants That REALLY Keep…
What Plants Keep Copperhead Snakes Away?
Are Geraniums Poisonous To Dogs or Cats?
Are Lilies Poisonous To Dogs Or Cats?
Daisy vs Chamomile: How to Tell These…
What Do Plants Eat? Their Diet Explained

Spanning an immense 268,596 miles, Texas is the second largest state in the United States.  It has a vast range of ecosystems which is home to many thousands of animals.  However, just as important as the animals are the plants and trees that make up these habitats.  Although Texas has many native plants there are also many others that are not native and some of these can be very damaging to other plants and to animals.  These are known as being invasive and there are 37 species of plants invading Texas.  These range from aquatic plants to climbing vines to huge trees.  So join us as we discover some of the invasive plants in Texas!

Alliaria petiolata – known as garlic mustard – is a member of the mustard family that is native to Europe, China, Pakistan, Africa, and Asia. Garlic mustard is best known for the strong garlic-like odor that it produces. Although initially appearing as green leaves close to the ground, garlic mustard becomes around 3 feet tall with triangular and heart-shaped leaves and clusters of small white flowers. Young garlic mustard plants contain cyanide at levels that are toxic to most native herbivorous animals which is only one problem that that plant causes. The mature plant provides no benefits to native wildlife either, while also causing problems for native plants. Garlic mustard is one of the most dominant invasive plants in deciduous forests and affects the population of many native plants.

Although native to Eurasia, curly pondweed is an aquatic plant that is an invasive species in North America. It was originally introduced to the Great Lakes and subsequently spread from there. Curly pondweed (Potamogeton crispus) gets its name from the shape of its leaves which are oblong-shaped and have wavy edges. The leaves are always submerged under the water and are usually bright green, although they may be brown later in the year. Curly pondweed typically grows in slow-moving water – such as lakes, ponds, and ditches. Curly pondweed is invasive as it competes with (and pushes out) native plant species as well as clogging up the waterways. When curly pondweed begins to die off, the decomposing plant causes the oxygen levels in the water to drop. This can lead to the death of animals in the water, such as fish.

One of the most invasive plants in Texas is Alternanthera philoxeroides – commonly known as alligator weed. Alligator weed is native to South America but is invasive in the United States and around 30 other countries. In Texas, it is illegal to possess or transport alligator weed, such is its invasive nature. Although alligator weed grows both on land and in water, it tends to be introduced to new countries by becoming stuck on ships traveling from South America. Alligator weed is distinguished by white flowers on short stalks and it has horizontal stems which can reach up to 33 feet long.

Alligator weed has a massive impact on several different aspects of the environment. As it tends to form in large clusters, it overpowers native plant species by competing for sunlight and space. Due to this, populations of native plants decline, which in turn causes populations of native animals to decline as their food source and habitats begin to dwindle. Not only that, but as alligator weed is so dense, it disrupts and restricts the natural flow of water which can change habitats and ecosystems negatively.

Commonly known as bushkiller, Causonis japonica is a type of vine that is native to Australia and Asia. Bushkiller has green leaves which all have five leaflets with the longest in the center of the arrangement. It develops small pink, white, or yellow flowers from June through to August. As the name suggests, bushkiller competes with many native plant species and eventually kills them. Bushkiller tends to attach itself to plants and trees and grows rapidly in a thick mass. By doing this, it almost completely blocks out the sunlight to the plant which subsequently dies. Bushkiller grows in many habitats and can attach itself to virtually any host plant, therefore putting many forests and fields at risk.

Originating in Japan and Taiwan, paper mulberry was initially introduced to the US as a shade tree but has quickly spread across the country. Paper mulberry (Broussonetia papyrifera) is a deciduous tree with rough-textured leaves that are 3 to 10 inches long and vary in shape. The tree is 33 to 66 feet tall and has both male and female flowers which are on separate plants. It produces reddish-purple and orange fruit. Paper mulberry is one of the quickest growing trees and spreads quickly – usually by wildlife, which feeds on the fruit. It thrives in forests and field edges and quickly pushes out native plants. However, as it has a shallow root system, paper mulberry is easily blown over by high winds.

As a huge aggressive plant, giant hogweed is one of the most invasive plants in Texas. Giant hogweed (Heracleum mantegazzianum) is a member of the carrot family and is native to parts of Eurasia. Giant hogweed can reach the dizzy heights of between 6 and 20 feet and is distinguished by its hollow stems which have reddish-purple blotches and white hairs. Its foliage tends to be umbrella-shaped and it has large white flowers. Giant hogweed can be incredibly dangerous as its sap is phototoxic. Any contact with sap causes our skin to become unable to protect itself from the sun. This leads to serious skin irritation that causes painful blisters to appear on the skin which subsequently scars.

Native to China and Taiwan, Chinese tallow trees actually have many uses as they are used for biodiesel production and their seeds are used in candle making. However, Chinese tallow trees (Triadica sebifera) are also incredibly invasive in the US. They are deciduous trees with waxy green leaves and yellow and white flowers which occur in spike-shaped arrangements. The sap and leaves are toxic, while their decaying leaves are toxic to native plants. Additionally, Chinese tallow trees grow and reproduce quickly, with one tree capable of producing up to 100,000 seeds per year. Their quick growth rate coupled with their rapid spread means that they quickly out-compete many native plants and trees. This causes a monoculture whereby they are the only trees remaining within that area.

Sorghum halepense – commonly known as Johnson grass – is a species of grass that is native to Africa and Asia but has been introduced everywhere else except Antarctica. Johnson grass spreads rapidly, is fast-growing, and is quickly able to reach 7 feet tall. While it out-competes many crops which have been planted by farmers, the real danger is to livestock. This is because Johnson grass causes bloat in animals such as sheep and cattle due to excess amounts of nitrate. However, when the grass wilts due to frost or hot, dry weather it contains hydrogen cyanide. This quickly kills horses, sheep, and cows when they eat it.

The most invasive plant in Texas is widely regarded to be giant salvinia.  Giant salvinia (Salvinia molesta) is an aquatic plant that is native to Brazil. It is a free-floating fern and does not hold any attachment to the ground, instead floating in slow-moving water such as streams, ponds, and marshes. Giant salvinia can eventually form a thick mass that is up to two feet thick. This clogs the waterways, disrupts the flow of water, and stops recreational activity in the water. It also blocks the sunlight to native plants and prevents the exchange of gas between the water and the air. This causes the water to become stagnant. Giant salvinia also causes the oxygen levels in the water to drop when it dies and decomposes. It even causes problems for animals that become trapped underneath and for birds that don’t recognize or stop at the water source. 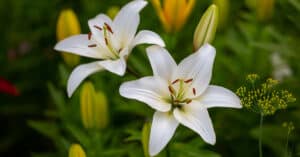 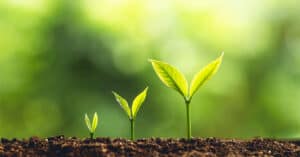 What Do Plants Eat? Their Diet Explained

What Do Plants Eat? Their Diet Explained