A buzzard in flight is able to hear a mouse moving in the grass. Click through all of our Common Buzzard images in the gallery. 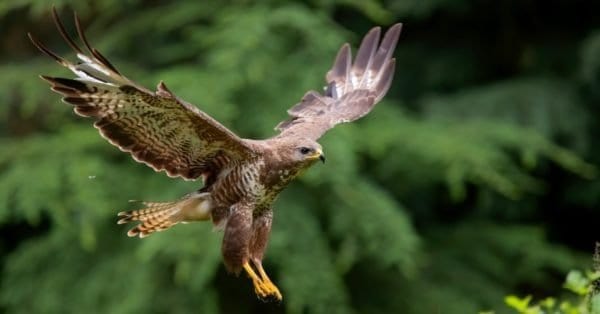 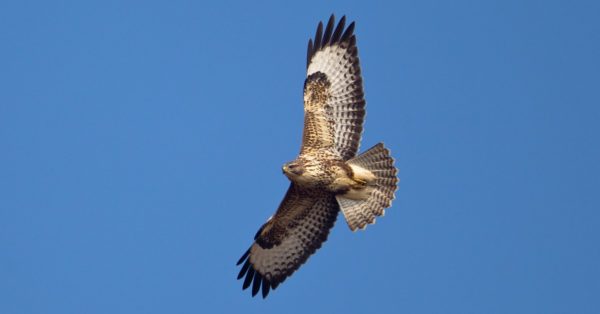 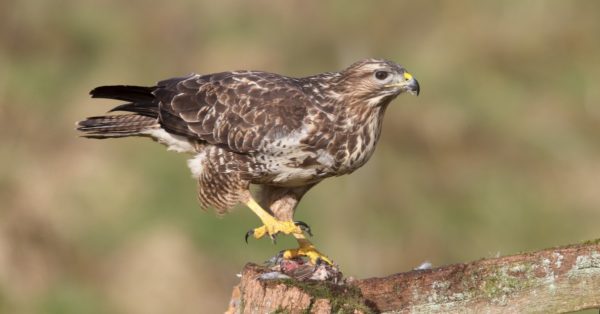 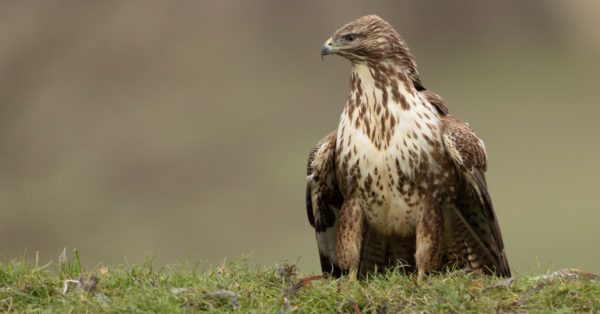 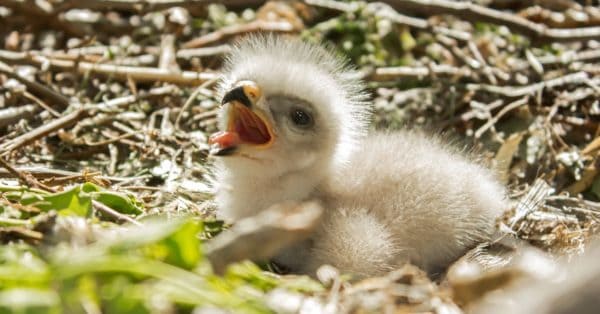 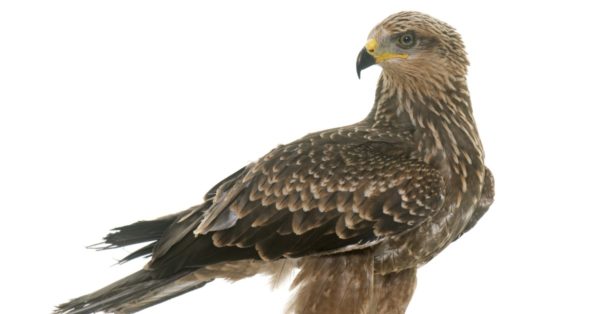 View all of the Common Buzzard images!

“Common buzzards can fly up to 28mph.”

Common buzzards live in Europe, Africa, and Asia. They are carnivores eating other birds, reptiles, rodents, and sometimes dead animals. Though they are mostly solitary, these birds sometimes form groups or flocks. They are monogamous.

Where to Find a Common Buzzard

This buzzard is found throughout Europe including the countries of Scotland, Ireland, France, Greece, and England along with many others. Also, they are found in Asia in countries such as Russia, China, India, and Mongolia. Common buzzards that live in colder areas migrate to South Africa for the winter months.

Their habitat includes woodlands, scrubs, marsh bogs, farmlands and even around cities and towns occupied by lots of people.

These birds live in temperate climates.

These buzzards can be seen year-round in Scotland, Wales, and throughout England. They are especially active in the springtime. Bird watchers are likely to see them perched on street lights, fence posts, and in trees overlooking open fields or pastures. They can be seen soaring over fields and hillsides in search of prey as well.

These buzzards build a thick, bulky nest with sticks, branches, and twigs. These birds use heather or leaves to line the inside of the nest. Many nests are built in trees near the trunk or in a strong fork of branches. They can be from 10 to 80 feet off the ground. Other common buzzards build nests on rocky cliffs. Since these birds use the same nest every year, the nest can change size and shape with repair work over time.

Buteo buteo is the scientific name of this buzzard. The word buteo is Latin meaning hawk. This bird is sometimes called the tourist eagle because tourists in Europe often mistake it for an eagle.

It belongs to the Accipitridae family and the class Aves.

There are 28 subspecies of common buzzard. Some of them include:

The feathers of the bird are a mixture of dark brown, light brown, and white. They are medium to large in size with dark eyes and a hooked beak. They are 15 to 22 inches in length and weigh 1 to 3 pounds. One of the most interesting facts is the males usually weigh less than females. This makes them better fliers. The wingspan of this bird ranges from 42-53 inches.

Alternatively, in Europe, this buzzard is not referred to as a vulture. It’s called a hawk.

The diet is different for these two birds. A vulture’s main diet is carrion. A common buzzard hunts rodents, reptiles, and other birds and will eat carrion as well.

Common buzzards and vultures have different types of feet. The buzzards have strong talons made for grabbing prey and carrying it. Vultures have feet that are considered weak.

Look at these birds and you’ll notice a big difference. A vulture has no feathers on its neck whereas the buzzard has thick feathers.

One of the main differences between common buzzards and hawks is their size. Hawks are smaller and lighter than buzzards.

Buzzards and hawks both hunt for rodents, birds, and small reptiles. However, hawks are more likely to capture prey than eat carrion. Carrion is a part of a buzzard’s diet.

This bird is known as a partial migrant. This means there are differences in the migratory habits of individual buzzards in different regions. Some migrate further south than others due to the weather conditions where they live. Some buzzards migrate just a short distance until they are in a region that’s warmer with more prey to consume over the winter.

The steppe buzzard is one species that migrates an especially long distance for the winter months. In September and October, steppe buzzards begin making their way from Asia minor to the Cape of Africa. They migrate again beginning in March to return to their breeding grounds.

These buzzards are carnivores. They spend the bulk of the day by themselves looking for prey.

Common Buzzard: What do the birds eat?

The buzzards eat rodents such as voles and mice, snakes, reptiles including lizards, insects, and carrion. These raptors make the most of whatever food source is in the area!

Though a common buzzard is a bird of prey, it does have some predators.

Eagles, wildcats, and foxes are all predators of this bird. Foxes and wildcats may capture a bird by sneaking up on it as it eats carrion. Eagles are larger than these birds and can overpower them.

Humans can be a threat to these birds as well. Sometimes in order to get rid of a fox in the area, people will set out poisoned traps. The buzzards may consume this poison.

Habitat loss due to deforestation is another threat.

Despite all of these threats, the official conservation status of the common buzzard is Least Concern with a stable population.

The breeding season of this bird runs from March to May. A male attracts a female by flying in circles and diving. These birds are monogamous.

The female lays 2-4 eggs that hatch in 33-38 days. Newborn buzzards are known as chicks. The male hunts for food for both the female and the chicks. The chicks begin to get a full layer of feathers at 50 to 60 days old. After 14-16 weeks in the nest, the chicks are strong enough to live on their own.

Common buzzards reach sexual maturity at 3 years old. One of the most incredible facts about this bird is its lifespan goes up to 25 years.

The conservation status of this bird is Least Concern with a stable population.

Does a common buzzard migrate?

Yes. However, some species migrate for longer distances than others.
Steppe buzzards migrate a long distance, flying hundreds of miles per day from Asia minor to the Cape of Africa in September and October. Then, they fly back to their breeding grounds in March and April.

How many eggs does a common buzzard lay?

How fast does a common buzzard fly?

What is a common buzzard’s wingspan?

When do common buzzards leave the nest?

Is a common buzzard a carnivore?

Yes, this bird is a carnivore.

Where do common buzzards live?

Common buzzards live throughout Europe, parts of Asia including China, India, and Russia as well as in South Africa. As a note, India has three Buteo species.

Their habitats include grasslands, farmlands, woodlands, marsh bogs, and scrubs. They also live around people in cities and towns.

Is a common buzzard a hawk?

A buzzard is a type of hawk.

What does a common buzzard eat?

How do you identify a common buzzard?

A common buzzard has a mixture of white and brown feathers. It has a hooked beak and is commonly seen flying over wide-open pastures or fields. It has rounded wings that form a V-shape. This bird has a short, bulky body.

What Kingdom do Common Buzzards belong to?

What phylum to Common Buzzards belong to?

What phylum to Common Buzzards belong to?

What family do Common Buzzards belong to?

What order do Common Buzzards belong to?

What genus do Common Buzzards belong to?

What type of covering do Common Buzzards have?

Common Buzzards are covered in Feathers.

What are some predators of Common Buzzards?

Predators of Common Buzzards include foxes, eagles, and wildcats.

What are some distinguishing features of Common Buzzards?

What is an interesting fact about Common Buzzards?

The Common Buzzard is the most common raptor in the UK!

What is the scientific name for the Common Buzzard?

The scientific name for the Common Buzzard is Buteo buteo.

What is the lifespan of a Common Buzzard?

Common Buzzards can live for 12 to 20 years.

What is the lifespan of a Common Buzzard?

Common Buzzards can live for 12 to 20 years.

How to say Common Buzzard in ...