Click through all of our Peregrine Falcon images in the gallery. 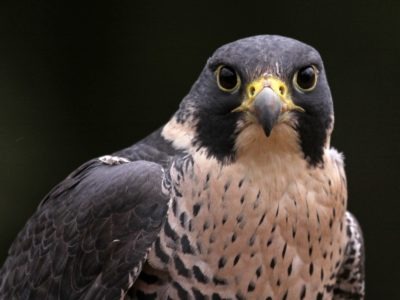 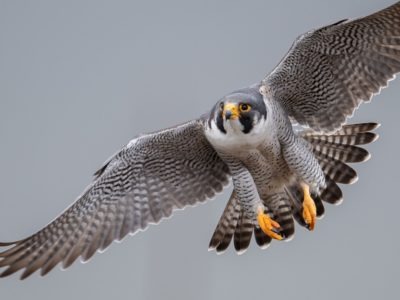 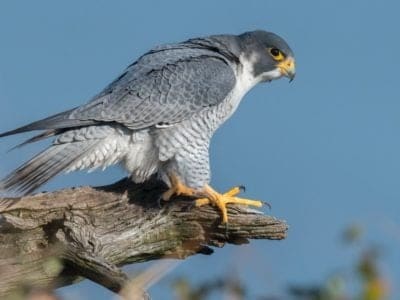 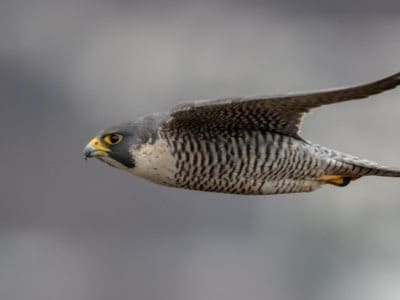 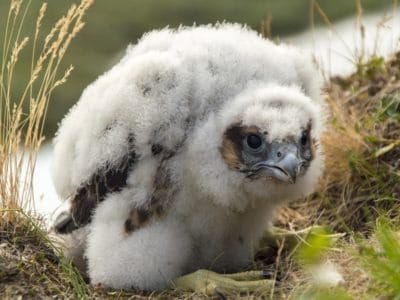 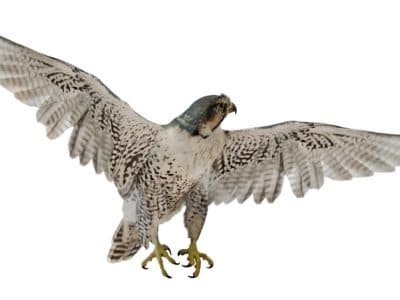 View all of the Peregrine Falcon images!

“The Peregrine Falcon is a small, deadly and powerful aerial diver.”

Peregrine falcons, also historically known as the duck hawk in North America, are one of the most prolific and powerful predatory birds on the entire planet. Their hooked beak, dark tear marks and grey to brown feathers are recognizable across every continent except Antarctica. Peregrine falcons are highly migratory birds, but have excellent homing instincts that can bring them back to familiar nesting grounds year after year. Their massive geographic distribution has given rise to numerous subspecies, although all of them can reach record-breaking speeds in their characteristic dive to catch their airborne prey. They are also a popular raptor species for falconers who train them to catch and return game birds.

Often simply called peregrine by observers, this raptor species was also known as the duck hawk in the United States and Canada. Their taxonomic classification is Falco peregrinus, which is part of the Falconidae family in the Aves class. The species name of “peregrinus” comes directly from the Latin word for traveler or pilgrim, which refers to the falcon’s ability to migrate vast distances each year.

The scientific community currently recognizes 19 distinct peregrine subspecies, which are primarily distributed according to native geography. They are evenly distributed across the planet, with the most diversity found in North America, Africa and Australia. The American peregrine falcon, classified as Falco peregrinus anatum, was the bird originally called duck hawk in the Americas.

Peregrines are relatively large for a falcon, with a body length of 1 to 2 feet and a wingspan that can reach almost 4 feet from tip to tip. Adult females typically weigh a bit more than males, with an average female weight of 1.8 pounds and an average male weight of 1.5 pounds. Some of the largest specimens recorded were a 3.3-pound female and a 2.2-pound male.

Despite size differences between genders, they are quite similar in terms of coloration and other visible traits. Peregrine has a distinctly hooked beak that may be multi-colored. They are usually dark, with feathers ranging in color from brown to grayish-black depending on subspecies. Adults usually have white or light color plumage on their underside that may have darker barring along the crest.

Peregrines engage in a distinct type of diving when hunting their prey. They tend to float aloft high in the sky watching for birds or bats, although they may target mammals and insects when desperate. Once they’ve selected the target, they drop into a fast drive and reach a speed of 200mph as they plummet. Some sources indicate the fastest falcon dive on record reached a breathtaking speed of 242mph, making it the fastest animal species in the world. They typically target a wing or limb of their prey to avoid harming themselves on impact.

These birds love heights and are either found floating in the sky or perched on tall structures. They may use natural structures, like mountains or tall trees, as well as buildings and other man-made ones. They are also highly migratory and may travel many miles in a single day as they scout for prey. Peregrine falcons prefer to take the skies above open areas, like fields and beaches, where they can easily spot potential prey. Since they mate for life, they typically travel and nest in pairs.

While they tend to prefer temperate to cold climates, the peregrine is found on every continent in the world except Antarctica. They also inhabit most climate zones, with the exception of frigid polar environments, extreme deserts, and tropical rain forests. They are also considered a highly successful urban predator and are often seen hunting in cities and other developed areas.

Their migratory nature can carry individual birds over 10,000 miles in a single year, with some going from the Arctic to areas south of the Equator on an annual basis. As such, their habitats can be extremely diverse, ranging from the open tundra to rugged mountains. Despite their wandering nature, falcons often return to the same exact nesting ground each year to lay their eggs and look after their young.

Like other raptors, the peregrine is a true carnivore and predator. They spend a lot of their time soaring around high in the sky waiting for an opportunity to plunge at a prey animal. Birds in flight are their primary target, but they are also known to eat smaller animals or even insects when they are desperate for food.

What do peregrine falcons eat?

Medium-sized prey birds are the ideal target for peregrine falcons. Plump fowl like pigeons, doves, ducks, and other water birds are favored prey, but they can also target wading and songbird species. One of the many astounding facts about these falcons is that they prey on up to 2000 distinct bird species across the planet. They have a substantial range in potential target size and can kill birds much larger than themselves.

Peregrines are often near the top of the food chain in their various native ranges, but that doesn’t mean they don’t have their own threats to worry about. They can fall prey to large air-borne predators like eagles and the great horned owl. Nesting falcons may also be vulnerable to land-bound reptiles and mammals depending on their choice of nesting site.

The biggest threat to peregrine populations has historically been pesticide use. The 1960s and 70s saw a significant decline in their global population due to the build-up of DDT and other toxic chemicals in their targeted prey species. However, subsequent curtailing of pesticides has led to a resurgence in population and the peregrine is now considered a species of least concern in terms of conservation. The facts of habitat disruption and ecological encroachment by human development are also concerns, but the species has shown remarkable ability to survive in urban or suburban environments.

Peregrine falcons aren’t just serious about hunting, they can also be quite serious about their courtship and nesting habits. These birds mate for life and usually return to the same nesting ground every single year. Males court their prospective mates through a series of complex and acrobatic aerial spirals, dives, and other maneuvers. They also pass prey that they’ve caught to the female in a mid-air swap that requires the female to fly upside down in parallel.

These birds become quite territorial once the breeding season begins and they actively defend their nest against predators, which can include other peregrines, ravens, and gulls. Ground nests may also be vulnerable to various mammals, like wolves, mountain lions, and wolverines. They may alert each other to impending threats through a distinctive call made of short, repetitive “kak” sounds. Otherwise, these birds are generally quiet and don’t make a sound while hunting or flying.

Females generally lay a clutch of 3 to 4 eggs in their nest, which is called a scrape. Both members of the mating pair help protect and incubate the eggs for about a month. The chicks, called eyases, start learning to fly around the 45-day mark. Falcons become sexually mature at 2 to 3 years old and have a potential lifespan of up to 20 years, although the average life expectancy is 7 to 15 years.

Their vast migratory range, habitat diversification, and massive geographical distribution does give the peregrine population some resilience against local disruptions. Their numbers are difficult to track since individuals may travel across multiple continents within a single year. Their population is now considered stable since the sharp decline in the 20th century and some researchers believe there may even be more of them now than there were before the pesticide crisis. Current global population numbers are thought to be steady at around 140,000 mature individuals.

Like most raptors, the peregrine falcon is a professional predator and true carnivore. They only target other living animals, usually birds, and aren’t known to eat carrion.

What do peregrine falcons eat?

Peregrine prefers to target air-borne birds, particularly pigeons and various waterfowl. They aren’t restricted to these species though and some experts estimate that they have a potential prey range that includes almost 2000 different bird species. Small mammals and insects are also potential food sources in dire circumstances.

How fast do peregrine falcons fly?

Adults can reach diving speeds of 200 miles, or 320 kilometers, per hour. The fastest speed on record is over 240 miles per hour, making it the fastest animal species on the planet.

How big is a peregrine falcon?

Peregrine falcons are among the largest falcon species with an adult weight range of 19 to 57 ounces. They are generally between 14 and 19 inches long with a wingspan of around 3 feet across.

Where do peregrine falcons live?

Peregrine falcons live on every continent except Antarctica and make their home in almost every kind of habitat, with the exception of desert, polar and tropical extremes. They prefer places that afford them a wide and open view, like beaches and fields, that make it easy to find prey. They are highly migratory and can fly thousands of miles and visit multiple continents on an annual basis.

How many Peregrine falcons are left?

Exact numbers are unknown and are difficult to track due to the falcon’s migratory patterns and wide distribution. However, conservationists believe there are about 140,000 mature adult falcons around the world. The local population in the United States is estimated to be around 23,000

What Kingdom do Peregrine Falcons belong to?

What phylum do Peregrine Falcons belong to?

What class do Peregrine Falcons belong to?

What family do Peregrine Falcons belong to?

What order to Peregrine Falcons belong to?

What type of covering do Peregrine Falcons have?

Peregrine Falcons are covered in Feathers.

What are some predators of Peregrine Falcons?

Predators of Peregrine Falcons include eagles and owls.

What is the scientific name for the Peregrine Falcon?

The scientific name for the Peregrine Falcon is Falco peregrinus.

What is the lifespan of a Peregrine Falcon?

Peregrine Falcons can live for 15 years.

How many species of Peregrine Falcon are there?

There is 1 species of Peregrine Falcon.

What is another name for the Peregrine Falcon?

The Peregrine Falcon is also called the peregrine or duck hawk.

How many babies do Peregrine Falcons have?

The average number of babies a Peregrine Falcon has is 2 to 5.

What is an interesting fact about Peregrine Falcons?

The Peregrine Falcon is the fastest animal on Earth.

How do Peregrine Falcons have babies?