Scientists have speculated that its bite force was equivalent to that of a 551 pound lion! 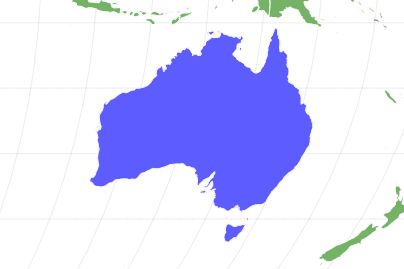 Prey
Diprotodon, another marsupial that is now extinct, Palorchestes, a four-legged herbivore, and Procoptodon and Sthenurus, both giant kangaroos.
Fun Fact
Scientists have speculated that its bite force was equivalent to that of a 551 pound lion!
Most Distinctive Feature
The thylacoleo was a marsupial like a kangaroo or an opossum.
Distinctive Feature
Somewhat opposable thumbs
Number Of Species
3

View all of our Thylacoleo pictures in the gallery.

View all of the Thylacoleo images!

The thylacoleo was a genus of animals that contained the largest carnivore that ever lived in Australia and had the most powerful bite of any mammal, whether extant or extinct.

Paleontologists believe that the largest species of this animal, T. carnifex stood around 30 inches tall at the shoulder and 59 inches long and weighed about 223 to 287 pounds. Though that would have made the animal about the same size as a lioness or a jaguar, scientists have speculated that its bite force was equivalent to that of a 551 pound lion, and modern lions rarely grow that big. Interestingly, the thylacoleo, also called the marsupial lion was not really a lion but a marsupial like a kangaroo or an opossum. This meant that its young were born at a very early stage and developed in their mother’s pouch. Still, thylacoleo had some catlike features. They included:

Thylacoleo also had thumbs that were somewhat opposable. These thumbs bore huge claws. The animal used these claws to catch their prey and then eviscerate it. It didn’t have a tail like a cat or a lion but one that was most like the tail of a kangaroo. It was made up of powerful bones called chevrons that supported the animal like a tripod when it stood on its hind legs. This left its forelegs free to grab and slash at prey.

The thylacoleo also had very specialized teeth, especially its cheek teeth. These teeth had evolved into modified shearing blades, and they joined upper incisors that were large and serrated and nearly horizontal lower incisors. These teeth evolved at the expense of the animal’s canines and back molars, which were either much smaller or altogether absent.

Despite its fearsome equipment, thylacoleo was not a fast runner and probably ambushed its prey, possibly by dropping down on it from a tree or bursting out of a bush when an animal came within striking distance. Paleontologists also believe that this hunting technique probably led to the animal having spots or stripes, which would have camouflaged it. The second and third toes on its hind feet were also fused, which is a characteristic of animals found in its order, Diprotodontia.

Origin of Its Name

Thylacoleo means “pouch lion.” The name comes because the animal was both a marsupial and resembled a lion in its strength, ferocity, and hunting prowess. The order it belonged to, Diprotodontia, is Greek for “two forward teeth,” and describes the animal’s dentition.

Diet: What Did the Thylacoleo Eat?

The thylacoleo was a carnivore and certainly an apex predator wherever it was found. It is believed that one of its most favored prey animals was diprotodon, another marsupial that is now extinct. Diprotodon was the largest marsupial that ever lived, and was the size of a hippopotamus. Its length was nearly 10 feet, and it weighed over 3 tons. Yet, the thylacoleo was powerful enough to take it down. Interestingly, diprotodon belonged to the same order as the thylacoleo and its skull, though much larger, looks very much like the skull of thylacoleo. However, diprotodon was an herbivore, and its closest living relatives appear to be modern wombats.

Another animal favored by thylacoleo was Palorchestes, another large member of the Diprotodontia order. Like diprotodon, it was a four-legged herbivore. Some paleontologists believe that this animal had a short trunk that helped it browse from trees. Thylacoleo also preyed on Procoptodon and Sthenurus, both giant kangaroos. Though Procoptodon stood over 6.5 feet tall, Sthenurus stood around 10 feet. Thylacoleo seemed not to be adept at catching small prey, so it specialized in these large animals. It’s also believed to have been a scavenger and was big and bold enough to drive other scavengers away from a carcass.

Habitat: When and Where It lived

The marsupial lion ranged over most of Australia during the late Pliocene and much of the Pleistocene epochs, which was 1.6 million to 11,700 years ago. It could be found in woods, scrublands and semi-desert areas that had bodies of water.

Very few animals threatened the formidable adult thylacoleo, but it did have to compete with some frankly terrifying neighbors. One of them was the Quinkana, a crocodile that ranged from 6.5 to nearly 20 feet long. Moreover, this crocodile was terrestrial judging from its long legs and its knife-like, serrated teeth. These teeth were meant to slice into a prey animal and cause it to bleed to death as opposed to dragging it underwater and drowning it. Another potential threat was a goanna called Varanus priscus, or Megalania. This lizard ranged from 14.7 to 23 feet long and could grow even larger. The thylacoleo also had to contend with a 16 to 20-foot-long snake called the Wonambi naracoortensis.

Of course, the biggest threats thylacoleo eventually had to face were humans, who arrived in Australia about 60,000 years ago. Even if humans managed to steer clear of this predator, their methods of hunting and farming drastically reduced the number of the marsupial lion’s prey animals. Some also believe that climate change put pressure on the thylacoleo and the other Australian megafauna, but it was most likely humans that did them in the end.

Discoveries and Fossils: Where It was Found

Some people believe that the first thylacoleo fossils were discovered in the 1830s in New South Wales, Australia by Thomas Mitchell, but the animal was first described in 1859 by the British biologist and paleontologist Sir Richard Owen. These fossils were bits and pieces of the animal, and part of a skull of T. carnifex was discovered in 1843 by William Adeney. He found part of the nose of the same animal about 33 years later in Lake Colongulac in southeastern Australia.

Since then, many fossilized remains of thylacoleo have been discovered around Australia, but the first almost complete thylacoleo skeleton wasn’t found until 1966. Some of the more notable were eight nearly complete skeletons that were found in a cave in Nullarbor Plain in southern Australia. These animals apparently fell through a crevasse into the cave. Some were killed outright by the fall, while others survived but couldn’t get out and starved to death. These fossils are now found in The Australian Museum.

Extinction: When Did It Die Out?

Paleontologists believe that the main cause of the thylacoleo’s extinction was human activity, but the climate had been drying out in the animal’s range for hundreds of thousands of years. This might have caused a decrease in thylacoleo’s prey, but it’s believed the real culprit was humans simply hunting the animal to extinction around 30,000 years ago as well as hunting its prey. Interestingly, no other large carnivorous marsupial has filled the niche of the thylacoleo in Australia.

Similar Animals to the Thylacoleo

The Pleistocene epoch seems to have been a time for huge and frankly scary creatures, including mammals. Thylacoleo was a rather unique animal, being an apex predator as well as a marsupial and possibly descended from an herbivore. But other animals that may have been somewhat like it include:

When did the thyacoleo live?

The thylacoleo was alive during the late Pliocene and for much of the Pleistocene epoch, which began about 1.6 million years ago and ended 11,700 years ago. The animal has been extinct for about 30,000 years.

How big was the thylacoleo?

The type species of this predatory marsupial, T. carnifex stood about 30 inches high at the shoulder, was 59 inches long and could weigh between 223 and 287 pounds. it was about as large as a modern-day lioness.

How many thylacoleo species were there

T. carnifex was the largest and latest of these animals. T. crassidentatus and T. hilli lived during the Pliocene epoch and were only about the size of a large and small dog, respectively.