Sea snakes spend approximately 90% of their lives under water. 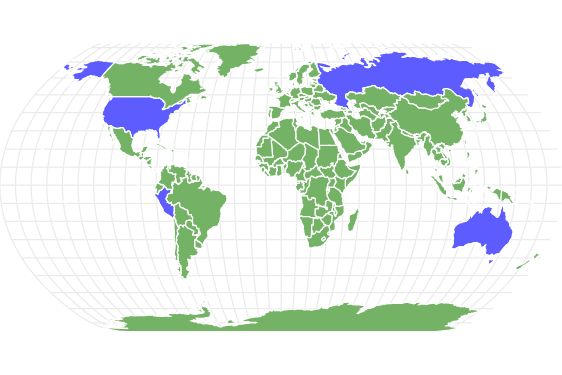 View all of our Yellow-Bellied Sea Snake pictures in the gallery.

View all of the Yellow-Bellied Sea Snake images!

The yellow-bellied sea snake has the largest habitat range of any snake species in the world.

The yellow-bellied sea snake belongs to a unique genus that inhabits marine environments. It stays in the water during its entire life and cannot even properly move or stay upright on land. The species has many unique adaptations to help it survive life at sea: the nostrils are positioned high on the snout to breathe at the surface, and the tapered belly provides stability in the water like the keel of a boat. This article will cover even more interesting facts about its habitat, diet, and hunting strategy.

Where to Find Yellow-Bellied Sea Snakes

The yellow-bellied sea snake is found all throughout the Indian and Pacific Oceans. Its natural habitat range traces a long line from the coast of Southern and Eastern Africa, to the entire coast of Asia up to the border of Russia, and most of the major Pacific Islands, including Hawaii and Australia. It is also found along the coast of the Americas, from southern California to Peru. Unlike many other types of sea snakes, this species is most likely to be found out in open oceans, a short distance from any land. Their favorite location for hunting and breeding is the sea kelp mats found out in the ocean. They ride the ocean currents to travel between locations.

The scientific name of the yellow-bellied sea snake is Hydrophis platurus. Hydrophis literally means water serpent in ancient Greek. Platurus likewise means flattened tail. It is closely related to other types of sea snakes in the same genus such as the slender-necked sea snake and Peters’ sea snake.

According to the IUCN Red List, the yellow-bellied sea snake is a species of least concern. Population numbers have not been properly estimated, but they appear to be among the most widely distributed snakes in the world. It has few threats in the wild except perhaps for water pollution.

The yellow-bellied sea snake is easily identified by its bright yellow-colored body. This is accompanied by a long black or dark brown stripe along the back that becomes spotted near the paddle-shaped tail. The head is long and blunt. The large eyes have a dark blue iris. The scales are small, smooth, and hexagonal in shape. The entire body can reach up to 4 feet long, and females are several inches longer than males on average.

Here is how to identify the yellow-bellied sea snake:

Yellow-Bellied Sea Snake: How Dangerous Are They?

The yellow-bellied sea snake has the ability to produce highly toxic venom that causes muscle pain, stiffness, drowsiness, vomiting, and even paralysis. Deaths can even occur in a small number of serious untreated cases. A highly effective antidote that neutralizes the venom is available, but medical treatment must be sought as soon as possible to minimize any long-term effects and permanent damage to the body. Fortunately, the small fangs mean that only a small amount of toxin can be injected at a time. They also have the ability to control the amount of venom they inject, saving most of it for when they’re hunting prey. Defensive bites may not deliver any venom at all.

Because they tend to live out in the open ocean, the yellow-bellied sea snake is rarely encountered by people unless it happens to wash up somewhere close to the shore. They do have the tendency to bite if mishandled or threatened in some way. If you ever see one washed up on the beach, even if it’s sluggish and slow-moving, you should never try to handle one yourself. You should instead call a local wildlife control agency to take care of it. Fishers from Southeast Asia are most likely to accidentally encounter one and suffer from a bite, but there have been no reported attacks in Hawaii or the rest of the United States.

How do yellow-bellied sea snakes hunt?

The yellow-bellied sea snake waits motionless near the surface for prey to swim beneath it. The snake will then strike at the prey with its surprising speed, using the venom to subdue it. This species is likely to target entire schools of fish rather than individuals. This ensures it is maximizing the efficiency of its hunt.

The yellow-bellied sea snake is considered to be aggressive and should be avoided at all costs.

Where do yellow-bellied sea snakes live?

The yellow-bellied sea snake lives in many different locations throughout the Indian and Pacific Oceans. It is most commonly found in the open oceans a short distance from the shore. This species is also the only sea snake to have reached Hawaii and one of two in New Zealand.

What do yellow-bellied sea snakes eat?

The yellow-bellied sea snake feeds almost exclusively on fish. Some of their favorite meals include mullets, jacks, anchovies, and damselfish.

How poisonous is the yellow-bellied sea snake?

The yellow-bellied snake has enough venom to kill a person in a single bite.

What happens if a yellow-bellied sea snake bites you?

The venom is made from a combination of various neurotoxins which, as the name implies, directly attack the nervous system of its victim by blocking the transmission of messages from the nerves to the muscles. In severe cases, partial or complete paralysis, cardiac arrest, or renal failure may result.

Can you touch a yellow-bellied sea snake?

It is not a good idea to handle this species, because if you make physical contact, it does have the tendency to bite.