North Dakota is officially known as “The Peace Garden State.” That said, many more people know it as “The Land of the Dakotas,” which pays homage to the Dakota tribes that have lived in the region for hundreds of years. The Dakota people specifically remember the state for its bountiful resources, including a wide variety of plants and animals. The state is home to massive mammals, like the American bison, as well as majestic bald eagles. At the same time, the state also features an array of common spiders. From jumping spiders to orb weavers, you can find a host of spiders in North Dakota. Here is a list of spiders in North Dakota that you can find throughout The Land of the Dakotas.

The banded garden spider, Argiope trifasciata, is one of the most common spiders in North Dakota. A member of the orb-weaver family Araneidae, you can find it spinning its orb-shaped web in gardens and fields throughout the state. While originally native to North and South America, its range now extends worldwide.

Adult female banded garden spiders measure from 15 to 25 millimeters long, and males measure 4 to 5 millimeters long. The top of the abdomen looks white and features alternating black and yellow bands. Meanwhile, the bottom of the abdomen appears primarily yellow, except for a wavy brown stripe down the middle. Finally, these spiders have orange legs with black bands.

Depending on the banded garden spider’s size, their webs can reach up to two feet wide. You can often find the females hanging upside down in the center of their webs, waiting for prey. Their bite is not considered medically significant.

Herpyllus ecclesiasticus is more commonly known as the eastern parson spider. It belongs to the ground spider family Gnaphosidae and ranges throughout the eastern half of North America. If you want to find these spiders in North Dakota, your best bet is to look in your home or under rocks or logs in forests.

Most adult eastern parson spiders measure between 10 and 20 millimeters long, with females measuring larger than males. Fine black hairs cover the cephalothorax, while grey hairs cover the abdomen. These spiders feature a characteristic white mark shaped like a cravat (necktie) worn by 18th-century clergy or parsons, hence their name.

During the day, eastern parson spiders hide in silken retreats and emerge at night to hunt their prey. They often ambush their prey but can also run very quickly if they need to pursue a target. Although their bite is not medically significant, it can be quite painful.

The common house spider, Parasteatoda tepidariorum, is also known as the American house spider. It belongs to the cobweb spider family Theridiidae and is one of the most common spiders in North Dakota. You can often find it in and near human dwellings, hence its name.

Adult female common house spiders usually measure from 5 to 6 millimeters long, while males measure 4 to 5 millimeters long. People often mistake them for widow spiders due to their similar size, color, and shape. They range in color from tan to black and feature a wide variety of abdominal markings.

Common house spiders construct asymmetrical cobwebs that they use to capture their prey. They detect vibrations in their web and then entangle insects in silk before paralyzing the target with a toxic bite. While venomous, their bite is not considered threatening to humans.

Scytodes thoracica, or the brown spitting spider, is a member of the spitting spider family Scytodidae. It is a cosmopolitan species that lives on every continent except Antarctica.

Most adult brown spitting spiders measure from 3 to 6 millimeters long, with males measuring smaller than females. They possess six instead of eight eyes, unlike most spiders. Another unusual feature is that the carapace points noticeably upward while the abdomen slopes downward. These spiders look primarily tan or light brown and feature dark brown markings on their body and legs.

Brown spitting spiders use a different method of catching prey compared to other spiders in North Dakota. They fire silk laced with venom at their prey from a distance, thereby entangling and immobilizing their target. Reports indicate they can hit insects up to 10 millimeters away. Due to their small size, they pose little threat to humans.

Steatoda bipunctata is more commonly known as the rabbit hutch spider. It’s the second member of the family Theridiidae to make our list of spiders in North Dakota. Its range extends throughout North America and Europe.

Adult rabbit hutch spiders usually measure no more than 7 millimeters long, with males measuring smaller than females. They have a large, brown abdomen that features one pale white line down the middle and another across the front. You can distinguish males from females by their glossy sheen. People sometimes mistake them for black widows, which is why spiders of their genus, Steatoda, are called false widows.

You can find rabbit hutch spiders in dark, dry places such as sheds, basements, or rabbit hutches, hence their name. In these spaces, they construct tangled cobwebs that they use to catch prey. Given that their fangs normally can’t pierce human skin, they pose no danger to humans.

The daring jumping spider, Phidippus audax, is also known as the bold jumper. It belongs to the family Salticidae and is one of the larger jumping spiders in North Dakota. You can find it throughout most of Canada, Mexico, and the United States.

Female daring jumping spiders average around 11 millimeters long, and males typically measure about 8 millimeters long. They appear primarily black and feature a variety of markings in colors ranging from blue to red to yellow. Additionally, their mouthparts – or chelicerae – usually look metallic blue-green.

Daring jumping spiders possess excellent eyesight and amazing leaping ability. They can jump nearly 50 times their body length, which is where they get their name. While proficient hunters, they pose little threat to humans. At worst, their bite causes some pain, swelling, and redness.

Dolomedes tenebrosus, or the dark fishing spider, is a member of the nursery web spider family Pisauridae. You can find this spider in North Dakota as well as throughout much of the central and eastern United States.

Adult female dark fishing spiders can reach up to 2.5 centimeters at the longest. Meanwhile, males only measure about half that size. Most specimens look either brown or grey and feature dark spots and spines on the legs. You can typically identify dark fishing spiders by the characteristic W-shaped markings on the top of their abdomen.

Like other members of their family, dark fishing spiders actively hunt their prey instead of using webs. They are capable of running across the surface of the water to catch insects or diving below the surface to grab small fish. While they can bite, they rarely do so, preferring to run away from humans.

The long-bodied cellar spider, Pholcus phalangioides, is more widely known as the daddy long-legs spider. It easily ranks as one of the most recognizable spiders in North Dakota. While originally from Asia, you can now find it throughout the world.

Adult female long-bodied cellar spiders usually measure between 7 and 8 millimeters long, and males measure around 6 millimeters long. That said, adult females can measure nearly 50 millimeters long with their legs extended, hence their name. They appear primarily tan or yellow, except for grey markings on the carapace. These markings sometimes take the shape of a skull, which is why some people call them skull spiders.

Long-bodied cellar spiders don’t tolerate the cold well and will retreat indoors during winter. They prefer dark, quiet areas and typically run away from humans. While they are capable of biting humans, they rarely do so, and their bite is not considered medically significant.

Latrodectus hesperus is more commonly known as the western black widow. A member of the family Theridiidae, it easily ranks as one of the most deadly spiders in North Dakota. You can find it throughout the western half of North America.

Female black widows measure between 14 and 16 millimeters long, while males measure about half that size. They appear predominantly black, except for an hourglass-shaped marking on the abdomen. While usually red, this marking can also appear white or yellow.

Western black widows construct cobwebs that they use to capture prey. Although they rarely bite people, they can bite if threatened or if they get tangled in clothes. A few common symptoms of a western black widow bite include pain, nausea, and fever. Bites rarely prove fatal, but those who are especially young and immunocompromised face an increased risk of medical complications.

The white micrathena, Micrathena mitrata, is the second member of the family Araneidae to make our list of spiders in North Dakota. It is widely distributed throughout the Americas, with a range extending from the United States in the north to Brazil in the south.

Adult white micrathenas range in size from 3 millimeters to 11 millimeters long, with females measuring larger than males. The abdomen appears predominantly white except for a few dark patches. Meanwhile, the legs and cephalothorax appear brownish-red. In English, mitrata translates to “headdress” and serves as a nod to the fact that the abdomen roughly resembles a wrapped, white turban.

You can typically find white micrathenas in gardens or parks that contain plants suitable for their webs. These spiders rely on their sticky webs to help them catch prey, which consists mostly of common garden insects and other invertebrates. Their bite is not medically significant. 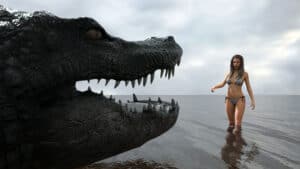