It’s a popular adage in life that people only understand the true worth of something when it’s gone. In a scientific sense, it is easier to understand the true benefit of conservation by recognizing how much biodiversity has been lost. According to scientists, the extinction rate of species on our planet will increase roughly a thousand times over the next few decades, and more than half of all living things on our planet could disappear at that point.

There have been numerous reports already about the extinction of several living things, including multiple bird species. The iconic bird group of parrots, known for their vibrant colors, charisma, and intellect, is in danger everywhere: nearly one-third of all parrot species face extinction. But which ones have already said goodbye forever?

The Earth was more vibrant when flocks of different parrots flew across the sky like daylight fireworks, flashing orange, yellow, and green. More than 350 bird species make up this bird group, including macaws, amazons, lorikeets, lovebirds, cockatoos, and other bird species. However, several of these cherished parrots have become extinct. This article will discuss the 16 extinct parrot species and other interesting facts.

Discover the 16 Extinct Types of Parrot

The Carolina parakeet, one of the few parrot species native to the United States, was stunning in its vibrantly colored plumage. Sightings had been fairly common in the east, but population numbers drastically decreased throughout the ages due to various circumstances, many of which were caused by humans, but others were natural. Before it was officially declared extinct in 1939, the last known specimen perished in the Cincinnati Zoo in 1918.

The Carolina parakeet preferred habitats like woodlands close to rivers or swamps. It was considered one of the most colorful native birds in the entire United States when it was still alive. It was brightly colored, with yellow around the neck, bright green or blue on the body, and red or orange on the face. Possibly measuring about 14 inches from head to tail, males were somewhat bigger than females but otherwise had identical plumage. Additionally, this species had a large, sharp beak that was ideally suited for splitting open nuts and seeds.

The Norfolk kākā is an extinct species of large parrot, which belonged to the parrot family Nestoridae. It lived on Norfolk Island and the neighboring Phillip Island’s cliffs and treetops and was related to the New Zealand kākāpo. The bird was around 38 cm (15 inches) long, with predominantly olive-brown upperparts, (reddish-)orange cheeks and throat, straw-colored breast, dark orange thighs, rump, lower belly, and a pronounced beak.

Before Europeans arrived, the Polynesians who had lived on the island hunted the kākā for food, then vanished from the island about 1600. Following the first settlers’ arrival in 1788, the bird was also killed for sustenance and captured as a pet. In 1851, the last bird kept as a pet passed away in London.

The medium-sized, colorful paradise parrot was a native of the grassy woodlands that run along eastern Australia’s border with Queensland and New South Wales. The last living bird was spotted in 1927; it was once extremely widespread within its fairly small range. It is the only Australian parrot listed as missing and thought extinct due to prolonged and intensive searches in the years since then, yielding no conclusive trace of it.

Even by parrot standards, the plumage of the paradise parrot was incredibly colorful, with shades of turquoise, aqua, scarlet, black, and brown. Its tail was almost the same length as the body, so it was surprising that it devoted almost all of its time on the ground, despite being a swift flyer.

The broad-billed parrot, also known as the raven parrot, is a large extinct parrot in the family Psittaculidae. It was only found in Mauritius, a Mascarene island in the Indian Ocean east of Madagascar. Unfortunately, this bird became extinct in the 17th century due to hunting, introduced invasive species, and deforestation.

The broad-billed parrot had an enormous head compared to its body and had a conspicuous crest of feathers on top. The bird’s enormous beak, similar in size to the hyacinth macaw’s, would have allowed it to split hard seeds. According to subfossil bones, the species had more sexual dimorphism in body and head size than any living parrot. Although the exact coloration is uncertain, a description from the period suggests that it had a variety of hues, including a blue head and possibly a red body and beak. It was thought to have had limited flight ability but was not flightless.

In the east of Madagascar, in the Indian Ocean, lived an extinct species of parrot known as the Rodrigues parrot or Leguat’s parrot on the Mascarene island of Rodrigues. Although it is grouped with other Mascarene parrots in the tribe Psittaculini, it is unknown to which other species it is most primarily linked. The broad-billed parrot of Mauritius shared characteristics with the Rodrigues parrot, suggesting that they may have been related.

This bird was green and had a long tail. Its head and beak were proportionately enormous; although its exact size is uncertain, it may have been 50 cm (20 in) long. It had the biggest head of any Mascarene parrot and was the biggest parrot on Rodrigues. It might have resembled a great-billed parrot in appearance. It was last seen in 1761 and likely went extinct shortly after, possibly due to rat predation, deforestation, and human hunting.

The Mascarene parrot measured 35 cm (14 in) in length and had long, rounded tail feathers and a huge red bill. It had red legs and exposed red skin around its eyes and nostrils. Although the coloration of the living bird’s body, wings, and the head is undetermined, it had a black mask across its face and partially white tail feathers. According to descriptions, the body and head were both ash gray, and the white portion of the tail had two dark feathers in the middle.

An extinct parrot species native to Seychelles in the Indian Ocean is known as the Seychelles parakeet or Seychelles Island parrot. It was discovered on Mahé, Silhouette, and maybe the Praslin islands. There are currently ten skin samples but no skeletons. Although it was later transferred to the genus Psittacula, genetic investigations have prompted some experts to hypothesize that it, along with the closely related Alexandrine parakeet of Asia, should be included in a reinstated Palaeornis.

There isn’t much information about its behaviors, although it is likely that they were comparable to the Alexandrine parakeets, which associate in groups in forests and fly between communal roost places and eating regions. When woods were destroyed, these birds quickly adapted to developed regions, and their diet included fruit. Despite being widespread in 1811, it had become rare by 1867 as a result of human persecution for what was thought to be crop damage. By 1906, no birds had been discovered since the last confirmed one was shot in 1893.

Based on human standards, parrots are among the smartest bird species, and their ability to mimic human speech makes them a particularly popular choice for pets. However, no amount of intelligence can outwit extinction, and a few of their species have already vanished. 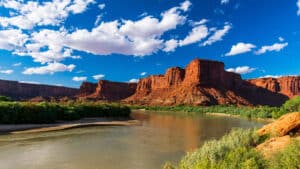