The 10 Strongest Animals in the world by Bite, Squeeze, and Lift

Alexandra Giese/Shutterstock.com
Share this post on:
More Great Content:
Watch an Eagle Attack A Trespassing RC…
Discover the One Place on Earth that…
What Kills Bed Bugs Instantly?
Watch a Fierce Grizzly Battle Over Whale…
Is Mandevilla A Perennial Or Annual?
Are Brown Recluses in California?

When we talk about determining the strongest animal in the world, it’s hard to say definitively which animal wins. This is because there are so many different kinds of strength that it is nearly impossible to pick a single animal out as the strongest of all.

Instead of trying to determine a single winner, this list features 10 amazing creatures that all possess their own impressive kind of strength, relative to their size. Some of the animals that made this list may surprise you, but you surely wouldn’t want to get on the bad side of any of them, no matter how small they are!

The strongest animals in the world are:

When you think of sheer brute strength, you probably think of lions or gorillas. However, the reality is that the majestic and typically docile elephant wins the prize for the world’s strongest mammal.

An Asian elephant‘s trunk has more than 150,000 muscle fibers making up 40,000 distinct muscles. Comparatively, the trunk consists of very little fat and no bones or cartilage. In addition to being incredibly strong, elephant trunks’ tips have finger-like abilities. This allows elephants to use fine motor skills and manipulate very small objects with their trunks.

Yet elephants’ intense level of power also allows it to easily uproot fully grown trees or forcefully spray up to a gallon of water. In addition, elephants can carry up to 14,000 pounds, which is seven tons. To put that into perspective, that weight translates to about 130 adult humans.

Visit the elephant encyclopedia page to learn more about these strong herbivores.

The beautiful and graceful eagle holds the title of the strongest bird. There are about 60 different species of eagle in the world today, and they are some of the largest birds of prey in existence.

Some eagle species prey on comparatively large animals like monkeys and sloths, so it should come as no surprise that they are able to easily lift things that are many times their own weight during flight.

For example, the amazingly powerful harpy eagle weighs about 11 pounds, yet it can carry away prey that weighs up to 35 pounds – that’s about the weight of a medium-sized dog, like a corgi.

Read more about eagles and their other behavioral traits here.

As soon as you take one good look at the Atlantic goliath grouper, you will likely understand how it got the title of “strongest fish.” They can grow to be up to nine feet long. And the largest recorded size of one of these massive fish is 800 pounds – that’s about the weight of a female moose!

They will eat just about anything in the ocean, and they are big and strong enough to even eat sharks. Goliath groupers have attacked octopuses, sea turtles, barracudas, and even human divers.

Fishermen who want a serious challenge often seek out goliath groupers because their enormous size and relative strength make them extremely difficult to land.

Currently, International Union for the Conservation of Nature (IUCN) considers goliath groupers a critically endangered species due to overfishing. But conservation efforts over the past few decades have bolstered population numbers significantly.

When you search the internet for terms like “world’s strongest animal,” the dung beetle is almost always one of the top results.

The dung beetle certainly earns its place as one of the strongest animals in the world, especially when you consider its size versus how much it can carry. They typically grow to be up to one inch long and weigh less than an ounce, but they can carry an amazing 1,141 times their own body weight.

To put that kind of strength into perspective, if a human could move that much weight, it would be the same as one person pulling six full double-decker buses by themself.

Dung beetles use this super strength to roll enormous balls of dung back to their homes, but they also utilize their strength to defend against thieves and impress females during mating periods.

Technically, the strongest insect title also belongs to the dung beetle, but the Hercules beetle is a close runner-up and definitely worthy of notice as well.

Hercules beetles can grow to be up to seven inches long and weigh up to four ounces. The Hercules Beetle are large and fairly impressive insects. They are known for their long horns which act as a defense against predators. They can be also used when males fight each other over a potential mate.

Male Hercules beetles maintain a territory during the mating season and fight to project it from other males. The insects are named after Hercules, the hero of Ancient Greece mythology who was infamous for his strength.

While they cannot carry quite as much as a dung beetle relative to their size, these insects are still believed to be able to move a whopping 850 times their own body weight.

Find out more on the hercules beetle encyclopedia page.

7. Strongest Snake: Anaconda – Squeezes With the Power of 10 Men

Anacondas are considered the strongest snakes in the world, and they can also grow to be some of the largest as well. In fact, the green anaconda also holds the title of the heaviest snake in the world at 1,100 pounds.

A big enough anaconda has been known to kill large deer, jaguars, and even black caimans (a reptile similar to an alligator). Anacondas can constrict around their prey with the strength of at least 10 powerful men, so they are generally considered to be apex predators. Because they can kill and eat such large animals, a single meal can provide enough nourishment that an anaconda doesn’t have to eat again for weeks or months.

The blue whale is not only the largest animal in the world, weighing in at about 200 tons, but it is one of the most powerful as well.

Blue whales can generate 600 horsepower, which is the same as many top-tier cars such as the Aston Martin DB11 and the Porsche 911 Turbo. In addition, they can travel easily at speeds up to 23 miles per hour for long distances, and they can move at least 30 tons through the water.

Find out more about the amazing blue whale.

Between the well-known force behind the kick of a red kangaroo and a giraffe, you might be surprised to read that the zebra beats them both.

When threatened, an adult zebra can kill a fully grown male African lion with a single blow to the body. Though it is difficult to get a precise measurement, it is thought that a zebra can kick with nearly 3,000 pounds of force.

Learn more about the beautiful, yet powerful zebra here.

10. Strongest Fighter: Grizzly Bear – Can Lift More than Twice its Own Weight

Despite their cuddly appearance, grizzly bears are strong and deadly creatures.

They can weigh up to 500 pounds and reach top speeds of up to 30 miles per hour. Even though they are far smaller than their polar bear cousins, they are much more aggressive and far more likely to win a fight. They have immensely strong front legs and are built to take down large creatures like elk, musk ox, bison, and reindeer.

Find out more about this fearsome fighter on the grizzly bear encyclopedia page.

Strength comes in many shapes and sizes. When it comes to strength, there is no clear winner. So many creatures have their own amazing types of strength and power that it’s hard to pit them against each other to decide who is the all-around strongest. But, this top 10 list should have given you a better idea of all of the different kinds of strength that exist in the animal kingdom.

10 Strongest Animals in the World by Bite, Squeeze, and Lift- Summary

Polish Cats Are Now Confirmed “Invasive Species.” How Can That Be? 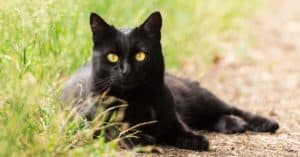