The muntjac is the smallest type of deer in the world

Click through all of our Muntjac images in the gallery. 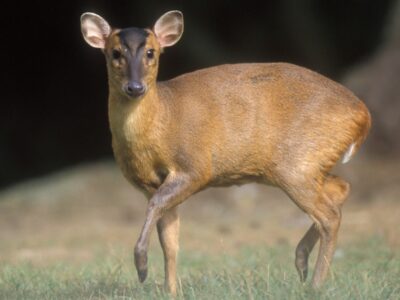 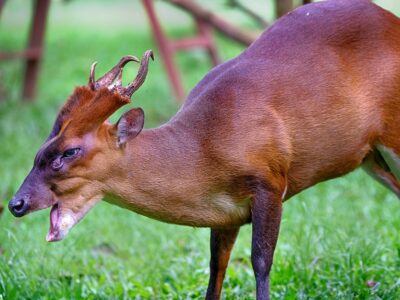 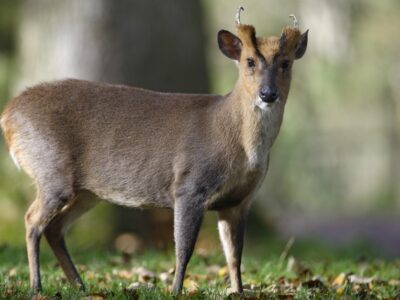 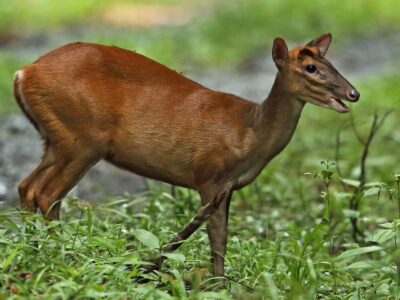 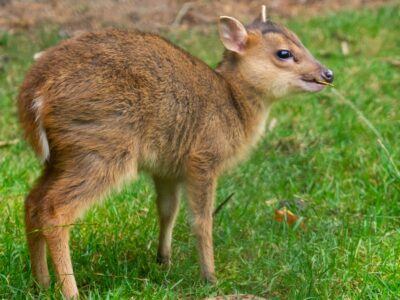 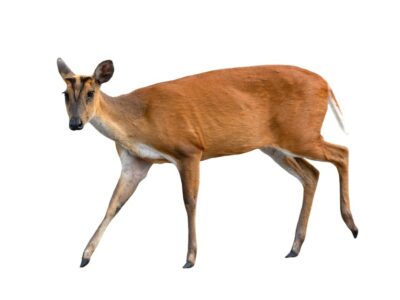 View all of the Muntjac images!

The muntjac is characterized by short antlers and long canine teeth, both features of early “primitive” deer.

The muntjac (pronounced munt-jack with an “uh” sound) is a genus of small deer native to Asia. It’s also known as the barking deer (because of the sound it makes) and the rib-faced deer (because of the bony ridges along the face). There are currently 12 recognized species in this group. The best known and most widespread species is the Indian muntjac, which itself has given rise to around 15 distinctive subspecies. This animal bear strong similarities to the Chinese water deer and the tufted deer.

The scientific name of this genus is Muntiacus. The name comes from the Dutch word muntjak, which itself is derived from an indigenous word originating from the island of Java. It entered English vocabulary after the Netherlands colonized the Indonesian region. This genus is a member of the deer family and a type of even-toed ungulate (like cows and pigs).

The muntjac looks very much like a miniature deer. They are characterized by short but dense fur, a triangular head, oval-shaped ears, and slender legs. Coloration varies between dark brown and yellow, depending on the season, with white markings on the abdomen and black marks possible on the face.

The most prominent characteristics, at least on the male, are the short antlers that grow from the head and the tusk-like upper canine teeth that project from the mouth. These antlers tend to have a simpler structure than the antlers grown by other types of deer. The females have small knobs instead of antlers, and their bodies are generally smaller in size than males.

Depending on the sex and the species, this animal normally stands somewhere between 15 and 25 inches tall at the shoulders, or about the same as a medium-sized dog breed. It also has a body weight of up to 77 pounds.

This animal spends much of its life in a state of solitary seclusion, feeding and sleeping alone. Most personal interactions seem to only occur when this animal mates. Each male will maintain and defend its own separate territory that overlaps with the territory of the females. The males will fight each other for access to mates and territory. Some species will lock antlers with each other to determine male dominance. The upper canines also serve as a very important offensive weapon. The weaker male will usually yield before he suffers serious injury, but the canines are sharp enough to inflict wounds against more serious predators and threats. When they need to get away, the muntjac is also incredibly fast and agile, evading the grip of most predators.

Despite its solitary social behavior, the muntjac is capable of emitting several vocalizations. In mating situations, the male will make a harsh buzzing sound, and the female will reciprocate with a cat-like whine to show she is receptive and willing.

The most well-known of these calls, though, is the loud barking sound for which it’s named. The muntjac only appears to make this vocalization when it is facing down a predator or a rival. Scientists still debate the significance of this call. It’s been suggested that this is actually just a cry of internal distress and doesn’t serve as a general warning call to others. This is based on the fact that the sound doesn’t appear to carry through thick vegetation very well. Another possibly explanation is that the cry serves to let the predator know the muntjac is aware of its presence. A muntjac must always look out for the signs of an ambush and never let its guard down.

Regardless of its reasons, most intra-species communication is done through scent rather than vocalizations. The muntjac will mark its territory and identity using a scent gland located near the eye. Studies have shown that the scent conveys important information about the individual, including its age, sex, and even place of origin (though this does not necessarily mean the animal is able to process or understand this level of information).

The muntjac is endemic to the tropical and subtropical forests, savannas, scrublands, and grasslands of India, southern China, and Southeast Asia. This includes the large islands of Sri Lanka, Java, Sumatra, and Borneo. Small populations have also been established in the United Kingdom, France, and Japan from escaped deer farms. They are found at elevations up to 10,000 feet and never wander very far from a source of water.

Despite how common and widespread they are, the muntjac faces several threats in their native habitat. The greatest current threat appears to be habitat destruction. Southeast Asia has one of the highest rates of deforestation in the world due to poor forest management and non-stop development. This limits their population numbers and exposes them to predators. The muntjac has been traditionally hunted over thousands of years for their meat and skin. They may serve a similar ecological role as the white-tailed deer in North America and the red deer in Europe.

What eats the muntjac?

In its native habitat, the muntjac has to contend with a number of fearsome predators, including tigers, leopards, jackals, dholes, crocodiles, foxes, and even pythons. Humans are also a significant source of predation. In England, where there is a fewer source of predators, the number of these animals has increased rapidly.

What does the muntjac eat?

The muntjac spends much of the day browsing among plants and trees. It has a specialized digestive system to process the vegetation. But there are many different components of its diet, including fruits, foliage, seeds, bark, mushrooms, bird eggs, and even dead carrion. There are also some reports that it obtains nutrients by eating small birds and mammals live. The scientific term for this type of feeding behavior is a generalist. It doesn’t seem to have a preference for any single type of food.

Whereas most other deer have a seasonal “rut” in which the male becomes sexually aroused for a limited time, the muntjac largely appears to reproduce all year round in its native habitat (with only a few exceptions). As mentioned previously, the male will attempt to monopolize reproductive access to several females at a time by fighting anyone who challenges his supremacy. His home range often overlaps with the range of the females he mates with. The weakest males (which are usually the youngest) may have few if any mates at all. The canines appear to play a significant role in the combat. The antlers are used as well, but they’re hardly as large or elaborate as other types of deer.

After a gestation period of around six to eight months, the mother gives birth to one, rarely two, offspring at a time. The baby is weaned quickly off milk and develops rapidly so it is ready to breed as soon as possible. Individuals tend to reach sexual maturity after about a year. The mother devotes a lot of time early on to feeding, protecting, and teaching her baby fawn how to survive, but once they’re independent, all parental investment will promptly end. The normal lifespan of this animal is somewhere between 10 and 15 years in the wild. Many of them will die from predation and disease before they reach the natural end of their lives. But some individuals have been known to live more than 20 years in captivity.

Population numbers across the entire genus are difficult to estimate, but there might be somewhere between 100,000 and 200,000 muntjacs in India alone. According to the IUCN Red List, the conservation status ranges anywhere between least concern (Indian and Revees’s muntjac) and critically endangered (the large-antlered muntjac). Most species haven’t yet been classified because the IUCN lacks critical population data, but numbers appear to be declining for most species.

View all 72 animals that start with M

What is a muntjac?

The muntjac is the smallest member of the deer family, with the weight and height of a medium-sized dog. Native to the dense tropical forests, scrublands, and savannas of southern Asia, it can be identified by the presence of tusk-like canines projecting outward from the mouth, as well as relatively simple antlers. It normally has a lifespan of 10 to 15 years in the wild.

Are muntjacs carnivores, herbivores, or omnivores?

The muntjac is an omnivore. They eat a combination of both plant matter and meat. Plant matter seems to be their most common food source, but they will feed on meat if the opportunity arises.

Where do muntjac live?

The muntjac lives in the tropical forests of South and Southeast Asia. The successful introduction into the temperate climates of Europe proves that they can live in other habitats as well.

Because of their wild nature and need for lots of space, the muntjac would not make a good pet. People have successfully managed to keep them on deer farms, especially if they are raised from an early age, but they should be treated as wild animals and not domesticated pets except under extraordinary circumstances. Many countries have bans against importing or keeping exotic pets without a license.

The muntjac is considered to be an invasive species in some parts of Europe because they can cause some damage to crops and they’re not as restrained by predators as in their native habitat.