Click through all of our Ibex images in the gallery. 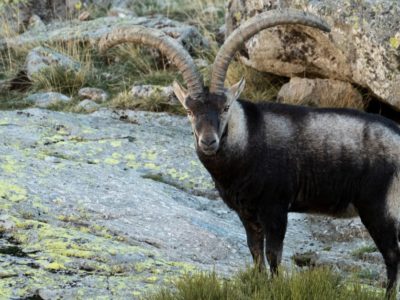 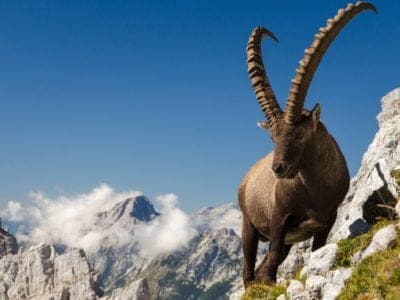 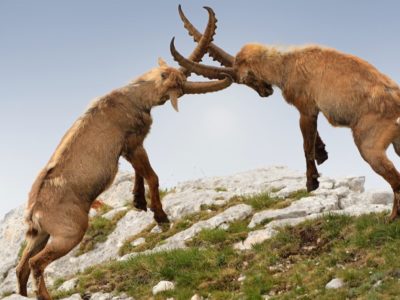 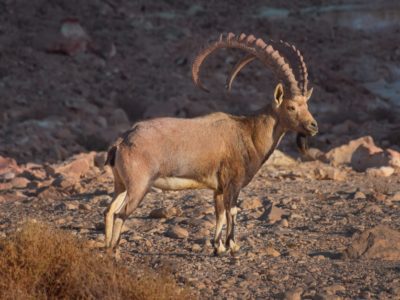 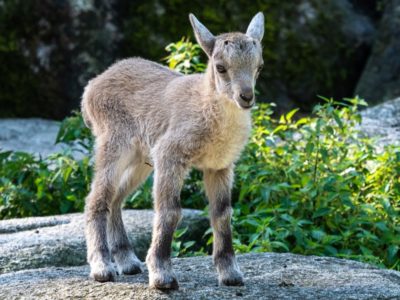 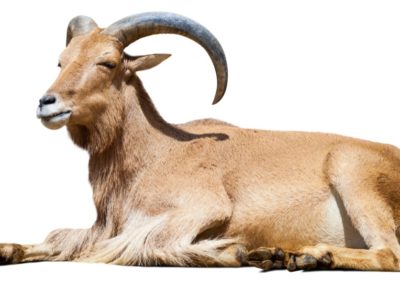 View all of the Ibex images!

As one of the main ancestors of the domestic goat, the ibex is a common sight in the mountains of Europe, Asia, the Middle East and northern Africa.

There are five main species, but some data shows as many as eight when counting subspecies. Ibex are wild goats with cloven hoofs and very long horns that curve over their back. Males typically also have beards. The alpine ibex is the most common type, and the Asiatic ibex is generally considered a subspecies.

These animals belong to the genus Capra and the family Bovidae. It has a number of subspecies, including the following:

The alpine species is the most commonly referenced species. It is also known by the names of steinbock and bouquetin. The scientific name Capra means goat in Italian.

Most species of these animals have a brown or gray coat. The exact shade and thickness are determined by where they live. For example, the Nubian species have a shiny coat that reflects the sun and helps them keep cool. Nubian ibex are smaller than other species and have slimmer horns. The alpine ibex is a typical example of the species. Adult males weigh around 220 pounds and stand about three feet at the shoulder. Females are about four inches shorter and weigh about half as much at 110 pounds. Males have long horns that curl over their backs. The horns are strongly ridged on the front. Males also have beards.

These animals typically socialize in gender-specific herds. This means that there are male herds and female herds. The male herds are often called bachelor herds. The two herds only meet up during breeding seasons. Sometimes, older males will wander alone without a herd. Female herds usually have 10 to 20 animals. The animal will usually flee from people, but if it’s rutting season males can be particularly aggressive and might charge.

These animals live primarily in high mountain regions and tall cliffs. These habitats make it difficult for predators to get to the animal. The Walia species lives in the highest reaches of the Ethiopian highlands at elevations of up to 14,800 feet. The Nubian ibex is found in the hills around the Red Sea and the Egyptian highlands. The alpine species is found mainly in the European Alps. They can be found in countries like France, Austria, Germany, Bulgaria, Slovenia, Italy, and Switzerland. The Iberian or Spanish ibex lives mainly in the southern Pyrenees on the Iberian Peninsula. It was previously found all through the Pyrenees and in the south of France. The Pyrenean ibex is a subspecies of the Iberian species, and it became extinct by the year 2000. The Pyrenean ibex was later cloned in 2009, but the specimen only lived for ten minutes.

The Siberian or Asiatic ibex is often considered a subspecies of the alpine species, but it may be a distinct species. It enjoys a wide distribution from Afghanistan to Mongolia. The animals are typically found at elevations as high as 5,300 meters above sea level. The Caucasian ibex is also known as the Caucasian tur, and it is found in the Caucasus.

The hoof structure of the animal makes it very nimble and skilled at climbing steep rocks. Despite living high in the mountains, they tend to avoid deep snow.

All of these animals are herbivores. They only eat vegetation like bushes, grasses, and shrubs. Vegetation high in the mountains tends to have low nutritional value, so the animal spends much of its day eating and grazing. Some of them will also climb into the lower branches of trees to eat leaves. As the animal avoids deep snow, they may come down from the steep elevations in the winter to find food. Herds tend to make sure that their range includes a dependable water source.

The animal’s best defense against predators is its ability to climb to steep heights. Very few predators can follow them up the steep cliffs and mountains. A threatened animal may rear on its hind legs and point its horns towards the threat. Young animals are susceptible to being carried off by large birds of prey such as eagles.

At the start of the 19th century, the animal’s population was quickly dwindling. It was often hunted for superstitious reasons. A century of aggressive protection followed, and now many species of these animals are thriving. Currently, the only species near extinction are the Ethiopian and the Spanish ibex. The Pyrenean subspecies became extinct in the year 2000.

What does ibex eat?

These animals eat all manner of vegetation, including flowers, leaves, grass, shrubs, moss and twigs.

The breeding season for these animals starts in late autumn to early winter. The males leave their bachelor herds to find females. Males often fight with other males to determine who can breed with the females. Despite the large horns of the animals, it’s rare for males to sustain serious damage from fights. Once the female becomes pregnant, the gestation period is about six months. Most young are born around May. These animals usually have one kid per litter. It’s possible for the ibex to have twins and even triplets, but the latter is very rare. Twins make up about 20% of births.

The babies are called kids, and they reach sexual maturity at about 18 months. They are often left alone when young to hide from predators. How long they stay alone depends on how quickly they pick up handling the terrain. The young usually stay with their mothers for at least a year. However, females do not reach their full body size until about five or six years of age, and males don’t reach it until nine to 11 years. The animal’s horns keep growing throughout their life.

These animals can live up to 20 years in the wild.

View all 21 animals that start with I

Are ibex carnivores, herbivores, or omnivores?

What is an ibex?

The ibex is a type of wild goat that lives in the mountains of Europe, the Middle East, Asia, and parts of Africa.

Are ibex and goat the same thing?

The ibex is a type of wild goat and one of the ibex species, the Bezoar ibex, is considered the main ancestor of the domestic goat. The alpine ibex is sometimes called a steinbock or bouquetin.

The ibex does not make a good pet as it does not have the usual traits of a domestic goat. These animals are quite large with large horns and are not particularly friendly.

Can Ibex be domesticated?

An ibex raised from a young age could potentially be domesticated. However, the ibex is not a practical domestic animal. Despite the confusing name of the Ibex company that makes wool clothing, ibex species do not provide wool. The ibex has coarse thick hair like a goat and should not be confused with sheep species that provide wool.

Do ibex die from falling?

Some types of ibex are more endangered than others. The alpine ibex and Siberian ibex are considered of least concern.

Can you eat ibex meat?

Ibex meat is edible and similar to a goat.

What is a male ibex called?