iStock.com/Atelopus
Share this post on:
More Great Content:
What Kills Bed Bugs Instantly?
How To Get Rid of Roaches Overnight
Carpenter Ants vs Black Ants: What’s the…
Where Do Bees Go In The Winter?
The 10 Largest Grasshoppers In The World
Types of Beetles: The Complete List

Ants are fascinating creatures that have a strict hierarchy within their colonies, with worker ants doing all the work.  Found almost everywhere in the world, with more than 12,000 species to date, ants are thriving.  Although many species are a similar color, the same can’t be said for their size, with them ranging from the tiniest size you could imagine to the surprisingly large. Here are the 10 of the largest ants by length.

Formica fusca is widespread throughout Europe, Asia, and Africa.  They are completely black and prefer to live in rotten trees at the edge of forests, or sometimes in hedges.  These ants can grow up to 0.28 inches in length and live in colonies of between 500 and 2,000 with several queens in each colony.  Formica fusca usually eat aphids, black flies, greenflies, and moth larvae.

The green ant, also known as the green head ant, is endemic to Australia, but some are now found in New Zealand as well.  Although they are called green ants, their color can be green or various shades of purple.  Green ants grow to lengths of around 0.28 inches with the queens being slightly larger than the workers.  They are a highly adaptable species and are able to live in a variety of habitats, including forests, woodlands, deserts, and city areas.  Green ants are venomous and their sting has been known to cause anaphylactic shock in some people which can be particularly dangerous in anyone affected, although they usually only use it to kill beetles and moths.

The Southern wood ant, also known as the red wood ant, has a striking appearance –  with an orange and black body – and grows to lengths of 0.35 inches.  Although they are commonly found in the UK they are also found in North America.  Southern wood ants prefer a woodland habitat but are also occasionally found on moors as well and their nests often look like large tufts of grass.  They have a defense mechanism where they spray formic acid onto predators.  However, southern wood ants, play an important role in pest control as they eat a wide range of beetles and small insects that would otherwise do damage to the woodland habitat.

The slave-maker ant (formica sanguinea) can grow to a length of 0.4 inches and has a bright red head and legs with a black body.  They are the largest ant in the UK, but are also widespread across the rest of Europe, Japan, Russia, China, Korea, Africa, and America.  Slave-maker ants live in a woodland habitat and are known for raiding the nests of other ants, usually formica fusca, where the queen will kill the existing queen and the workers are then made to become workers for the slave-maker ants, which is where they get their name from.  They also have an excellent defense mechanism where, like some other species, they use formic acid to kill their prey.

Black carpenter ants (camponotus pennysylvanicus) are native to Canada and eastern and central America where they can be found in most woodland areas.  They nest in trees and dead wood, however they are classed as a pest because they frequently cause damage to the structure of houses and other buildings when colonies invade them.  These ants are usually around 0.48 inches and are black with white hairs on their body.  They don’t sting and are not venomous, but they can give a sharp bite and do still spray formic acid onto the bite wound.  Black carpenter ants have a much wider range than other ants and often travel around 100 yards in search of food which is a range of plants and small insects.

Native to Australia, the banded sugar ant gets its name from their liking for all things sweet and sugary.  These ants grow to around 0.6 inches and are found in a variety of different habitats, including woodland, grassland, forests, coastal areas, and urban areas.  They are easily recognizable as females have a black head and an orange band around their middle section, while males are black with orange-brown legs.  Banded sugar ants are a common household pest as they often chew wood and damage furniture, however they don’t sting and don’t often bite people either.  They are a dominant species though and often attack the nests of other ants where they catch and kill their opponents.

Dinoponera quadriceps is a venomous species of ant from Brazil where their favored habitat is warm and humid forest regions.  They are a completely black ant that grows to a length of around 0.8 inches.  Dinoponera quadriceps is a particularly unusual species of ant as they don’t have queens, instead, all females are capable of reproducing.  They build their nests in the base of trees and don’t travel that far from them in search of food.  They are omnivores but use their venom to subdue their prey when catching live insects.  Their sting can be extremely painful, with severe pain lasting for around two days in some cases.

Carpenter ants (camponotus ligniperda) are widespread around the world and get their name from their ability to build their nests in wood, often chewing their way through it until they have hollowed out a section to build in.  Although they prefer dead wood they often build their nests in houses which can seriously compromise the structure of the building, which is the reason why they are commonly classed as a pest.  Carpenter ants are commonly black or dark brown and are often 1 inch long.  They are a particularly aggressive species and fiercely defend their nests if they are alarmed or feel threatened and they often kill worker ants from other species if they get too close to their nests.

One of the largest species of ant is the bullet ant which regularly reaches lengths of around 1.2 inches.  They are found in the rainforests of Central America and South America where they build their nests at the bottom of trees.  Bullet ants are a reddish-black color and get their name from their extremely painful sting, which has often been likened to that of being shot.  They also produce poneratoxin which is a neurotoxin and creates paralysis and pain in the affected area.  Also, bullet ants are one of the main predators of the glasswing butterfly.

The largest ant in the world is the giant Amazonian ant which can reach the impressive size of 1.6 inches in length.  Found only in South America, these huge ants are happy to live in both the rainforest and in the coastal regions.  The females are jet black while the males are a dark red color and they can be territorial when faced with other ants.  The giant Amazonian ants commonly make their nests in the soil and don’t travel much further than 30 feet from them when searching for food.  They eat a wide variety of plants and insects as well as spiders, snails, and crickets.

Bonus: The Largest Ant Colony in the World

The largest ant colony in the world is the Argentine super colony, which measures 3,730 miles (6,004 km) in length. The colony stretches from near the city of A Coruna, Spain to near Genoa, on Italy’s coast.

The Argentine ant is an invasive species to Europe. Once the species landed on European soil, it formed two super colonies, with the larger colony comprising the largest cooperative unit ever recorded! Other large ant colonies include:

What is The ‘Ant Death Spiral’, and Why Do They Do It? 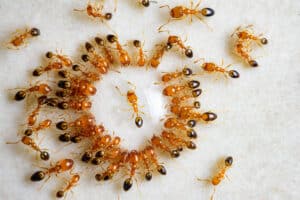