Chameleons of the sea! Prey
Crabs, squid, shrimp, forage fish such as anchovies, and even smaller flounders!
Fun Fact
Chameleons of the sea!
Average Spawn Size
Up to 4 million
Habitat
Near shore during summers and offshore during fall and winter
Predators
Monkfish, sharks, rays
Diet
Omnivore
Common Name
Fluke and Summer Flounders
Special Features
Can change color and texture like a chameleon!
Location
Off the U.S. and Canadian Atlantic Coast
Slogan
The chameleon of the seas!
Group
Flatfish

Click through all of our Fluke Fish (summer flounder) images in the gallery. 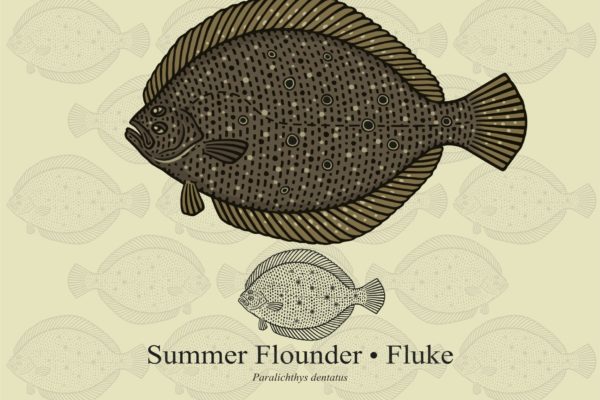 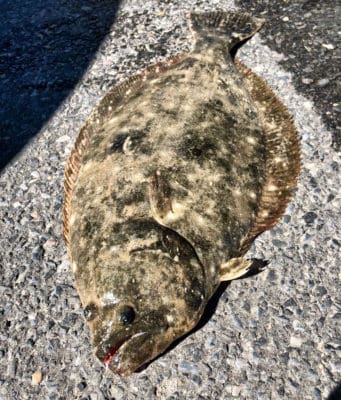 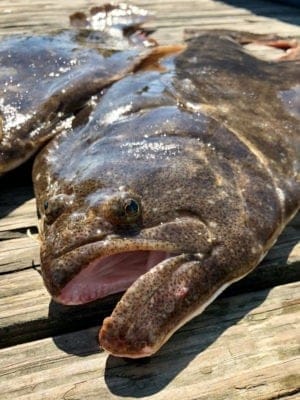 View all of the Fluke Fish (summer flounder) images!

The fluke fish (also known as summer flounder, Northern fluke, and Hirame) is a fish that is found in abundance across the United States’ eastern seaboard and is an important fish for both commercial and recreational purposes.

The scientific name for fluke fish is Paralichthys dentatus. They’re also often called ‘summer flounder,’ but in the United States East Coast they’re most commonly referred to as ‘fluke.’

Fluke fish are in the order Pleuronectiformes, of which there are 3 suborders, 7 families, 13 subfamilies, 117 genera, and 540 species (Eschmeyer).  This order is commonly grouped together into what’s called ‘flatfishes.’ Their family is Paralichthyidae, which is large-tooth flounders and contains approximately 110 species.

The oldest fossils of flatfishes emerged shortly after the extinction of the dinosaurs in the Paleocene epoch (65 to 57 million years ago).

Fluke fish females can reach a size of about 3 feet in length and weigh beyond 20 pounds. In 2007, a New Jersey fisherman captured a 24.3-pound fluke, although the recognized record fluke still belongs to a 22.7 pound catch off Long Island in 1975. Due to their importance in commercial fishing, few individuals reach these maximum sizes. Like most fish, flukes experience dimorphism where females are larger than males.

Like other ‘flatfish’ that have flat bodies and remain near the ocean’s floor, the fluke has brown coloring that matches the sea bottom. However, the species can also adjust their color to better match their surroundings and blend into their environment! Fluke fish also have spots on their back that can help distinguish the species.

In 1989 the NOAA estimated fluke stock had dropped to a total biomass of 7,408 metric tons. By 2003 that number had rebounded all the way to 69,153 metric tons. The bottom line is that populations of the species have rebounded dramatically and today are considered ‘not overfished’ by the NOAA.

The habitat of fluke varies by time of year. During colder months fluke fish will move offshore to depths of up to 600 feet. During the spring and summer, fluke fish move into feeding grounds closer to shore that are also shared by juvenile fish.

The fluke fish can be found from as far south as Florida and reaches as far north as Canadian maritime provinces such as Nova Scotia. In general, as fluke fish age they tend to move into more northerly shallow feeding grounds. This leads to larger fluke fish often being caught in areas like New England as they contain more fully-grown fish.

Fluke fish hunt by utilizing their incredible camouflage. The fish lay on the bottom of the sea, often burrowing into sand until only their eyes are exposed above the sand. When prey approaches, the flounder quickly bursts forth from its hiding spot and strikes at prey that can include crabs, squid, shrimp, forage fish such as anchovies, and even smaller flounders!

While juveniles, fluke fish face a number of predators that inhabit shallow coastal waters. Bass, sharks, and toadfish will all hunt juvenile flounders. In addition, the species faces threats from other, larger bottom-dwellers such as monkfish, skate fish, and also rays.

Spawning occurs during colder months – fall and winter – when the fish move offshore to water temperatures often between 33- and 50-degrees Fahrenheit. The colder conditions increase plankton biomass and give fluke fish larvae an improved chance of survival. Sexual maturity is reached by 3 years of age, with larger females releasing more eggs. It’s estimated the largest flukes can release nearly four million eggs. As larvae mature, they follow ocean currents to inshore estuaries and other habitats where they continue developing.

Like other flatfish, the larvae of fluke fish look quite different than when fully grown. Their eyes look like many other fish, with a pair on each side of their head. As the fish grow, their left eye migrates to the top of their head and their skull twists so their jaw lays perpendicular to their body. Fluke fish can live up to 14 years, but rarely live past 10.

Fishing for flukes is popular as they move inshore during the popular summer months on Atlantic beaches in the United States.  They can be caught off piers, from the shore, or offshore fishing off a boat.

The taste of fluke fish is very mild, and the texture considered mild. In addition, flukes are a lean fish. Per 100 grams they have 91 calories, 1.2 grams of fat, and 18.8 grams of protein. The fish is often served with simpler preparations such as with lemon or butter.

How do you fish for fluke fish?

The most common spot to fish for flukes is around inlets near the coastline. However, they can be caught off piers and even from beaches. Large hooks are suggested when casting for flounders as they can be quite aggressive. Be sure to check for local regulations on size and bag limits before fishing for flukes!

What is a fluke fish?

Fluke fish are also known as summer flounders and are flatfish that live from Florida into Nova Scotia. Because flukes have a very mild flavor, they’re a popular fish to catch recreationally. Fluke fish have a flat body and distinctive appearance. They can reach up to 20 pounds, though most fish that are caught weigh significantly less.

The most common weight to cook fluke fish is by baking the fish and preparing with lemon and butter. The fluke is known for a mild flavor that leads many to enjoy it for its lack of a “fishy” taste. Its low-fat and high in protein, with around 90 calories, 19 grams of protein, and just one gram of fat per 100 gram serving.

No. Fluke fish estimated biomass (a measure for the number of flukes in the ocean) saw dramatic declines in the late 1980s due to overfishing and other factors. However, stricter limits have helped the species rebound. Today, fluke fish are listed at Least Concern.

What's the difference between Flukes vs. Flounders?

What is the largest fluke fish ever caught

In 2007, there was a 24.3 pound fluke caught off New Jersey. However, the catch was disqualified from record books after the fisherman revealed she rested her pole on the rail of her boat while reeling the fish in. The largest recognized fluke catch is a 22.7 pound fish caught off Long Island in 1975.

Fluke Fish (summer flounders) are Omnivores, meaning they eat both plants and other animals.

What Kingdom do Fluke Fish (summer flounders) belong to?

What phylum do Fluke Fish (summer flounders) belong to?

What class do Fluke Fish (summer flounders) belong to?

What family do Fluke Fish (summer flounders) belong to?

What order do Fluke Fish (summer flounders) belong to?

What genus do Fluke Fish (summer flounder) belong to?

In what type of habitat do Fluke Fish (summer flounder) live?

Fluke Fish (summer flounder) live near shores during summers and offshore during fall and winter.

What are some predators of Fluke Fish (summer flounder)?

What is an interesting fact about Fluke Fish (summer flounders)?

Fluke Fish, or Summer Flounders, are known as the chameleons of the sea!

What is the scientific name for the Fluke Fish (summer flounder)?

The scientific name for the Fluke Fish (summer flounder) is Paralichthys dentatus.

What is the lifespan of a Fluke Fish (summer flounder)?

Fluke Fish (summer flounders) can live for up to 14 years.