Kangal as a Pet:

Click through all of our Kangal images in the gallery. 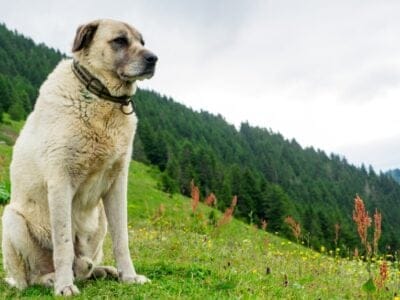 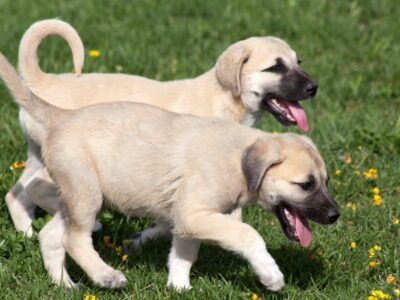 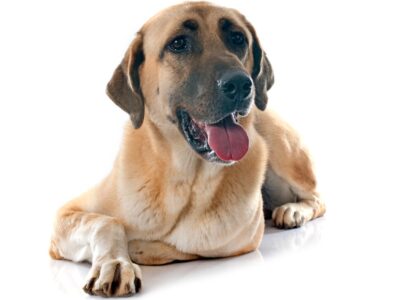 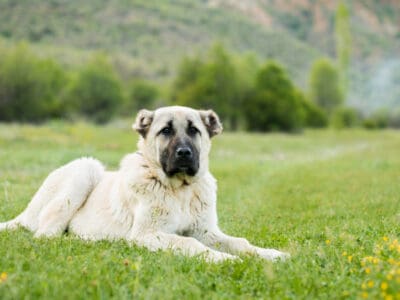 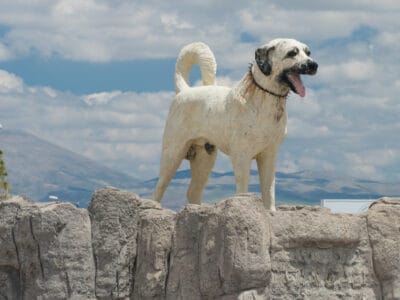 View all of the Kangal images!

The Kangal is the national dog of Turkey, where the fawn-colored and black-masked breed originated in the province of Sivas. These canines are bred for protective abilities that make them valuable for livestock managers and security forces. In fact, the dogs can protect herds, properties, and people from humans, jackals, wolves, cheetahs, and lions common to Turkey and Africa where they are highly popular.

Often called “Anatolian lions,” the breed is thousands of years old. It is considered smart, swift, agile, and quick, and it’s also known for having one of the strongest bite forces of all dogs.

The Kangal, also called the Anatolian shepherd, is highly protective and loyal, often being used for security or protective purposes. But owners must take great care in the training of their smart, defensive, and independent Kangal. When properly trained and under the care of an experienced owner, the shepherd is friendly and good with children.

The 7 Different Types of Kangals and Kangal Mixes

Some American-bred Kangals are descended from the breed’s first two dogs. These were brought to the United States in the late 1960s by a US Navy Lieutenant formerly stationed in Turkey. Those two dogs, Zorba and Peki, had their first litter in the U.S. in 1970. Shortly thereafter, a breed club was formed. But since the 1980s, buyers seeking Kangals more often import the breed from Turkey where the dog has lived since the 12th century.

Kangal breeders from multiple nations have long fought each other over who truly has pure-bred lines. Much of this in-fighting comes from Americans breeding the dogs without a clear understanding of the dog’s storied history or regional Turkish shepherd dog varieties.

For example, American dogs called Kangals sometimes have long hair, different coat colors, and color patterns. But Turkish breeders stand by the dog’s thousands of years of history as a short-haired breed with a specific coat appearance. In fact, many American importers have diluted the U.S.-based Kangal bloodline by importing dogs mixed with the Akbash shepherd from a nearby region of Turkey.

Health and Entertainment for your Kangal

Many people believe a Kangal is “perfect” in its protective abilities and should not be bred with other types of dogs. But some of the most popular mixes produced with the breed include:

Owning a Kangal: 3 Pros and Cons

There are some pros and cons to owning a Kangal. These include:

The Kangal is not known to have many health issues. In fact, they are considered among the healthiest breeds of dogs. But some of the most common concerns they face are entropion, hip dysplasia, and lipoma.

Entropion is an eyelid deformity causing the eyelid to turn inward. This enables the hairs of the face to rub against the eye, leading to discomfort and inflammation. Two of the most common signs of this condition are excessive eye tearing and squinting. Surgery can correct the problem.

Hip dysplasia is common in large breed dogs like the German shepherd. This condition causes abnormal growth of the hip joints, starting in puppyhood. As the dog grows and ages the condition worsens, eventually leading to lameness. Anti-inflammatory medications and surgery are two options for correcting hip dysplasia.

Lipoma is a condition involving the growth of fatty lumps on the chest and abdomen, just under the skin. Although most of these lumps are painless and benign, they can grow quite large. A veterinarian can remove lipomas if necessary.

As a summary, the most common health issues a Kangal faces include:

The Kangal’s temperament, personality, and behavior are some of its most distinct characteristics. In fact, these are features that typically lead owners to choose Kangals. But for some potential owners, these traits are not as desirable.

Kangals are loyal, well-adjusted, and even-tempered, yet highly protective. It is their protective personality that makes them great security dogs, K9s, and livestock protection dogs. When raised in a domestic setting and properly trained, an Anatolian has extremely patient behavior around kids. However, if the dog detects the owner’s personality as submissive or weak, the Kangal assumes the position of pack leader or the “alpha.” This leads to difficulties in managing the dog’s behavior because of their free-thinking intelligence. For the dogs to readily accept visitors and being around strangers, it is important to socialize them around people and other animals from a young age.

How to Take Care of Kangals

Kangals are large breed dogs with a range of considerations and factors for owners, from puppy age to adulthood. They make great pets but have many needs specific to the breed. These unique factors include their large size and weight, appetite, exercise requirements, and tendency toward having hip dysplasia. They also are free-thinkers needing proper training.

U.S.-born Kangal dogs frequently start their lives as puppies on an Americanized diet of their mother’s milk, followed by puppy kibble during weaning and thereafter. Adult dogs are also generally fed kibble formulated specifically for growing and mature pets. But in Turkey where many of these dogs originate, they eat a very different diet.

In Turkey, a Kangal eats yal. Yal is a barley flour and hot water mix made into dough. This mix sometimes includes yogurt or other nutritional supplements. They are also fed 25 grams of meat each day. Three times weekly, Kangals in their native land are provided with boiled bones to help their oral structures properly develop.

Owners of Kangals can choose to feed their dogs traditional diets or those bought off the shelf in grocery stores. But the best diet for a puppy and adult of this breed includes food high in calcium along with a good balance of carbohydrates with proteins and fats.

True Kangals have short hair. This makes grooming easier for owners than for large breeds with longer coats. It is important to brush the dog’s coat at least once a week. Bathing two to four times per year is good enough to keep their coat healthy. But these dogs can get quite dirty and may require more frequent bathing if they live indoors. When grooming a Kangal, it is important to check their eyes for signs of eyelid inversion or related inflammation.

This breed is known for its intelligent yet free-thinking nature. It can assume the alpha dog position in a household easily if the owner does not act as the alpha. This can lead to willful behavior with the dog taking over the household.

Because of this tendency toward willfulness and the breed’s natural defensiveness, it is critical that owners seek to properly train their dogs. This training and socialization should start in the puppy weeks and continue into adulthood.

The breed is smart, so they learn well. But owners or other trainers have to perform as the leader of the pack without submissive behavior in the eyes of the dog.

Kangals are large dogs. This makes taking them outdoors and letting them stretch their legs very important, particularly since the breed has a tendency toward hip dysplasia. Owners need to exercise their pets for two hours each day, allowing them room to break into full stride and play at top speed. Playing fetch is a great activity. The breed also makes great companions for runners or hikers.

In the puppy stage, it is important to start the dog’s obedience training. Doing so early will help owners avoid any undesirable behaviors like chewing, general misbehaving, or aggression. Because the breed tends toward free-thinking, free-wheeling behavior, early training can curb this streak. It is also important to have the dog around other pets, neighborhood dogs, and people from a young age toward healthy socialization.

Kangals make loving companions and patient playmates for children when they are raised around kids or socialized from a young age. With obedience training, this breed can play with children for hours while remaining loyal and protective over kids’ safety.

Dogs similar to Kangals include German shepherds, Mastiffs, and Akbash.

Popular names for Kangals include:

Guardian of the Flock

The Kangal is known as the “guardian of the flock” because they prove highly effective in protecting flocks of sheep, goat flocks, and cattle herds from wild predators. They can fight and win against some of the world’s deadliest animals such as African lions, cheetahs, wolves, buffalo, and coyotes. They have an innate loyalty, bravery, and protective streak rare among dogs.

View all 29 animals that start with K

How much does a Kangal cost to own?

Kangals are typically born in litters of five to 10 puppies. How many puppies are born in a region or to an individual breeder can affect their price, but they typically cost about $1200 to $2500 each from a professional kennel. They can fetch as much as a price of $4000.

Puppies of this breed typically cost between $1200 and $2500 each. But their price can be as much as $4000 per puppy from a reputable kennel.

Is a Kangal good with kids?

Kangals are good family dogs that show patience, loyalty, and love for the children in their families. They are good with children when provided with proper training and behavioral guidance from a young age. This guidance should include socialization with animals and people of all ages.

How long does a Kangal live?

The life span of an Anatolian shepherd Kangal dog is about 12 to 15 years. They do not tend to suffer breed-specific health problems beyond hip dysplasia, lipomas, and entropion. Their actual life span comes down to diet, exercise, and general health.

What is a Kangal dog?

A Kangal, also called an Anatolian shepherd, is a Turkish breed that dates back to about 1200 AD. The dogs are related to the Mastiff and are considered a Mastiff breed. They are widely known for their protective behaviors, strong bite force, and excellence in protecting herds from predators.

Are Kangal dogs legal in the US?

They are legal for ownership unless otherwise dictated by community or neighborhood mandates. Some communities enforce “large breed” dog ownership rules. This makes it important to do research before buying a Kangal puppy.

Is the Kangal the strongest dog?

They are not the strongest breeds but do prove highly protective. Their bite force is among the strongest of all dog breeds. This makes them formidable opponents against big animals like bears, lions, and wolves.

Is a Kangal a good family dog?

They are good family pets when provided with proper training and socialization. Although they have highly protective tendencies, these behaviors can be curbed through obedience training. They are patient, loving, and loyal to their family owners.