Closely related to the Piranha

Click through all of our Silver Dollar images in the gallery. 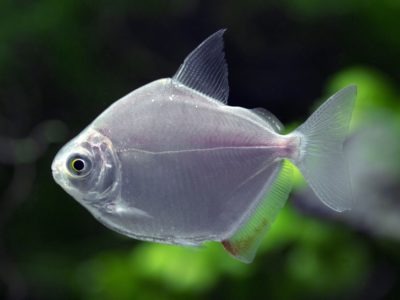 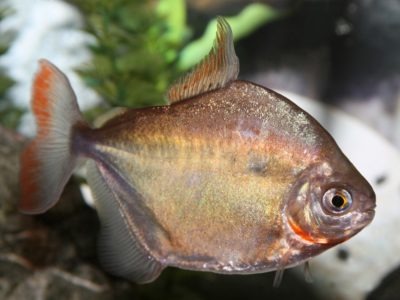 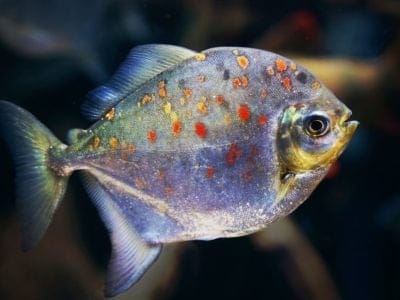 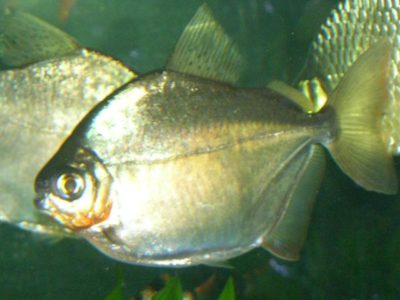 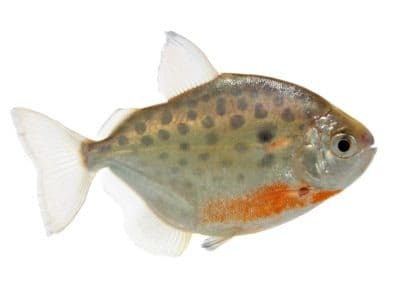 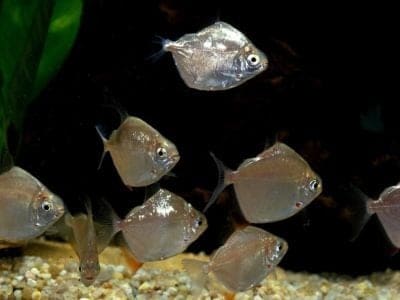 View all of the Silver Dollar images!

The silver dollar fish is a fish that is endemic to the rivers and tributaries of South America.

Although closely related to the piranha, silver dollar fish are generally peaceful. People don’t tend to fish for or consume them, but these freshwater fish are popularly kept in aquariums around the world.

That being said, the most common fish that are considered to be silver dollar fish are Metynnis argentus and Metynnis hypsauchen, which are virtually identical to one another. The primary distinguishing feature between the two is the presence of black patches behind the eyes and on the body of M. hypsauchen.

This fish comes by its name honestly. The name for the most common species, Metynnis argentus, translates as follows: Metynnis means “with plowshare,” which indicates a flattened appearance; argentus means “covered with silver,” which belies the fish’s silvery appearance and coloring.

These fish are members of the family Characidae, which consists of 217 genera and 1,464 species of fish. Within the two primary genera, Metynnis and Myloplus, there are 14 and two described species, respectively. Some notable species of these fish include:

As its common name implies, these fish looks uncannily like a large silver dollar coin. These fish have round, laterally flattened bodies, are very deep-bodied, and grow to an average of 6 inches in length. Their overall coloring is silvery, but slight hints of green and blue tinting can be seen in the right light conditions.

Males and females look largely the same. However, males have fins that are slightly longer and that are tinged red.

These fish are not popularly consumed by humans, so they do not face the risk of being overfished. However, official estimates of total population numbers for these fish are not available. In the wild, these fish are endemic to South America; in particular, they are found in Guyana and in the Amazon east of Rio Negro to Paraguay. It is believed that they may be endemic to the Tapajos River basin in Brazil as well.

In the wild, these fish prefer rivers that are dark and filled with debris, including peat, gravel, rocks, and driftwood, which make for good hiding places. They prefer moderate water flows, and they thrive best in water with a pH level of between 5 and 7, a hardness of up to 15 dGH, and a temperature of between 24° and 28° Celsius, or 75° to 82° Fahrenheit. As pelagic fish, these fish spend most of their time near the surface of the water.

What Eats The Silver Dollar?

The primary predators of these fish are larger fish, reptiles, and birds. Humans do not enjoy fishing for or consuming these fish, so they face no risk there.

What Does The Silver Dollar Eat?

Although these fish are technically omnivores, they skew more toward being herbivores than anything else. When they do consume other animals, they tend to prey on worms and small insects.

These fish reach sexual maturity at about one year of age, or when they reach approximately 4 inches in size. In the wild, they spawn in groups in wooded, heavily vegetated, shallow waters in flooded rivers and tributaries. Males court females by chasing them around before shimmying up alongside them. Females release their eggs – around 2,000 or them – near or in floating plants. Males then fertilize the transparent, slightly yellow-colored eggs, which then fall and float off into the water. The eggs hatch in approximately three days and the resulting fry are able to free swim in six to nine days; they reach adult size at about six to eight months of age.

In captivity, these fish lives for an average of 10 years.

These fish are not popularly fished or consumed by humans.

Official estimates of the total population of these fish in the world are not available.

Where is the silver dollar fish found?

In the wild, the silver dollar fish is endemic to the rivers of South America. In particular, it is found in Guyana and in the Amazon River basin east of Rio Negro through to Paraguay. It may also be endemic to the Tapajos River basin of Brazil.
Otherwise, the fish is popularly found in home aquariums around the world.

How big do silver dollar fish get?

The average length for the most common species of silver dollar fish, Metynnis argentus, is about 6 inches. One of the largest types of the fish, Myleus rubripinnis, can grow to up to 22 inches in length, however, so sizes can vary significantly from species to species.

Is the silver dollar fish aggressive?

Despite being closely related to the piranha and the pacu, which are known for their fierce aggression, the silver dollar fish is overwhelmingly peaceful by nature. When feeding, however, the fish can become aggressive to a certain extent. However, compared to a pacu or piranha, their aggression is mild. Although they are omnivores, it is rare for them to actually attack or prey on other creatures.

What do silver dollar fish eat?

Silver dollar fish are omnivores, but they skew heavily toward being herbivores. Therefore, they primarily consume plant matter and vegetation in the heavily wooded and vegetated rivers where they live. They will also opportunistically eat worms and small insects from time to time.

After being laid by female silver dollar fish, eggs take about three days to hatch. From there, the resulting fry is able to free swim within about six to nine days. They reach full adult size by the age of six to eight months, and they attain sexual maturity by the age of one year.

What is the lifespan of the silver dollar fish?

In captivity, the silver dollar fish has an average lifespan of about 10 years.

What Kingdom do Silver Dollars belong to?

What phylum to Silver Dollars belong to?

What class do Silver Dollars belong to?

What family do Silver Dollars belong to?

What order do Silver Dollars belong to?

What type of covering do Silver Dollars have?

Silver Dollars are covered in Scales.

What are some predators of Silver Dollars?

Predators of Silver Dollars include large fish, birds, and reptiles.

How many babies do Silver Dollars have?

The average number of babies a Silver Dollar has is 2,000.

What is a distinguishing feature of the Silver Dollar?

How many species of Silver Dollar are there?

There are 16 species of Silver Dollar.

What is the biggest threat to the Silver Dollar?

The biggest threats to the Silver Dollar are large fish, birds, and reptiles.

What is the optimal pH for a Silver Dollar?

How do Silver Dollars have babies?