Discover 8 Edible Insects You Can Eat

iStock.com/Eileen Kumpf
Share this post on:
More Great Content:
What Kills Bed Bugs Instantly?
How To Get Rid of Roaches Overnight
Carpenter Ants vs Black Ants: What’s the…
Where Do Bees Go In The Winter?
The 10 Largest Grasshoppers In The World
Types of Beetles: The Complete List

Everyone in school knew that one child who, on the spur of the moment or not, would “eat a bug” during recess and would do anything to startle others. It turns out that eating bugs is not only widespread in most of the world, but many insect species are also prized as a delicacy. More and more people have caught on and want to try some for themselves. Websites dedicated to edible insects are popping up all over the internet. Eating bugs is currently quite popular. Even popular Youtube shows like Good Mythical Morning make eating insects entertaining! If you’re feeling adventurous or simply want to prepare for an extreme situation, here are some of the insects you can snack on!

There are many edible ant species, with leafcutter, honeypot, and lemon being some of the more well-known. A hot ant soup helps the Chinese stay warm in the cold. We already have a delectable bug that can be caught almost anyplace in the world!

Although you can use your fingers to catch the ants, a stick could be quite helpful. Ants can be consumed raw, provided you make sure they are dead first to avoid getting bitten, although you might prefer them after boiling them for six minutes to neutralize their acidity.

Asian nations including Thailand, Malaysia, and Japan all have a thriving cicada industry. Although there is no one right way to serve them, it is stated that deep-frying them and serving them with a sweet mustard sauce makes them taste very good. Eastern regions of the United States are home to edible cicadas, which are best consumed soon after they molt for the flavor that most closely resembles asparagus.

You can get grasshoppers and crickets almost anyplace, and they are incredibly high in protein. There are even companies that have been making snacks out of these little critters.  The majority of grasshopper and cricket species can be eaten.

Try buying some cricket flour or powder from the grocery store to give it a try without having to pick the legs out of your teeth. Cricket powder is extremely high in protein, tastes somewhat nutty, and has baking qualities that are comparable to those of ordinary flour. If you do want to go wild, keep in mind that you should cook them first because they may contain nematodes.

There are a few species of grasshopper that are not safe to consume, despite the general rule. Avoid brightly colored creatures that could make you ill, such as the eastern lubber, found in some other southern states.

In addition to being a common street snack in China, scorpions can also be found in the southwestern states of California, Arizona, New Mexico, and other regions. They have a slight crab flavor. Make sure to remove the stinger first if you plan to eat a scorpion. Typically, the top two or three segments of the tail are where the venom is created and stored.

Moreover, be sure to prepare them! The venom’s deadly effects are typically neutralized by cooking, but an allergic reaction is still possible. You won’t necessarily get stung by a scorpion after it has died, unlike a bee or wasp. It might be advisable to stay away from these if you’ve never eaten a scorpion before. In a circumstance when you need to survive, you might not have a choice.

Because of their abundance in the spring and summer, when they are easiest to catch, dragonflies are at their best for consumption. When they are still in the nymph stage, they are much less difficult to catch, but once they are adults, it can take a bit of work. Did we mention that they are also delicious?

You can eat these critters raw, but it could be easier to get them to go down after you cut off their wings and legs. They only need to be heated for a few seconds to kill any bacteria you might not want to stomach. You can visit China or Indonesia to get your dragonflies made for your consumption.

Termites are frequently consumed all throughout the world, particularly in regions where termite mounds are present and they are simple to capture. Termites are relatively toxin-free because they feed on wood. Adults with wings have the ability to fly. In their larval stage, they are simpler to catch. The queen is regarded as a delicacy in various cultures. Termites, like ants, can be consumed raw, roasted, boiling, or baked.

Do you remember dreading the scene in The Lion King when Timone, Pumba, and Simba eat bugs? These are the slimy, yet satisfying insects they munch on! Typically, when someone uses the word “grub,” they’re referring to a beetle’s larval stage.

Over 344 grub species, such as the witchetty grub in Australia, palm weevil grubs in several Asian nations, huge water bugs in North America, and mopane worms in Africa, are eaten around the world. While some of them are big and juicy like rhinoceros beetle larva, others are little and crisp like mealworms.

Are worms considered to be bugs? No.  But they can be eaten. These have undoubtedly been used for more play than actual eating. But now that you’re here, things are about to get different. In an emergency, you might try scavenging for these squirmy treats. Perhaps seeing them as free-range, extremely fresh spaghetti will make them easier to swallow. Before eating them, don’t forget to squeeze out the excrement. Happy eating!

Believe it or not, we as humans can’t just pick up any insect and eat it. There is a handful we should avoid due to potential toxins.

Red fire ants, which have been documented in the southern United States since the 1930s, are expected to eventually spread to the East Coast. Despite the fact that a fire ant cannot kill a person on its own, they are recognized to be one of the most violent insects that exist, They’ll really start pursuing you. Due to their propensity for destroying everything in their path, they are one of the top ten hazards to agriculture. Fire ants swiftly establish numerous satellite colonies, and if an animal topples their mound, “they’re going to get you.”

These can be found as close as the southern section of Maryland, so they aren’t as far away from Loyola’s campus as you might want to believe. When there are only a few, it is not fatal. However, if the cow walks on any, a chemical signal called an alarm pheromone is emitted from the venom gland, preparing the colony for a mass attack.

They will bite you and sting you since they have a real venom gland and venom that comes from their saliva. So you’ll receive two doses. Small children or people with weakened immune systems may thus be at risk.

Is there any reason why people around the world eat insects? Believe it or not, you don’t have to be lost in the wild to resort to chomping on a variety of bugs. Let’s take a look at some of the advantages of snacking on the safe insects listed above.

Insects that are edible typically have a good quantity of nutrition, including both macro- and micronutrients. When it comes to protein, some insects, like crickets, are extremely amazing. For instance, one cup of cricket flour has 81 grams of protein! While only six grams of protein are included in a standard all-purpose flour.

Gets Rid of Pests

Looking to rid your organic garden of those pesky grasshoppers? One of the most obvious advantages of eating edible insects is that it’s a risk-free method of assisting in the reduction of plant pests without the use of harmful insecticides. Throw them in the air fryer, toss on some salt, and snack while watching your favorite show!

Naturally, farming bugs requires a lot less area than farming much larger animal protein sources like cows. Additionally, compared to many animal food sources, bugs are reported to turn what they eat into protein with a lot higher efficiency. In particular, it’s said that bugs need 12 times less grain than calves need to produce the same amount of protein per pound.

Additionally, insects require around half the quantity of food that pigs and chickens do in order to provide the same amount of protein for their consumers, pound for pound. Overall, eating insects is seen as having little influence on the ecosystem. 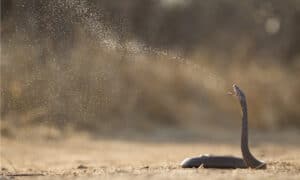