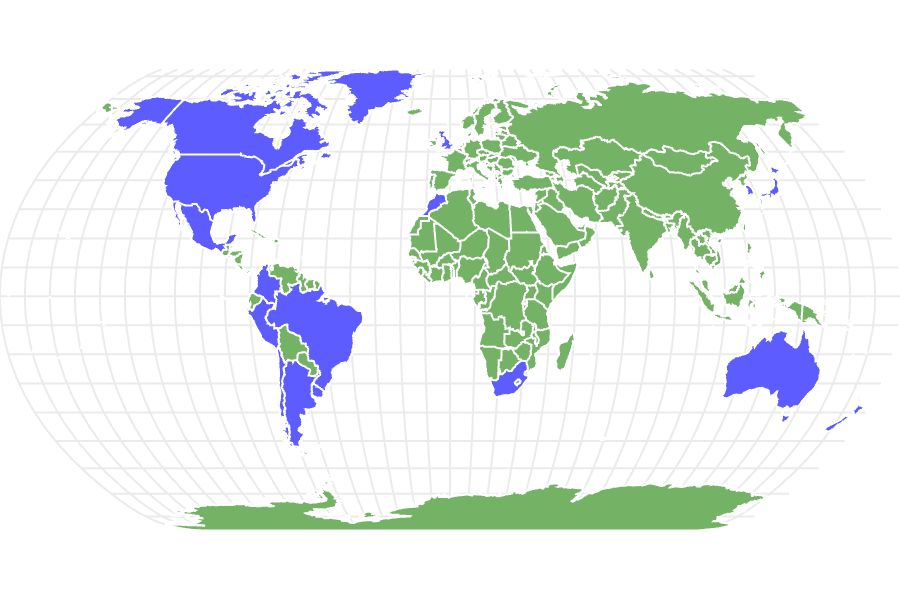 View all of our Mallard pictures in the gallery.

View all of the Mallard images!

With an appropriate tailwind, the mallard can travel hundreds of miles a day.

The mallard is the most familiar and recognizable duck in the entire world. Found almost anywhere in the Northern Hemisphere with a sufficiently large body of water, it is a type of dabbling duck that feeds near the surface of the water. The mallard has a long and complex history in human culture as a source of food, the target of hunters, and even occasionally as a pet.

Where to Find the Mallard

Mallards are found all across the Northern Hemisphere. Its natural range includes North America, Europe, Asia, and parts of northern Africa. They’ve also been introduced into Australia, New Zealand, and South America. Their preferred habitats are lakes, ponds, streams, and wetlands.

Mallards conceal their nests within heavy vegetation close to the water where they live and feed.

The scientific name of the mallard is Anas platyrhynchos. Anas, which means duck in Latin, is a genus of 31 or so dabbling ducks found all over the world. Platyrhynchos is a combination of two different ancient Greek words: platus, meaning wide or flat, and rhunkhos, meaning beak.

The mallard is a medium-sized bird, measuring 20 to 26 inches, with a long neck, rounded head, webbed feet, and rather stout body. This species has a strong degree of sexual dimorphism, meaning that the sexes look quite different from each other in size and color. The male has the distinctive green or blue-headed plumage, the white ring on the neck, the brown wings and breast, the grayish body, and more green colors on the back of the wings. The female, by contrast, has light brown plumage with dark brown markings or stripes on the body, wings, and top of the head. Both sexes have yellow or orange bills and feet.

The mallard is a highly social species; outside of the breeding season, they form large flocks of varying sizes to forage and roost together. Mallards make use of numerous vocalizations and body language to communicate with each other. For instance, when dealing with a threat, the mallard will first display an open bill and then push up against the intruder with its chest. The females do most of the quacking, whereas the males are usually silent except during fights.

The mallard is an omnivorous bird. It feeds by a method called dabbling in which it tips forward in the water and eats anything just below the surface.

What does the mallard eat?

The mallard’s diet consists of insects, worms, snails and slugs, and all sorts of vegetation. Basically, it will opportunistically eat almost anything it can.

The mallard is currently considered to be a species of least concern by the IUCN Red List. While they are hunted in the millions every year for sport, they seem to reproduce rapidly enough to maintain numbers. Another significant threat to them is the loss of their natural wetland habitats, but fortunately they appear to have adapted well to human-made ponds and lakes.

What eats the mallard?

The mallard is preyed upon by red foxes, coyotes, wild cats, and numerous birds of prey. The eggs and young chicks are also vulnerable to raccoons, opossums, skunks, turtles, weasels, large fish, and many other animals.

Depending on their range, the mallard’s breeding season starts as early as October and lasts until March. The male initiates courtship by shaking his head from side to side or rising up in the water while flapping his wings. The female encourages this behavior by shaking her own head back and forth or paddling through the water with her head held low.

The pair usually begins nesting upon their return from their annual migration in the following spring. During mating, the blue-headed male will grip the female’s neck with his beak for stability. One of the more unusual facts about the male mallard is his corkscrew-shaped penis. It’s been hypothesized the duck’s genitals evolved as the result of a lengthy sexual conflict. Since the duck’s reproductive season is so competitive, males evolved methods to deposit sperm much farther than its reproductive rivals. This is highly unusual when you consider the fact that many birds don’t even have visible penises.

After copulating, the female produces a clutch of 5 to 15 eggs. She incubates them for up to a month before they hatch. The young ducklings follow behind the mother and do not return to the nest. They have yellow and dark brown colors that begin to change after a month or two.

It takes about three or four months for the duckling to learn the art of flying. This is just in time for them to begin the arduous migratory journey. Once they’ve mastered the route, they will tend to return to the same spot year after year. The typical lifespan of the mallard is five to 10 years. Many end up falling prey to predators or human hunters. However, the oldest known mallard lived to be around 27 years old.

It is not known how many mallards currently exist worldwide, but it is almost certainly one of the most common birds in the world. Numbers currently appear to be on the rise.

Does the mallard migrate?

Northern populations are strongly migratory, but those in the southern part of the range tend to remain in the same place.

How many eggs does the mallard lay?

The female can lay anywhere between five and 15 eggs per clutch.

How fast does the mallard fly?

During migration, the mallard maintains a typical speed of around 50 miles per hour, but it can achieve even faster speeds in short bursts.

What is the mallard’s wingspan?

When do mallards leave the nest?

The chicks leave the nest from the moment they hatch. They’re expected to follow the mother into the water.

When do mallard ducks lay eggs?

Mallards lay their eggs in the early spring.

What is a female mallard called?

What's the difference between a duck and a mallard?

The duck is a type of waterfowl that belongs to the family of Anatidae. It is characterized by a stout body, a long neck, and a broad bill with serrated edges. The mallard is a specific species of duck.

Mallards can be a little cautious around other animals, but those that live around cities tend to be more tolerant of humans. People should maintain a respectable distance from them unless they decide to approach you. Captive-raised mallards can often learn to become friendly toward people.

Do mallards mate for life?

No, mallards choose a new mate each breeding season.

What are the key differences between a mottled duck and a mallard?

The key differences between a mottled duck and a mallard are their size, color, feeding habits, migratory behavior, and clutch size.

What are the differences between a Rouen duck and a mallard?

Size and personality are significant differences between a Rouen duck and a mallard.

What are the differences between mallards and ducks?

The key differences between mallards and ducks include feeding habits, appearance, breeding, and movement in the water, among others.

What are the differences between Mexican ducks and mallards?

What are the differences between a wood duck and a mallard?

The key differences between a wood duck and a mallard are their appearance, distribution, category, and conservation status.