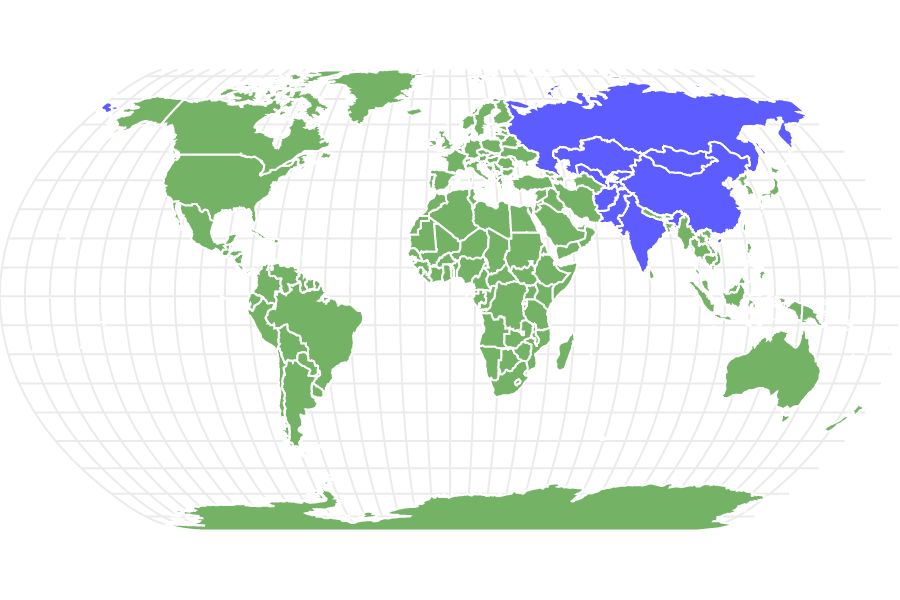 Color
Skin Type
Hair
Top Speed
43.5 mph
Lifespan
15 to 17 years, 22 in captivity
Weight
66 to 220 pounds
Height
26 to 43 inches at the shoulder
Length
51 to 65 inches
Age of Sexual Maturity
Two years for females, as long as five years for males
Age of Weaning
Five to eight months

View all of our Siberian Ibex pictures in the gallery.

View all of the Siberian Ibex images!

The Siberian ibex is the “Sure-footed Goat of Siberia”

The Siberian ibex amazes onlookers for at least two reasons. First, you can’t watch it scaling the cliffs of its mountain habitat without holding your breath. How does such a large animal climb such sheer rock faces without plunging to its death? Even baby ibexes jump from one 10,000 foot high ledge to the other as if it was a game. The other thing is the size of the male’s horns. They are huge, ridged, and curve backward. How does his small head support such horns? Their magnificence has cost many an ibex buck his life at the hands of a trophy hunter. Still, undaunted by cliffs and predators, the Siberian ibex abides.

Here are four facts to know about the Siberian ibex:

Of the nine species in the Capra genus, the Siberian ibex is the largest. Males can be 4.26 to 5.41 feet long, stand 2.62 to 3.28 inches high at the shoulder and weigh 176 to 220 pounds. Females are smaller, with an average length of a bit over 4.43 feet and a weight of 66 to 88 pounds. They are robust animals, with short, thick necks and barrel ribs. They have straight muzzles and backs and both males and females have beards and a scent gland beneath the tail. The male has a longer beard and sports a spectacular set of horns that can be nearly 5 feet long. Curved and ridged, they’re not antlers because they’re not shed and continue to grow for as long as the animal lives. Female Siberian ibex also have horns, but theirs are much smaller and thinner.

The animal has an unusual amount of names, largely because of the variations in its coat. The colors of the coat differ depending on the ibex’s age, sex, size, and where it’s found. One thing the Siberian ibex shares with other ibex is that it has a pale belly and a dark stripe down its back. Other than that, some ibexes have coats that are yellowish, dark brown, or even reddish. They also molt in the warmer months, and their summer coat is paler than their winter coat.

Siberian ibex gather in herds that can range from five to as many as 30 animals. They are segregated by sex and age. Females form herds with their kids, juvenile males form herds, and older males can form herds called bachelor herds, though sometimes males are solitary. The herds greatly expand during the rut when the males join the female herds to mate. Save the breeding season, ibex spend much of their day looking for and eating food.

The ibex is often found as high as 16,400 feet in the mountains during the summer. During the winter they come down to tundra or the alpine meadows as low as 1640 feet above sea level in search of food. They forage along the tree line but almost never go into the forest. They can be seen scraping away snow with their hooves to get at forage beneath it.

Because they have a number of natural predators, Siberian ibex are always on the lookout for danger. If they sense danger, kids bleat, and adults whistle to each other. Scientists also discovered that the animals always stayed close to an escape route.

Siberian ibex is found in Central Asia, in areas of countries such as Tajikistan, China, India, Afghanistan, Kazakhstan, Mongolia, Pakistan, and Russia. They are perfectly at home among cliffs and steep slopes of several mountain ranges, including the Himalayan, Sayan, Pamir, and Alay Mountains. These mountains are so tall and steep that it’s dangerous for all but the most surefooted predators to reach. Ibex can run as fast as 45 miles per hour and can jump over six feet straight up into the air, but they were really built to scale mountains and cliffs. This is because they have hard, sharp-edged hooves whose bottoms have soft somewhat caved in pads. As the ibex moves from one rock face to another, its hooves can hold on like a suction cup.

The Siberian ibex has an herbivorous diet, and because of that, it spends much of its day foraging. Ibex are ruminants and have multi-chambered stomachs that help them break down the tough cellulose in their diet. Fortunately, the diet is varied and the ibex has been seen to eat at least 140 different kinds of plants. They include green grass and brush, especially during the warm months. In the autumn they’ll also eat bark and stems, shoots, leaves, lichen, and the fruits of dog roses and currants. During the harsh winters, they can often be seen looking for food on the south slopes of mountains because they get more sun, which means they have more food. Ibex need water but can go for a few days without it. They also benefit from salt licks. Male ibex can eat as much as 35 pounds of food a day while females eat 18 to 22 pounds.

Besides humans, who do hunt them for sport, Siberian ibex have a good number of natural predators. The number one predator is the snow leopard, who is almost as at home on the rocky cliffs of the Himalayan Mountains as the ibex is. Though other predators take unprotected kids, the snow leopard can tackle adults. Other predators are:

The ibex is also the host of parasites. Interestingly, the presence of an ectoparasite such as a tick is beneficial to many of the birds who share the ibex’s habitat. Magpies, for example, eat the ticks that they find on the ibex. The stresses of the rut also weaken male ibex, which makes it easier for them to be taken by large carnivores.

The breeding season or rut is when the herds of ibex come together. It usually begins around October and can continue into January, depending on the weather and the area. Bucks fight for the right to mate with available females. Sometimes they’ll clash horns, but serious injury is rare. A victorious buck can guard a harem of as much as 15 does. Generally, bucks are ready to breed when they’re about five years old because then they’re large enough to battle other males. Even so, they won’t be fully grown until they’re about nine. Females can start breeding when they’re about two.

The buck will court a doe for as long as half an hour or more until she accepts him. They might need to leave the rest of the herd for a while to get away from competitive bucks and actually mate.

The doe is pregnant for about six months. About a week before she gives birth she leaves the herd to give birth by herself. Ibex usually have one kid at a time but two or even three babies aren’t unheard of. Kids weigh about 6.6 pounds, have thick coats, and can walk shortly after birth. They start growing horns when they’re about a month old. The mother rejoins the herd after about a week, but while she forages she leaves the baby in a secret spot to keep it safe from predators. When the kid joins the herd depends on how well it can maneuver over the mountains. Though it can eat grass soon after it’s born, it is weaned when it’s five to eight months old. Still, the kid may stay close to its mother for as long as a year.

Biologists believe there are over 256,000 wild Siberian ibex spread out over Central Asia. Yet, the populations are in decline, and the animal’s conservation status is near threatened. Still, some scientists do not believe it is actually endangered and place it in the least concern category.

Siberian ibex are herbivores, and they eat grasses such as timothy and oat grass and other plant materials.

Where do Siberian Ibex live?

Siberian ibex live in the mountains of Central Asia.

What do Siberian ibex eat?

How big does a Siberian ibex get?

According to the IUCN, the Siberian ibex is endangered. It was listed as near threatened as of 2021.

How many Siberian ibex are left in the world?

A bit over a quarter of a million of these wild goats is left in the world.

What is the size of the female Siberian ibex?