8 Birds That Migrate The Longest

What’s the farthest you’ve ever traveled during a single trip? For most people, the answer will be a few thousand miles. Perhaps you flew cross-country or even to another country on the other side of the world. For other people, they’ll say that the longest trip they ever took was the walk between their couch and the refrigerator. Regardless of the answer, while some humans make extraordinary voyages, our travels pale in comparison to the migrations some birds take. While some species remain in place year-round, others undertake incredibly long journeys to reach their breeding grounds. These species may circumnavigate the globe by the time they’re done, and make this voyage several times throughout their lives. That said, what are the birds that migrate the longest?

To determine the birds that migrate the longest, we’ll have to determine how far they travel throughout a single year. We’ll examine where they start and where they finish, and count the miles for every leg of their migration. By the time we’re done, you’re sure to be astounded at the sheer willpower that some of these birds exhibit. Like marathon runners, these birds just keep moving no matter how far they have to go. So pull out your jumbo tape measures, because we’re about to record the 8 birds that migrate the longest.

While most birds that migrate do so by flying, not every bird has that option. Case in point, the Adélie penguin, a flightless species that still counts as one of the birds that migrate the longest. Adélie penguins live around the coast of the Antarctic continent and are the most abundant of all penguin species. They get their name from Adélie Land, a claimed French territory on the Antarctic continent. A mid-sized species, the typical Adélie penguin stands 18 to 28 inches tall and weighs 7.9 to 13.2 pounds. Distinctive features include white rings around their eyes and feathers near the base of their bill. Their diet consists mostly of krill, silverfish, and squid, while common predators include seals, petrels, and orcas.

The Adélie penguin makes the longest migration of any penguin or flightless bird. Penguins living in the Ross Sea region make an annual migration totaling 8,100 miles. That said, evidence suggests that some Adélie penguins trek up to 10,900 miles over the course of a year. Antarctica is a shifting continent; it grows during the winter when ice proliferates and shrinks in summer.  Since Adélie penguins live near the coast, they react to the movement of the ice as it expands and contracts. This means following the ice out to their eventual winter feeding grounds and retreating back to their summer breeding territory.

The pied wheatear may be a small songbird, but don’t let its size fool you. These tiny insectivores deserve to rank on the list of birds that migrate the longest. Commonly found throughout swaths of Central Asia, pied wheaters belong to the Old World flycatcher family, Muscicapidae. Their name alludes to two of their distinct features. Pied, meaning “two-or-more colors,” refers to their striking black and white coloration. Meanwhile, wheatear comes from two Old English words for “white” and “rear,” which alludes to their white underparts. In general, pied wheaters measure 5.75 inches long. They subsist primarily on ants, grasshoppers, beetles, flies, and moths, but will also eat seeds in the winter months.

Unlike most songbirds, which only migrate north to south, the pied piper takes a different approach. It spends a large part of its migration traveling east to west, as it moves from one continent to the next without significantly altering its latitudinal orientation. The pied wheatear’s journey begins in Southeast Europe. From there it travels to China, before then overwintering in either India or Northeast Africa. In total, pied wheatears may travel a total of 11,000 miles by the time all is said and done.

The northern wheatear, also known as simply the wheatear, is the most abundant member of the wheatear genus. During summer, they range throughout Europe and North Asia, as well as parts of Alaska, Canada, and Greenland. On average, northern wheaters measure 5.7 to 6.3 inches long with a wingspan between 26 to 32 inches. They feature the distinctive white rumps common to all wheatears, along with dark markings on their wings and faces. During the breeding season, females build the nest on their own while their male partner sings to them. Northern wheaters usually build their nests inside cavities including rabbit burrows, rock crevices, or man-made openings. Their diet mostly includes insects, although they will also eat seeds when insects run in short supply.

When it isn’t flying, the pectoral sandpiper spends most of its time wading through water in search of food. This small bird belongs to the Scolopacidae family of sandpipers, or waders. It gets its name for an inflatable air sac on its throat that males use to emit a loud, hooting sound. During the summer it ranges throughout northern Russia, Alaska, and Canada near the Arctic Ocean. Most measure around 8.3 inches long, and sport a wingspan up to 18 inches. Males grow dark gray feathers on their breasts and light gray ones on their bellies. They subsist mostly on insects and small invertebrates and hunt using their keen eyesight or by probing the ground with their long long beaks.

Despite sharp population declines in recent years, the pectoral sandpiper remains one of the birds that migrates the longest. At the end of the breeding season, they abandon their summer grounds up north and head south. Those living in Northeast Asia head to Oceania, while those residing in Alaska and Canada head to South America. By the time they arrive back to their summer territory, some pectoral sandpipers will travel 18,000 miles roundtrip.

The bar-tailed godwit is another wader to make it on our list of birds that migrate the longest. Like the pectoral sandpiper, it also belongs to the Scolopacidae family, although it is part of a different genus, Limosa. Bar-tailed godwits get their name from the black-and-white bar featured on their tails and upper tail coverts. They range from Scandanavia to Alaska and live primarily on mudflats and estuaries near the Arctic coast. During the breeding season, their plumage looks rusty-red, while in winter it turns white and gray. In addition to their long legs and distinctive color, you can spot a bar-tailed godwit based on its long, upturned bill. They live off of bristle-worms, shellfish, and other invertebrates, which they find by sighting and probing the mud with their bills.

Bar-tailed godwits make a similar migration to the pectoral sandpiper, although some can journey even further. From their summer breeding grounds, some may eventually migrate up to 18,100 miles in order to reach the habitat where they will overwinter. Depending on where they spend their summers, they may end up in temperate regions of Africa, Australia, or New Zealand. That said, not only do bar-tailed godwits migrate far, they also get there quickly. They make the longest non-stop flight of any known species, which can reach up to 7,500 miles. Furthermore, they do it all without stopping to eat, which is a whole other record in and of itself.

Also known as the yolla or moonbird, the short-tailed shearwater is a migratory seabird from the Southern Hemisphere. Part of the Procellariidae family of petrels, prions, and shearwaters, it is closely related to the great and sooty shearwater. They get their name from their short tail and habit of flying with one wing almost cutting the sea surface. Short-tailed shearwaters spend their summers in the waters around Australia and Tasmania. Their diet consists mostly of fish, crustaceans, and squid, as well as shrimp and octopus. To this day, they remain a popular commercially harvested bird and sometimes go by the name “muttonbird” in Australia.

Short-tailed shearwaters mostly breed on small islands in the Bass Strait and around Tasmania. For the winter, they migrate to the Northern Hemisphere, specifically to the Aleutian Islands and eastern Russia. Before returning to their summer breeding grounds, they travel down the western coast of the United States before flying across the Pacific Ocean. Round trip, they may travel up to 27,000 miles over the course of a single year.

The sooty shearwater is another member of the shearwater family to make our list of birds that migrate the longest. It gets its name from its dark, chocolate plumage, which distinguishes it from other shearwaters. A medium-large species, a sooty shearwater typically measures around 16 to 20 inches long with a wingspan between 37 to 43 inches. Like other shearwaters, it tends to fly with one wing almost touching the sea surface while hunting. Their diet consists of fish and squid, which they catch by diving into the water to depths of almost 223 feet.

Compared to its relative the short-tailed shearwater, the sooty shearwater makes an even more incredible journey for its migration. During the summer, they breed mostly on small islands around New Zealand, the Falkland Islands, Auckland Islands, and Phillip Island. They then travel north to overwinter in the waters of the far Northern Hemisphere. Unlike some species, they do not travel as a flock, but instead, make this journey primarily on their own. By the time they return to their summer nesting grounds, they may travel up to 40,000 miles.

In terms of birds that migrate the longest, none can come close to matching the Arctic tern. The Arctic tern belongs to the family Laridae, which includes terns, gulls, and skimmers. They mostly breed in the Arctic regions of North America, Europe, and Asia, but some also nest further south. On average, they measure 11 to 15 inches long and sport a wingspan between 26 to 30 inches. Their plumage appears mainly white with some gray, while their beaks and feet look reddish-orange. Although they don’t breed every year, Arctic terns will mate for life. Their diet consists mostly of small fish and invertebrates, which they catch when flying close to the sea surface.

Over the course of its migration, the Arctic tern will traverse from one pole to the other. After the breeding season is over, it will move on from its Arctic habitat to overwinter in Antarctica. Due to their habitat of meandering while flying, their trip ends up being a lot longer than it should be. Give this habit, some Arctic terns travel up to 60,000 miles over the course of a single year. With a lifespan of up to 30 years in the wild, that means some Arctic terns may travel up to 1.5 million miles during their lifetime. This is the same as flying to the Moon and back three times.

Where Do Birds Go in the Winter? 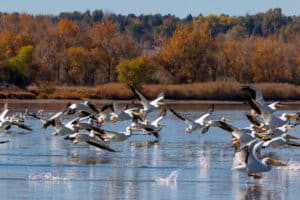