Crocodiles have existed in practically the same form they do today for the past 400 million years, but most animals aren’t similarly able to resist the tide of natural selection and environmental changes happening around them. There are 40 cat species — not even taking into consideration the various breeds of domesticated cats — naturally distributed across every continent except Antarctica and Australia. The wide distribution and wide evolutionary variances between these species — along with the difficulty in identifying a specific breed by their fossil — has made reasonable taxonomy difficult for researchers. A 2006 investigation into cat fossils suggests an explanation: that cats expanded from Asia into the Americas by crossing the Bering Land Bridge.

But while the human migration happened only 20,000 years ago and appears to be mostly unidirectional, cats appear to have migrated back and forth as many as 10 times beginning nine million years ago. As successful and highly mobile carnivores, cats would have often been at the mercy of prey migration patterns and shifting populations. Factor in felines’ generally high rates of reproduction and lack of natural predators, and you’re left with a species that’s driven to expand and capable of quickly adapting to suit a new environment. With this DNA evidence in hand, scientists are piecing together the history of these various lineages, and some fascinating stories are developing. Cheetahs are both the fastest land mammal and a highly specialized predator seemingly built exclusively for the Sahara Desert, but they appear to have speciated in North America before somehow making the long migration back to Africa three million years ago.

With four species split across both sides of the Bering Strait, lynxes have one of the more interesting stories. Age has a part to play in that. The progenitor of all modern lynxes — the species Lynx issiodorensis — didn’t develop until four million years ago in North America. Since they propagated across both sides of the Bering Strait before Beringia would disappear for the last time, we can reliably witness how isolation and environmental factors can splinter one specialized arctic carnivore into four distinct species. This is the story of how lynx cats became what they are today.

Characteristics of the Lynx

Few people would describe the lynx as an ordinary cat. While each type of lynx cat species is distinctly adapted to their habitat, the facts show that all of them have kept a few unique characteristics that both distinguish them from other cat species and demonstrate enough flexibility to persist across multiple species in multiple habitats. One of the more notable features across all Lynx cats is their stubby tails. There’s some contention in the community as to whether these developed as an evolutionary advantage or were merely a genetic defect with neutral survival potential. It’s generally recognized that lynxes have managed to survive without a tail because they spend most of their time on the ground and typically only jump in trees to perch. Since the cat’s long and highly articulated tail is often used for balance, lynxes lose little by not having it. It’s been theorized that lynx cats with shorter tails were naturally selected because long, moving tails can resemble the gestures of snakes and could potentially alert prey.

All types of lynx cats have unique physiological characteristics that make them well adapted to being ground hunters, and particularly for hunting in the snow. The uncharacteristically long legs of the various lynx species allow them to quickly close the distance between prey — a trait perhaps necessitated by a bobcat’s lack of vertical advantage when hunting. And though they don’t regularly prowl treetop canopies, the facts show that they do perch — either as a way of searching for prey or evading predators. But those dancers’ legs are most valuable when trying to bound through snow and ice, and it can give lynx a fighting edge when chasing lightweight prey like hares and mice that can more capably flee.

Most types of lynx cats still have a special tool for navigating snow in their DNA: wide, round feet that are covered in fine fur that disperse this predator’s weight more evenly and function quite like snowshoes. The thickness of a lynx’s fur — as well as its size, colors, and lifespan — can tell us a lot about the animal’s habitat, but the scientific community still isn’t entirely sure what purpose the black tufts on the top of every lynx’s head serves. The prevailing theory is that they complement the notably long facial whiskers of Lynx species and allow them a more sophisticated sense of what’s happening above them.

The Canada lynx is a case study both in how animals can evolve to fit very specific environmental niches and the direct effect that prey population fluctuations can have on their health. The diet of the Canadian lynx typically consists of 75% snowshoe hare, and researchers have noticed that lynx and hare populations in Canada are in incredibly tight sync with one another. They’ve even been able to identify recurring and linked population cycles that recur every decade.

Litter sizes can range from one to two but have been shown to adjust for periods of feast or famine. But the ultimate arbiter for survival is the winter. Adult Canada lynxes are inclined to survive even a harsh winter while cub mortality rates will stay proportionate to prey availability. The presence of a healthy adult population allows lynxes to quickly scale up when hares begin to repopulate.

Canada lynxes and snowshoe hares have seemingly evolved together. The Canada lynx has maintained and expanded on the features its ancestors developed to survive in the arctic, while the snowshoe hare can list the ability to shift colors to its defensive mechanisms. Every winter, these meek herbivores shift from brown to white. Unfortunately, climate shifts in habitats are affecting these seasonal pigment changes. This makes the snowshoe hare more vulnerable to predators, but it also forces this type of lynx cat to increasingly compete with other predators — like wolves, wolverines, and coyotes. The Canada lynx has developed exceptional instincts for detecting white hares in the snow. Without that advantage, the facts lean towards the larger and more organized predators outperforming them.

If the Canada lynx is a demonstration of how interdependent two species can become and how both can persist regardless of radical feast and famine cycles, the Iberian lynx shows what can happen when an unknown disaster enters the equation. Scientists aren’t quite sure what caused Iberian lynx populations to become so concentrated in Spain and Portugal, but their habitats once extended into France. The Iberian lynx is among the smaller species on the list of lynx cats. Their colors and some features have adjusted to better suit their more moderate climates, but they hunt similarly to the Canada lynx. They also primarily subsist on rabbits.

But the introduction of a disease known as myxomatosis — which was released by a scientist looking to control the pests in his garden — has decimated the rabbit population in traditional Iberian lynx habitats. They face other complications as well. Habitat loss and climate change weigh heavily on the odds for the Iberian lynx. Increasing the difficulty of their recovery is a peculiar behavior where cubs will often fight to the death between the age of two and three years old.

After an Iberian lynx breeds, they typically give birth to three cubs. There’s almost always a fatality before the end of the third year. Despite the threats, it faces, dedicated and targeted conservation efforts have seen promising successes. Since hitting a low global population of roughly 100 a hundred animals, the population has now grown to over a thousand.

The Eurasian lynx is the largest of the lynx species, and that’s allowed it to pursue a more generalist approach when hunting for prey and the ability to compete more readily with other predator species. This has allowed the Eurasian lynx to have a range that extends through all of Europe, Central Asia, and East Asia. Thanks to poaching and organized government efforts to kill these predators, their local population sizes can vary widely throughout the habitat range. But they’ve proven to be resilient survivors and are the only lynxes to preferably feed on ungulates like smaller deer. But they may rely on smaller prey like rats and rabbits when times are lean.

Eurasian lynxes also have some of the longest lifespans of the Lynx species and can live to reach 17 in the wild. A comparative lack of natural predators when compared to other lynx species and the wider range of food options could have a part to play in the Eurasian lynx’s resilience. But they’re also remarkably successful at hiding among their environment. Territories tend to be strict and exclusive, and these solitary predators are effective at finding a well-concealed den and staying out of sight while on patrol. Activist efforts have brought the Eurasian lynx back throughout much of Europe.

The bobcat is the smallest type of lynx cat breed, with a height that rarely reaches two feet — and they’re also the breed that’s most moved away from their origins as an arctic hunting cat. The descendants of the bobcat arrived in North America in a migration that preceded the arrival of the Canada lynx. When they found themselves isolated by climate conditions, they grew to adapt to more temperate climes. That’s allowed them to spread throughout huge swaths of the United States and Mexico, but they rarely like extending their hunting range into snowy regions. The bobcat’s body has adapted away from paws designed for deep snow and coats built for the excruciating cold. Understandably, bobcats rarely venture into the territory of Canada lynxes, but there are accounts of hybrid breeds. They sometimes also mate with domesticated cat breeds.

The bobcat has given up a lot of what its ancestors had, but it’s become highly adaptable to a broad climate range at the same time. They have the lynx’s traditionally long hind legs and use them effectively to both pounce on prey and escape into tree limbs. This is the smallest cat on a shortlist of lynx species, so it’s surprising to see how opportunistic the bobcat can be as a predator. They’re known to feed on small prey like squirrels and rats, larger prey like chickens and ducks, and even the occasional ungulate like deer. They’re also not above scavenging another animal’s meal. Bobcats can choose to be picky because of their extraordinary appetite. They can go days without eating and then will binge on as much food as possible. Larger prey is often hidden away to be consumed over time.

Next Up: What Is The Bite Force of A Lion? 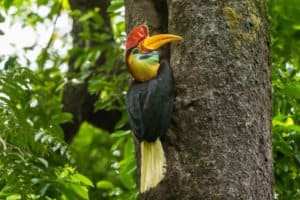 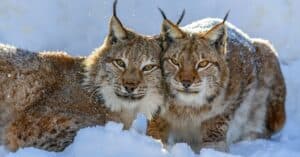